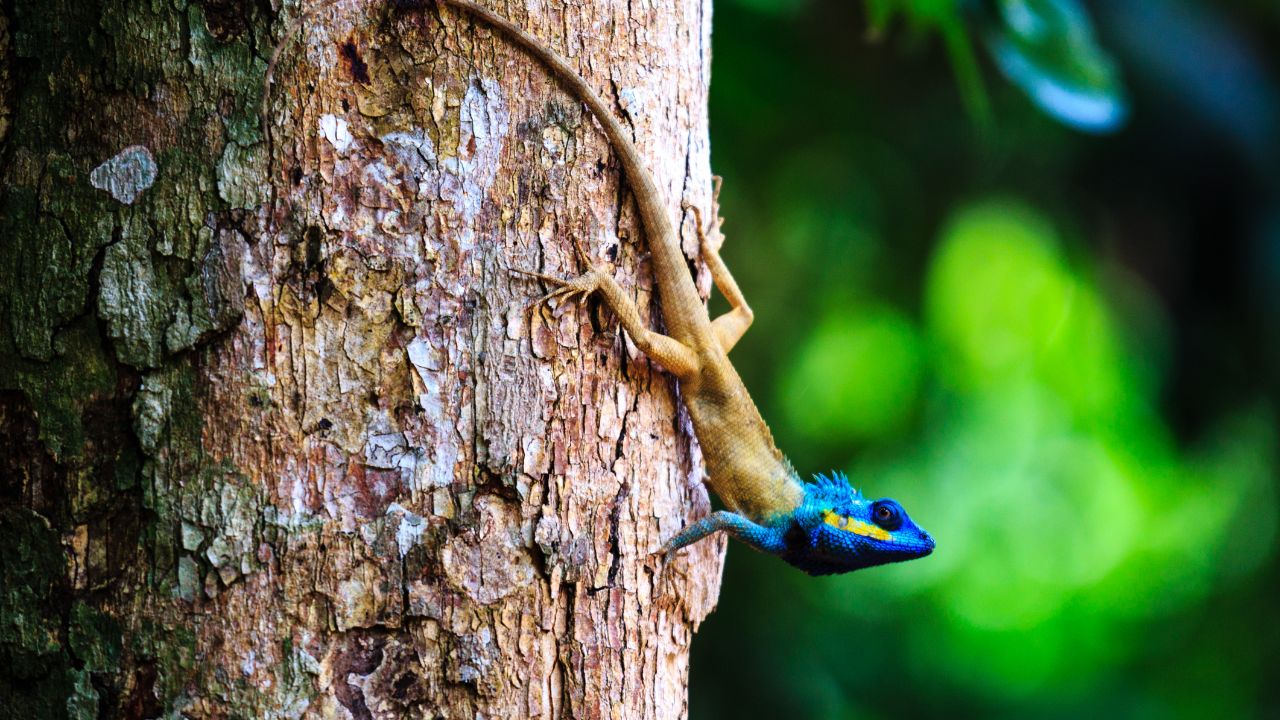 We don’t know where all these came from, but tons of people roam with the same misconception that chameleons can change their body color to match any background. Well, that’s what happens when you see the National Geographic channel in ‘mute’ mode. But can these color shifters actually change to any color?

The answer is, No, they can’t. The chameleon’s ability to change color is limited to certain tonalities. They use their skin tone to camouflage themselves from predators, but it also expresses how they’re feeling at any given moment. They could do so to signal danger, express interest in a potential mate, prepare for conflict, or any number of other behaviors.

But how do they change their color so perfectly? And why can’t they change to any color? Well, these answers are kind of tough to slip into one or two sentences. Scroll a bit down, and you’d find out why we’re saying so in the first place.

Is it True That Chameleon Can Change to Any Color?

If you’re waiting to see a big ‘YES’ on this, we’d have to disappoint on this one. No, they can’t just dress themselves up in any color. Yes, chameleons can really alter their skin tone. Actually, The popular belief is that chameleons can transform into any hue in order to hide from predators. There is some truth to this, yet it’s still a common misunderstanding.

However, different kinds of chameleons have a limited palette from which they may choose the relevant color. Although, it’s true that they can utilize their skin color to their advantage while hiding from prey or predators; this chameleon-like ability is more of an emotional thing than a practical adaptation.

Their short flash of color might serve many purposes, including warning off potential predators and signaling interest in a potential mate. But that’s not all. It comes in handy for indicating their willingness to engage in a fight with another male too.

The veiled chameleon, the famous reptile with the mint green tint, is capable of a limited range of color changes. What they can do best is to go from green to deeper brown and all the hues in between. On the other hand, the panther chameleon has a greater variety of hues and tints, whereas its typical colors include bright reds, yellows, and blues.

And if you’re asking about the Ambiliobe panther chameleon, in our opinion, it’s the most versatile reptile when it comes to the ability to change color. Of course, it won’t adapt to its surroundings by changing hues, but it does show off a rainbow of beautiful colors.

How Do Chameleons Change Color?

It’s natural to be impressed by a chameleon’s ability to change its appearance by a shocking degree. Skin cells of chameleons which are known as chromatophores, and chromatophores in various layers of skin contain distinct color pigments, allowing the animals to change their appearance.

But how fast can they change these colors? Well, within 20 seconds only! But how? Well, to find that out, you’ll have to click here.

What Makes the Chameleons Change Their Color?

There’s no way to deny that, for chameleons, changing color is the most efficient form of communication. However, their hues reveal with absolute clarity how the chameleon is feeling at any given moment. So, the question is – what exactly are they trying to convey with all those distinct hues? Well, the reasons can be –

When a chameleon needs to display its dominance, it will adopt more vivid hues. But when a chameleon, especially a male one, feels threatened over their territory, it may become rather hostile. As a result, they change colors rapidly and dramatically, from red to blue, yellow, green, and even white.

They increase their visibility in their native environment by wearing brighter colors. This basically serves two purposes – one, guarding their region, and two, giving their opponent advance warning. One of the males will fade up their color to gray as a symbol of defeat. By the way, during mating season, you might also encounter their hostile demeanor. They typically act in this manner to attract potential mates.

If your chameleon is showing deeper colors than usual, there’s a high chance of the reptile experiencing some kind of stress or excitement. In such cases, you’d notice that the lizard’s coloration is more vibrant than usual, particularly dressing up in reds, greens, and blues. And when the reptile’s neck or other vulnerable areas become black, it’s probably because the lizard feels unwell or afraid.

By the way, you can sit back and relax if it’s roaming with its natural color on. But if you see red/black stripes on the reptile, it’s probably in its ‘angry mode’. If it’s covered in brown, though, the lizard is definitely feeling down or depressed. For them, it can also be a symptom of brumation.

To attract a partner, chameleons will sometimes display a more vivid pattern of colors. By the way, the particular hue they adopt to attract females might vary by species. Usually, the male chameleons dye up parts of their bodies with colors like blue, red, or yellow.

If a female chameleon is uninterested in mating or has already mated, she may temporarily modify her appearance by switching to a different hue. A black stripe across their torso may appear to scare off potential suitors from the male species.

When a chameleon is scared, for example, it experiences a spike in stress levels. Therefore, if they’re displaying their more subdued tones, it’s safe to assume that they’re either in a state of shock or have recently been the victim of an attack.

In such events, they can even go for darker colors to fit in with their environment. If you’ve gone through research on these reptiles, you should already know how useful this strategy is for them when they’re in danger. In the absence of a sense of security, they will remain in this hue indefinitely. As a last resort, they may roll into a ball if they sense the situation is deteriorating.

Is your chameleon feeling comfortable or not? Well, you can easily say that by looking at the way it blends into its natural environment. They tend to choose earthy tones like green and brown in such s. So, if you see the reptile with those colors all over its body, you can be certain that it is in a calm state of mind.

Is It Possible for All Chameleons to Change Color?

More than a hundred species of chameleons are found in the wild, with the majority hailing from Madagascar, Africa, and Asia. Guess what? They can all alter the color, albeit the color chart itself may still be subjective.

When transformed, male chameleons have more vibrant colors compared to females. What can you say? After all, the skin tones of female chameleons are often more muted than those of males.

If you’re looking for a reptile with the most vibrant hues, you need to go no further than the panther chameleon. Their panther-like patches make them nothing but instantly recognizable. Males of this species can easily reach lengths of up to 20 inches in their native habitat, but they tend to stay a little smaller in captivity.

When compared to panther chameleons, however, Veiled chameleons are not quite great on the ‘catching the color’ part. Hey, wait for a second! If you think their color won’t surprise you, you’re going to be disappointed for sure.

On top of that, their bony protrusion, known as a casque on the top of their head has given them a perfectly unique look. This beautiful casque, which is designed like a crown, collects rainfall and directs it to their mouths.

And the female Veiled Chameleons? Well, the females tend to have softer, more subdued color patterns than their male counterparts. For obvious reasons, female chameleons of all species have smaller casques than males.

Young Jackson’s Chameleons start out life as brown babies but mature into a rainbow of colors. At around four or five months of age, Jackson’s chameleons begin to change color from their basic brown to black, teal, green, and even yellow. Just like males of other chameleon species, they also show off more of their bright colors, especially colors like blue and yellow.

Physical limitations are quite normal to have for any living being, including chameleons. Though their color shifting was initially seen as ability with no limit, allowing them to match any background. Well, now you know that’s definitely not the case. But still, they can come up with mesmerizing colors that can easily deceive any predator walking around them.