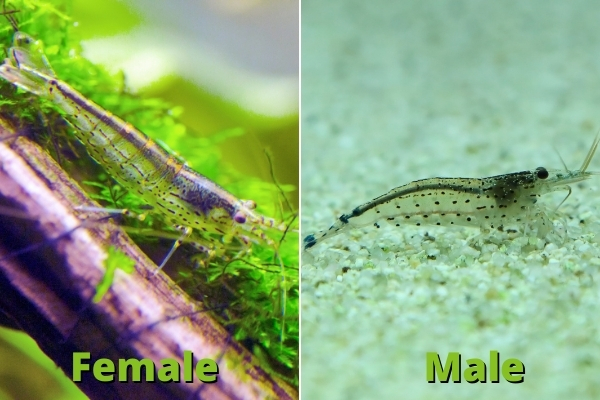 Unlike many other dwarf shrimps, identifying the male and female Amano Shrimp is much easier for their prominent physical difference. However, beginner shrimp keepers may often get confused to distinguish between the male and female counterparts while buying or breeding Amano shrimps for the first time.

Let me discuss these differences in detail.

Take a look at the following picture. Both the shrimps are mature for breeding where the female Amano shrimp is much larger.

Types Of Dots On The Exoskeleton

However, if you cannot be sure from their size, examine the visible dots on their exoskeleton. The translucent body of Amano shrimps has made it easy to distinguish between the two types of dots on the males and females.

The lowest or second-lowest row of dots along the body on the females will be like long irregular dashes or some oval/distorted circles like this picture.

On the other hand, in the males, the dots are clearly distinct from each other and evenly spaced on their exoskeleton. Examine the following picture. The dots are not stretched out like those on their female counterparts.

Note: However, the young female Amano shrimps (those have not been matured) may not have developed these long and broken dashes and they will have the dots like their mature male counterparts.

Though the difference of the dots is prominent, you can be over-confirmed by the next characteristic.

The female Amano shrimps possess a saddle or egg nest underneath their belly. The females carry their eggs in this egg nest until they are hatched. The egg nest is glued to the forked paddle-like swimmerets attached to their abdomen. Look at the following picture.

About 1000-3000 eggs are glued onto this swimmeret. The eggs appear in dark moss-green color at first. As they mature, they become yellowish-brown color gradually. The female carries the eggs for about 5 weeks and just after releasing the larvae, they tend to mate again and carry the next batch of eggs.

So, if you are buying mature female Amano shrimps, it is very easy to recognize the female ones as they carry eggs most of the time. And if you have already bought the shrimps, the eggs will be visible in the female shrimps soon with their swelled abdomens.

A Few Other Facts

Besides these, the female Amano shrimps have a thicker body and an ivory stripe has run down the length of their back.

Some male shrimps (especially the darker shrimps) may also possess this ivory type stripe, but that will be noticeably fainter than that of a female Amano shrimp.

You will find the mature female Amano shrimps a little more colorful than the mature male shrimps.