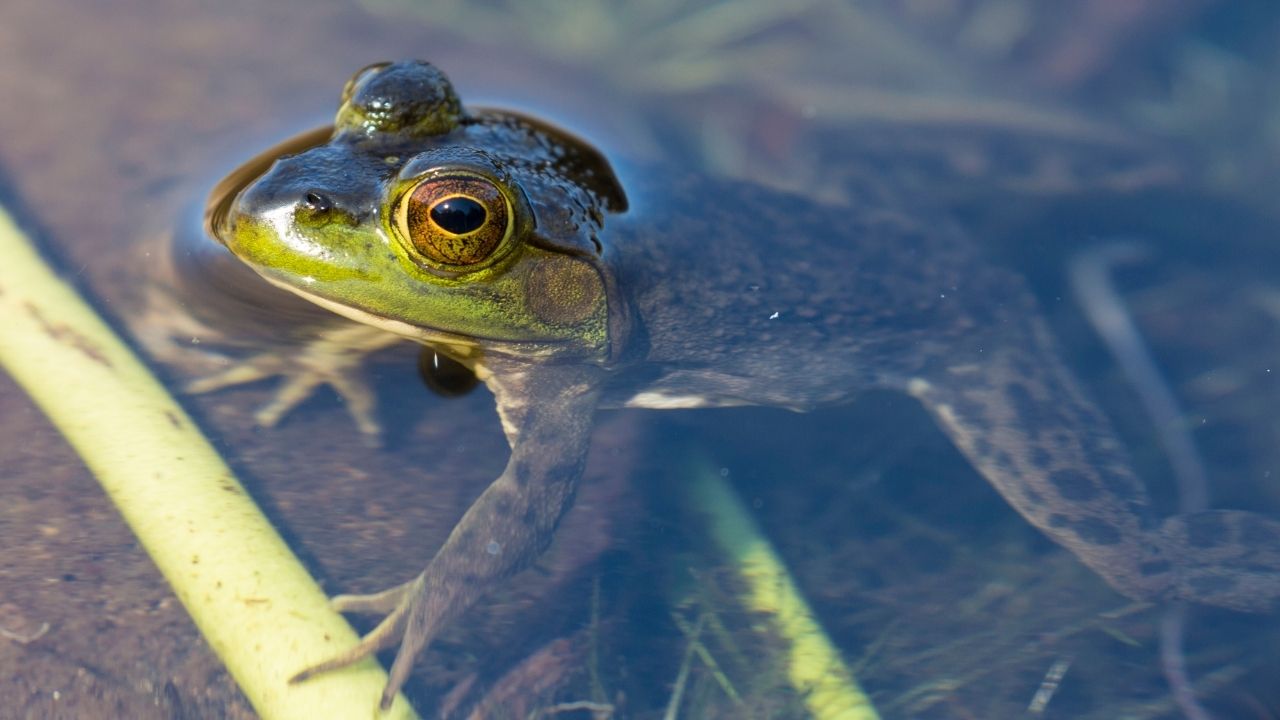 People may have interests in everything related to frogs if they are frog lovers. However, there isn’t much research about frog poop. Sometimes, people do not recognize the frog poop after seeing it for the first time. So, a curiosity may pop into the mind- what does frog poop look like?

Like other animals’ poop, frog poop looks dark brown or black. It is somewhat of a cylindrical substance that can be as big as one-fourth of the frog’s size. The frog poop remains damp in a fresh state. Afterward, it becomes dry.

In this article, I’ve explained the features of frog poop, the difference between frog poop and the poop of other animals, its possible danger, and other interesting facts.

So, you must not miss this article if you want to details on this interesting topic.

The answer is yes. Like all animals, frogs need to excrete from time to time.

These amphibians pass up undigested waste materials from their foods, bacterial biomass, other cells, mucous, and water through their poop. If frogs do not poop regularly, the frogs will become sick.

If you know the natural state of frog poop, you’ll be able to detect any health issues by noticing the poop. Hence, you must know what frog poops look like.

You may find frog poop as a whole or partial substance. The color and consistency of the frog poop depend on the diet and hydration of the frogs.

Frog poop looks like a cylindrical substance that can be dark brown or black colored. Due to dietary changes, the frog poop may become red too.

It can be as big as the quarter size of a frog’s body. When the poop remains fresh, it may have a shiny coating.

Gradually, the shiny coating or sleek appearance fades with time. The frog poops will shrink and become dry after some time.

The poop of any animal certainly has a bad odor. Similarly, frog poop smells a pungent smell. Some people complain that frog poop has a more intense odor than dog poop. If you do not clean the frog poop immediately, the whole place will start to stink.

How Often Do Frogs Poop?

It depends on the age and diet variations of the frogs. Usually, baby frogs poop more often than adult frogs.

The younger frog tends to poop almost every day. These frogs eat a lot and have stronger digestive power than adults.

On the other hand, adult frogs do not eat regularly. Also, these frogs tend to eat bigger insects. Thus, adult frogs require some time to digest their food.

The researchers found that the adult frogs poop 1-2 times a week. Sometimes, these frogs can go up to two weeks without excreting. However, the frequency of excretion depends on the appetite of the frogs.

Why Do Frogs Have Big Poop?

If anybody does not recognize frog-poop, they will not believe such big poop is the poop of frogs. The size of a frog poop is one-fourth of the entire body of the frog. It’s pretty natural to wonder why frogs have big poop.

Generally, frogs have larger stomachs compared to their size. They do not know when they may get their next meal. So, frogs tend to consume all share of heavy meals, whatever they find in the wild.

In comparison with body size, frogs can eat and digest lots of foods. It results in big poop.

How Do You Make Frogs Poop?

Sometimes, undesired blockage appears in the intestines of frogs. As a result, frogs may face difficulty in excretion. To help your constipated frog, you can take a few steps.

Can You Get Sick From Frog Poop?

If the frog is infected, there will remain risks of getting sick from the poop of the infected frog. In this way, a human can also catch salmonella from exposure to frog poop. The researchers found Enterococci colonies in the feces of frogs.

According to frog species, there might be a few variations in frog-poop. Let’s check some of these frog poops.

African dwarf frogs are low-maintenance pets. That’s because these frogs do not require much food. As a result, they produce little waste.

The poop of an African dwarf frog is a pallet-like shaped, dark brown substance. If your dwarf frog excretes long-stringy poop, your frog may suffer from health issues.

Tree frogs are arboreal frogs. These colorful frogs can grow up to 1-5 inches. Adult tree frogs produce one big poop at a time. If the tree frog is smaller than 1 inch, such a small frog may produce several infrequent droppings of poops.

Are you an owner of tree frogs? Then, you should go through this article about the tree frog care guide.

Since dart frogs are so tiny frogs, their poops look like little droppings. Depending on the variation of diet, the coloration of the dart frog poop may be dark brown, reddish, or black. If the dart frog is young, it’ll poop one time per day.

Check out this article to know whether you can keep dart frogs as pets or not.

Like other frog-poop, Pacman frogs excrete shiny and dark brown colored poops. Since Pacman frogs can reach up to around 6 inches, you should not be surprised to see 1.5 inches of large poop of Pacman frogs.

The adult Pacman frogs may go once every 2-4 weeks. But, the baby Pacman frog may excrete every day or every other day.

Is Frog Poop Dangerous To Humans?

Frog poop isn’t directly dangerous to humans. However, you should handle the frog-poop carefully.

The feces or poop of frogs are mainly semi-solid and undigested foods, wastes, and other dead cells. So, it contains parasites, hazardous bacteria, germs, and several harmful elements.

If you touch frog poop directly, the worms present in the poop may attack you. Besides, the bacteria or germs that are present in frog poop may infect humans.

Moreover, it’ll be toxic if anybody consumes a frog-poop accidentally or intentionally. After handling the frog poop, you must wash your hands well.

How To Differentiate Between Frog Poop and The Poop of Other Animals?

People often get confused with frog poop and the poops of other animals. Sometimes, it gets too hard to identify. If you know who defecates on your property, you can take action to get rid of those animals.

So, let’s check out how to differentiate between frog poop and the poop of others.

Since frogs and toads are kin to each other, their poops are identical. Initially, it’s hard to differentiate between frogs’ poop and toads’ poop. The only way of differentiation is the size of their poops.

You might have noticed that toads are bigger than frogs. Due to having a voracious appetite, toads tend to eat a lot until the food is all gone. As a result, they produce a lot of poop.

Generally, toad poops are bigger than frog poops. Not to mention, toad poops have also a stinky odor.

Another confusion arrives between frogs’ poop and mouse poop. The shape and coloration of their poop are almost similar. But, there are a few things to differentiate between these poops.

Generally, frogs tend to poop less frequently than mice. So, it might be frog poop when you see cylindrical-shaped poop as a whole.

But, a mouse leaves a few droppings on a large amount of concentration. You can find mouse poops as a group. The shape of mouse poops is roughly cylindrical, whereas the frog poops are almost pallet or cylindrical shaped.

Also, you might notice the tapper ending of the poop of mice. In the case of mouse poop, it becomes grey when it doesn’t remain fresh.

You can readily recognize which one is frog poop or snake poop. Snake poop is pretty different from frog poop.

Usually, snakes excrete moist mess, whereas frog poop is a solid substance. Instead of a piece of a large deposit, the snake leaves small pallets of poops which are similar to small logs. Snake poop is kind of a mixture of urine and poop.

So, if you find slimy poops like bird droppings in a mess of liquid, it may be poops of snakes. Besides, it’ll be chalky when it gets dry.

How Do You Clean Frog Poop?

If you come across frog poop, you must clean it as soon as possible. Sometimes, people wonder about the right way to clean frog poop. In such a case, you can follow the following methods.

How To Keep Frogs From Pooping On The Porch?

It must be irritating to find frog poop on your porch. If you want to keep frogs from pooping on the porch, you should take a look at the following suggestions.

Since frogs get attracted by insects, you should reduce the presence of insects around your house. So, keep minimum lighting in the yard, nearby poolside, and other places.

If there are lots of bushes, shrubs, and greeneries around your porch, the frogs will make a comfortable zone to play around these greeneries. Besides, such bushes attract insects. Eventually, frogs come after these insects and might poop on your porch.

To prevent the arrival of frogs, you can make a barricade around your porch. You can use chicken wire, poultry netting, etc.

In addition, you can notice the possible ways of popping frogs to leave poops on your porch. According to the entry access, you can reposition the barricade.

To keep frogs from pooping, you can use repellents to deter frogs and insects. There are homemade repellents and commercial repellents.  You can use vinegar, coffee grounds, salt, baking soda, etc.

If you want to get rid of the mess of frog poops, you may want to know the tricks of deterring frogs. Hence, I suggest you go through the following link to know about 15 simple ways to get rid of frogs in your yards.

15 Ways Get Rid Of Frogs From Your Yard!