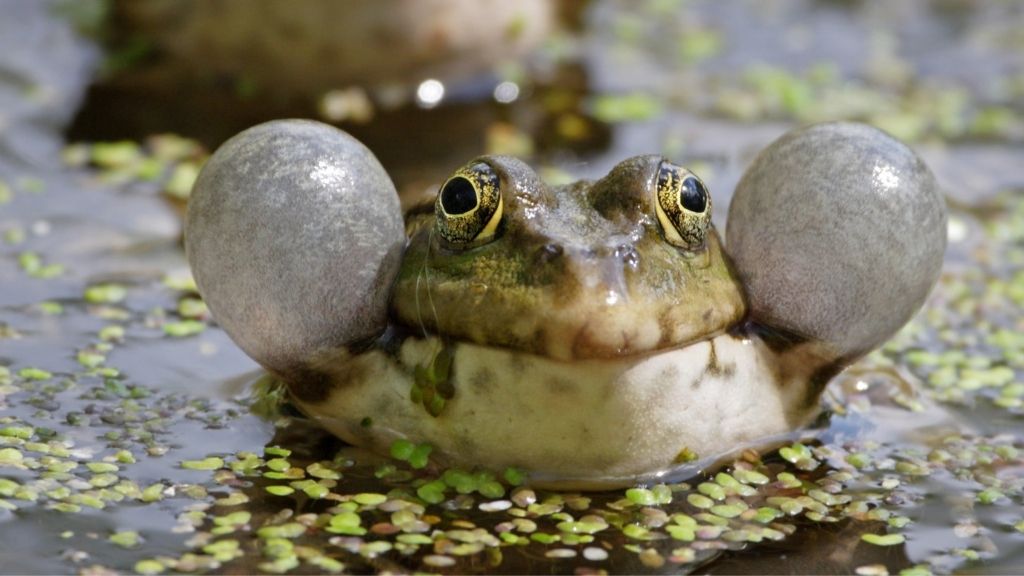 If you intend to pet a Pacman frog, you must get used to the croaking. Some people love the rainy season vibe, and so they love their frogs croaking in their homes as well. Again, as new Pacman frog owners, people often do not know when the frogs croak. Hence, I want to let you know beforehand why Pacman frogs croak and other additional information.

Without any valid reasons, frogs do not croak frequently.

The main reason for Pacman frog croaking is to seek attention from the female for mating purposes. Besides this, they croak usually during the time of their feeding or misting their enclosure. Also, rainfall, an abundance of food, noise, stress, warning other males, etc are some significant factors behind Pacman frog croaking.

If you’re keen to know details about Pacman frog croaking, this article will help you get enlightened. In this article, I’ve summed up all information about their croaking that I found out after researching a while. Hence, I urge you to go through this article and have a glimpse.

Almost all species of frogs croak. But, all the frog sound or croaking isn’t the same. All of them are unique and special, varying from their species.

Because the male frogs need to attract the female frogs for mating. For this, they use croaking as a serenade. Also, there are lots of other reasons.

How Do Pacman Frogs Croak?

If you notice closely, you’ll see a small sac in the throats of frogs. The Pacman frogs are no exception too. The frogs can stretch out their sac just like a balloon.

The Pacman frogs croak with the help of their vocal cords and vocal sacs.

In the time of croaking, the Pacman frogs breathe in and then closes their nostrils. For this reason, the flow of the air gets pushed over the vocal cords.

When the frogs slowly let the air out of the throat, the air gets vibrated by the vocal cords. Then, this sound gets amplified by their vocal sac.

In this way, the sound becomes louder and can even travel up for more than 1 mile away.

At What Age Do Pacman Frogs Croak?

Pacman frogs do not start croaking from an early age. So, you’ll never see any baby Pacman frog croak.

At the age of four to six months, Pacman frogs usually start croaking.

This is the time when the gender of a Pacman frog becomes identifiable. Croaking is also a significant gender identification sign.

For this, you just need to wait for the frogs to become at least 4-6 months old to croak.

Why Do Pacman Frogs Croak?

There are differences in reasons for croaking in the wild and captivity. Several factors are responsible for these. Hence, I’ve conducted some researches to find out why Pacman frogs croak.

Again, there are some different reasons for the Pacman frog croaking in captivity. Such as-

Any of these reasons can be liable to the croaking of your Pacman frog. Let’s get to know the details of them.

The most common reason for croaking is to attract a partner. The male Pacman frogs choose to croak as their way of calling out the female Pacman frogs. In other words, you can say that it’s a kind of their mating invitation.

The croaking chorus guides the female Pacman frogs to the mating place. Moreover, this auditory signal or croaking varies according to the species of frogs.

So, each species of male frogs ensures that they’re only attracting the attention of female frogs of their species. The same thing goes with the Pacman frogs too.

Another reason for Pacman frog croaking is stress. Whenever a Pacman frog feels threatened or stressed, the frog tends to do croaking. Even if you hold or touch your Pacman frogs improperly, they’ll feel stressed. As a result, they’ll start croaking. It’s some kind of screaming or squeaky sound.

Warning Off Their Predators

It’s pretty common to hear frogs croaking in the rainy season. In the rainy monsoon, almost all places get wet, and also the ponds get fresh water from rain. So, it becomes a perfect condition for the female Pacman frogs to lay eggs.

Moreover, all frogs are fond of humid and moist weather. The Pacman frogs are also on this list. Hence, they love to do croaking during rainfall, or in the rainy season.

Why Is My Pacman Frog Croaking In Captivity?

You might be amazed to know that the Pacman frogs croak in captivity too. Although there’s no risk of predators, an abundance of foods, threatening conditions like the wild, the frogs have a few reasons to croak in captivity.

As I stated before some reasons, let’s go through the details of the causes of croaking in captivity.

You might have already acknowledged that the humidity of the Pacman frog terrarium should be around 60%-100%. So, it’s good to mist their tank often. In the misting time, you’ll get to hear the croaking of your Pacman frog.

You might be wondering why your Pacman frog croaks in the feeding period. On the other hand, these frogs tend to croak when they’re hungry.

So, it happens pretty oppositely in captivity because your frogs may still be uncomfortable. When your frog gets comfortable with its new owner, the frog will stop croaking in the feeding time.

In captivity, it’s normal for Pacman frogs to croak. They sometimes respond in croaking after hearing some other environmental noises like barking, car honk, etc. It’s somewhat of your frog’s reaction to loud noises.

How Loud Do Pacman Frogs Croak?

In the wild, the Pacman frogs are too loud in their natural habitat. On the other hand, a pet Pacman frog may sense that there’s no presence of other Pacman frogs surrounding him.

As a result, your frog will croak less without any valid reason. Because there’s no opportunity to call out another frog to mate.

Pacman frogs can not hear the short call or low-pitched sound. That’s why they always croak in a high-pitched voice. Besides, their croaking is loud enough to hear from your neighborhood too.

But, some experienced owners shared their experience where their Pacman frogs did not vocalize much. Even if the frogs were used to croak, they made a low sound. Rather, those owners found the frogs quiet and boring.

Not croaking much or not being loud is a kind of a relief too. Otherwise, it’ll a bad idea to keep your pet Pacman frog in your bedroom. As frogs usually croak at night-time, this can ruin your sleep also.

Many people assume that both male and female Pacman frogs croak. But, their assumption is entirely wrong.

Especially, when these female Pacman frogs feel threatened, or afraid, or stressed, they make such low-pitched noises. It seems a long, low-pitched groaning.

Why Do Pacman Frogs Croak Loud At Night?

If you notice well, you’ll see that Pacman frogs croak loud at night. Well, a few factors are precisely responsible for this. Do you also want to know why Pacman frogs make noise more at night?

I’ve found out some reasons behind this act. They are-

You might have already known that Pacman frogs are nocturnal animals. This means that your Pacman frogs are pretty active at night and less active at daytime. On the other hand, these frogs sleep during the day. For this reason, they become loud at night.

Being Safe From Predators

Maximum species of frogs croak during night time because they feel safe from predators at that time. Only dart frogs dare to croak in the daytime because they don’t have any predators. So, Pacman frogs stand on the list of night-time croakers.

How To Stop My Pacman Frog Croaking?

Although you can’t train your Pacman frog to understand your signal, you still can manage to stop them from croaking.

If you look back to the reasons behind Pacman frog croaking, you’ll see their stress, discomfort, etc being responsible besides attracting female frogs.

So, the very first thing you can do to stop their croaking is to ensure a comfortable habitat.

Make sure that the temperature and humidity of their terrarium are in the ideal range. Also, provide your Pacman frogs enough food. Being voracious eaters, they may remain hungry if you feed less.

Besides, you shouldn’t keep them nearby the window. By this, they’ll hear less environmental sound. That’ll make them less stressed and cause them to do less croaking.

If your Pacman frog still does not stop croaking, you can apply another method. At first, prepare a fine mixture of salt and water. Then, pour it into a bottle and spray it all over the tank of your frog.

That’ll make the feet of your Pacman frog uncomfortable.  As a result, your frog will stop croaking automatically.

Pacman frog croaking is a natural activity. But, they croak less frequently in captivity. Hope that this article gave you a clear idea about all questions regarding Pacman frog croaking. If you totally can’t stand with their croaking, you should think twice before keeping the frogs as pets.