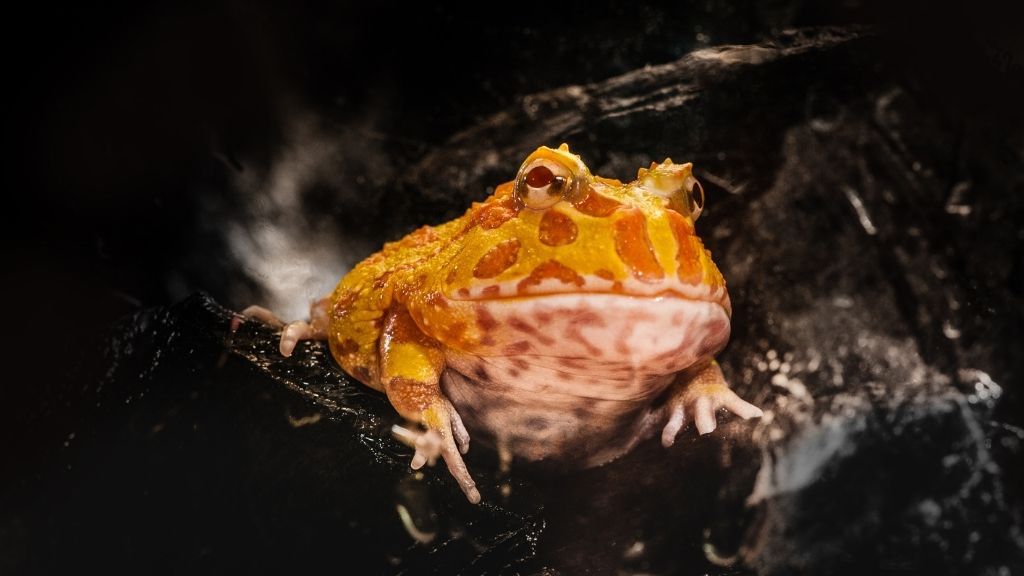 Pacman Frogs, widely known as South American Horned Frogs, are commonly chosen frog species when it comes to pets. It’s easy to see why: they have quite distinct personalities, and seeing them with their huge mouths eat is definitely amusing. Furthermore, establishing a sanctuary for it is relatively simple and inexpensive.

For these very reasons, some might be tempted to create a small colony out of them by keeping two or more of them in one habitat. However, as enticing as it sounds to have all your pet frogs together, the outcome will not be a nice one.

Even though Pacman frogs appear quiet and peaceful, they can’t be kept together with any other frogs, whether they are of the same species or different species. Because of their solitary loving and cannibalistic nature, chances are Pacman frogs will end up hurting each other or the other frogs in your terrarium.

To know more about the cohabitation of Pacman Frogs, read below!

Do Pacman Frogs Eat Other Frogs?

Pacman frogs will hunt and eat any species of frogs, including their own kinds, that might reside in the terrarium.

Because Pacman frogs are cannibalistic and predatory, in addition to being violent, they can hurt and kill other frogs. In comparison to their body size, they have a larger mouth and a ravenous appetite to match. Their diet includes whatever they can reach and fit into their mouth, even other frogs.

Pacman frogs don’t like tank mates. They enjoy solitude, so their ideal habitat includes living alone, especially in small enclosures without any other tank mates.

And although they might seem to be sitting quietly in the same spot for hours, they can turn violent when entrapped in the same enclosure with other frogs.

So, as tempted as you are to keep multiple Pacman frogs together, don’t do it unless you want to endanger the frogs’ lives.

Pacman frogs can live with tree frogs under no circumstances because their ambushing and predatory nature will always make them a threat to tree frogs.

As many kinds of tree frogs are communal because of their friendly nature and make good tank mates with other frogs, it is easy to be delusional into thinking that they will be good for co-existing with Pacman frogs as well.

However, making a community out of your tree frogs with Pacman frogs will not be a good idea because, despite the friendly nature of tree frogs, Pacman frogs won’t spare them.

Many people look for different loopholes (i.e mating season, siblings, sizes) to keep two or multiple Pacman frogs together. The temptation is understandable, especially if you are too lazy to bother with setting up different tanks for every frog. However, let’s look at the faults in those loopholes-

1. Keeping Them Together In Mating Season

Some assume that, if Pacman frogs are incapable of sharing the same enclosure, how do they mate? Well, male and female Pacman frogs can be found together in mating seasons. This cohabitation, however, is not without danger.

True to their cannibalistic nature, they even eat their partner during the breeding season, especially where there is a significant difference in size between the male frog and the female frog.

Female Pacman frogs are naturally larger than male frogs. So in times of mating, if a relatively small and young male pacman frog approaches a larger and older female frog, depending on the hunger of the female frog, it might end up eating the male frog.

Some might argue that if the rigs are siblings or have been living in the same enclosure since tadpoles, they might not be cannibalistic or violent to each other. While that might be true, I would still suggest you not take that risk and create different tanks. It’s always better safe to be sorry.

Many people try to keep two or multiple same-sized Pacman frogs together thinking if they are of the same size they cannot hurt each other. However, although it might eliminate the risk of the frogs eating each other, it does not save the frogs from hurting each other.

They are so violent that even if they can’t kill each other, they are most likely to die while trying to eat each other.

Breeding Of Pacman Frog In Enclosure

The size difference of a female frog being larger than the male is a concern while trying to make your Pacman frogs breed in terrariums. Try to keep the sizes of both females and males relatively close. However, that does not ensure the safety of the frogs.

The most effective approach is to ensure that both frogs are well fed and have fully satisfied their hunger before they are put in the same enclosure. And, under close observation, you should put them together for mating. When done, the two frogs must be removed from close vicinity and returned to their respective enclosures.

Is There Any Way Of Making A Pacman Frog Colony?

That way, the frogs don’t see each other or come in contact but remain in the same enclosure. This is also safe as they don’t get violent either.

Another option, a relatively risky one, is to grow the Pacman frogs together from tadpoles or from an early age. Also, always keep them well-fed and under observation.

What Frogs Can’t Be Kept Together?

These combinations should be avoided while making a frog community. Apart from these, you can make a coexisting terrarium for many other species of frogs.

However, if you insist on taking a risk, you have to be extremely cautious. Make sure to not put a young or small frog in the same tank as an adult and large frog, it will get eaten. It’s also important and necessary to keep an eye on the frogs to make sure they’re not attacking each other.

And during the time of the breeding season, keep them well fed before they come in contact.