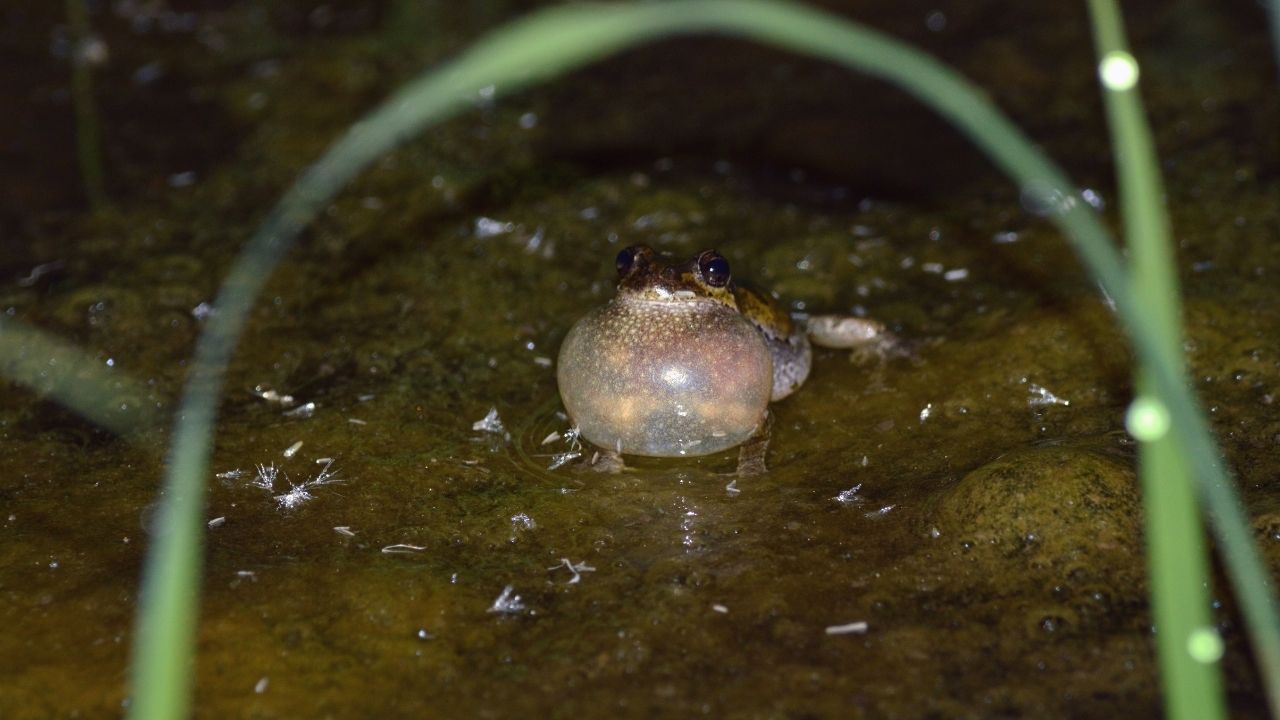 If you have a backyard pond or local creek, you may have experienced continuous irritating croaking of frogs. Have you ever wondered why frogs croak only at night? Or, why do frogs increase their croaking after a rainy day?

Because of being nocturnal animals, this is pretty usual for frogs to croak at night. In addition, frogs tend to croak to find their suitable mates, display territory, or communicate with each other.

In this article, I’ll explain in detail the reasons behind frogs’ croaking at night, not croaking during the daytime, methods to stop croaking, and so on.

So, I will urge you to go through this article if you want to know these secrets.

Why Do Frogs Croak So Loud At Night: 10 Reasons

The croaking of frogs varies according to the species, gender, and age of the frogs. Some frogs sound chirping, honking, metallic buzz, and so on.

However, you may notice frogs croaking loud at night. There are several factors behind this fact. Let’s check these out.

All frogs are nocturnal and remain active at night. Only a few frogs are exceptional by being diurnal. As a result of being active at night-time, frogs tend to hunt, communicate, make mate calls at night. It is the prime reason for hearing frogs croaking so loud at night.

Several kinds of research show that frogs can produce distinctive calls. The mating calls of frogs vary from species to species. Moreover, frogs tend to use less energy in mating calls than in territorial callings.

Generally, people can hear more croaking of frogs during the breeding season. Such is because male frogs make vocalizations to attract the female frogs.

In this way, frogs find their potential mates through their croaking. The researchers have termed it as advertisement calls too.

On the other hand, the croaking of frogs provides a hint of the physical size of the frogs. Also, it helps the female frogs identify the location of the male frogs.

Sometimes, the male frogs appear in a competition of croaking where there are fewer female frogs. In such cases, the female frogs choose mates whose mating calls are time-lengthy and more frequent.

Although female frogs remain silent during mating calls, they make a sound while mating. During courtship, the female frogs make a different noise. Several studies confirmed that this croaking encourages the male frogs during the mating rituals.

The researchers found fascinating information about frogs’ releasing calls. It happens when any frogs are grasped to mate by frogs of different species. In such a case, the female frogs want to get relief. Hence, they make a special type of croaking as release calls too.

Frogs have a natural tendency to hide from their potential predators during the daytime. Besides, the predators of frogs become less active after the sunset.

Hence, these frogs remain active and vocal at night. Since they can get blend with nature at night-time, they can readily hunt better than daytime.

So, as a part of their activity, frogs feel safer continuing their communication through croaking at night.

Along with making advertisement calls, frogs also tend to make vocalizations to claim territory. It is male-to-male competition in frogs.

Usually, frogs try to get heard among thousands of frogs. So, this can lead to real fighting to attain the potential mate. Also, the frogs may show bravery and strength by getting involved in the fight.

For this reason, frogs tend to make aggressive calls in reply to the intruders’ calls. This territorial display of croaking is usually aggressive and more symphonic than the mating calls.

It can be a signal of inviting to a certain place for hunting, proclaiming their location, and so on. Sometimes, these frogs return another call responding to a certain croaking.

On the other hand, this croaking can be a sign or warning of danger too. When frogs are attacked by their predators, they call other frogs for help.

Sometimes, it can be used to startle predators. Also, if the victim frogs become able to run away from the predators, the frogs croak to alert or warn other frogs of the potential threat.

9. Abundance Of Foods At Night

You might have noticed that there remain so many bugs and other insects at night. Such is because the air temperature becomes high at night. As a result, bugs find the ground warm and seek sources of moisture. Hence, insects become active at night.

Being insectivores, frogs need to search for their food sources. So, they find hunting easier at night and so you hear more croaking at night.

Air and water temperature, humidity, and other environmental parameters play a significant role in encouraging the croaking of frogs. Frogs prefer to come out at night at cooler temperatures. Besides, they do not thrive well in the dry wind of daytime.

However, each species of frogs can prefer a different temperature. Such as spring pepper stop croaking when the temperature reaches up to 22 degrees. Considering all environmental conditions, frogs choose to croak at night.

Why Do Frogs Stop Croaking All At Once?

You must have experienced such an incident when the frogs stop croaking all at once. It happens when frogs detect any predators nearby their location.

Since sound travels in a wave, high electromagnetic radiation causes you to hear frogs croak loudly in chorus.

When any predators like humans, birds, or snakes appear nearby frogs, the flow of sound radiation becomes hampered. As a result, the frogs can sense the presence of their potential predators and stop croaking.

Thus, these frogs stop croaking all at once and get quiet in fear of danger.

Why Do Frogs Croak Some Nights & Not Others?

Frogs do not croak all over the year.

Frogs gradually stop croaking at the end of their mating season. Also, frogs require an ideal range of environmental parameters to croak. Besides, frogs do not croak the night of full moon or windy nights.

Again, some species do not prefer to croak on a humid night. Since the vocalization can not get heard well in strong wind, frogs do not make sounds on windy nights.

Why Do Frogs Croak So Much After A Rainy Day?

You can hear frogs croak after a rainy day. Also, these frogs make a sound before a stormy day or during the rain. In simple words, rainy days make frogs happy.

Rainy days bring fresh water to pools or ponds and create moist weather. Besides, rainy days come with an abundance of frog foods. With so many blessings of rainy days, frogs tend to croak so much after a rainy day.

Due to rainfalls, various insects, worms, and bugs come out to the surface. As a result, frogs find it easier to prey on insects. In addition, this suddenly increased amount of foods acts as a significant influencer for mating.

In short, rainfalls trigger the breeding of frogs. Consequently, you find frogs more vocal after a rainy day.

What Time Of Year Do You Hear Frogs?

After a long rest hibernation period, frogs resume their activities. So, this is pretty normal to hear the frogs croaking after winter.

Spring is the breeding season for frogs. So, frogs become more vocal during the spring season to late summer for purpose of finding their potential mates.

Sometimes, the breeding season may last from March to June in the North. In addition, spring lasts from November to March in the south.

After all, this time of the year has suitable weather conditions to continue their activity. So, depending on the region, you may hear the croaking of frogs at different months.

Generally, male frogs croak for mating purposes and other reasons. Only a few female frogs of certain species can croak.

These frogs make noise as release calls too. Also, sometimes, they make a different sound while mating. However, there is a thick difference between the vocalization of male and female frogs.

Can Frogs Croak In Their Sleep?

Frogs tend to sleep in the daytime. You may find them immobile for a while with closed eyes. Since the frogs do not remain active during their sleep, they do not croak in their sleep.

How Do You Shut A Frog Up?

If you live in a waterside area, you may become irritated by frogs’ croaking. Are you searching for a foolproof plan to shut the frogs up? Then, let’s check out the following lists of making frogs quiet.

Water sources are must things for the survival of frogs. You must know that frogs can not reproduce without water. So, if you have wet areas, you may hear the regular croaking of frogs. Hence, you can dry out wet areas to stop their noises.

Click here to know more about how to keep frogs away from the pool.

Frogs tend to hide in bushy plants, piles of woods, compost heaps, potted plants, rocks, long grass, etc. If you don’t want to have frogs nearby your house, you should remove such natural shelters for frogs. Then, you will hear less of these frogs.

Frogs communicate through croaking to let other frogs know the location of foods. Reducing insect population can cause less presence of frogs and thus less croaking. However, you can use bugs repellents to deter insects.

As lights attract insects, eventually, frogs come after insects. So, if you want to shut frogs up, you should deter insects. For this, turning off lights can play a crucial role.

Making loud and harsh noise can stop the croaking of frogs. Frogs assume such noise as their danger.

According to several studies, female frogs do not croak regularly. But, male frogs croak mainly to attract the female. So, if you have pet frogs, you can shut them up by removing the males.

If you intend to keep a pet Pacman frog, you can check this article to know more about their croaking.

Another way to make frogs shut up is by removing their presence around your house. For this, you can apply homemade frog repellents to deter frogs. Such as coffee grounds, vinegar, salt, bleach, lemon juice, peppermint oil, detergent, etc.

If you want to know details to remove frogs from yards, you can go through this article to get enlightened about 15 ways.