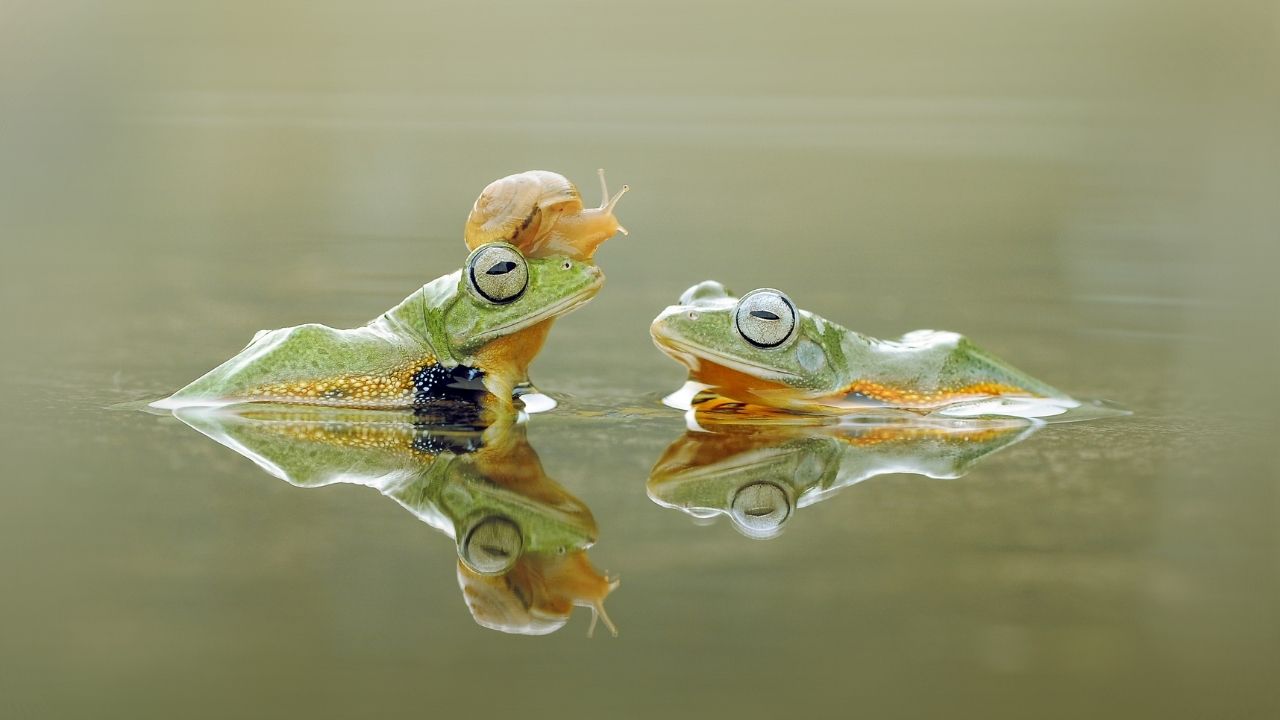 It is pretty normal to remain curious about the gender of your pet frog. Considering the croaking, temperament, and other issues, the frog owners may prioritize choosing frogs of a specific gender.

Also, you should know the gender of your frog to make them breed. Hence, the beginners often ask how to tell the gender of a frog.

Since the reproductive organs of frogs remain internal, this becomes pretty hard to tell the gender of frogs. But, there are several noticeable differences between male and female frogs in their physical appearance and behaviors.

In this article, I have explained 10 differences between male and female frogs. So, I urge you to go through this article if you are curious to determine the gender of your frog.

10 Sexual Dimorphisms To Tell The Gender Of A Frog

Since the female frogs carry eggs, they should remain heavier and bigger. It is a sign of their sound health too. The bigger a female frog gets, the more it contains eggs.

You can notice different coloration and stripes in the body of male and female frogs of a specific species. Generally, the male frogs tend to become brighter and more colorful than the females.

Also, you may notice changes in the skin coloration of male frogs during their mating season. On the other hand, the female frogs are comparatively non-attractive compared with the male frogs of similar species.

If you notice any fringe, bumps, or spikes over the skin of a frog, that frog maybe a male frog. Usually, male frogs have rough and textured skin, while female frogs have smoother skin.

In the list of common external differences, you can notice thicker and muscly arms in male frogs. Besides, male frogs develop hook-shaped structures in their hands or feet for gripping the female frogs during mating time. So, you have to search for hand or foot hooks during their breeding season to tell the gender of your frogs.

Another significant sign to tell the gender of your frog is its tympanum. The tympanum or covering of the ear of male frogs is bigger than their eyes. In the case of female frogs, these tympanum remains smaller disc as the size of their eyes.

You might notice a bubble under the neck of your frog that extends out of the frog’s body. It is the vocal sac that has a different skin coloration. Almost all male frogs have vocal sacs under their necks.

When the male frogs blow the vocal sacs with air, they can produce sounds. The vocal sac remains like loose, baggy skin the rest of the time. On the contrary, the female frog’s throats stay smooth and flat all the time.

So, you can tell the frog’s gender by noticing the loose skin even when the frog is not producing any sounds.

Do Female Frogs Have Vocal Sacs?

It’s pretty uncommon for female frogs to have vocal sacs. There are only a few species where frogs of both genders possess vocal sacs.

Though female frogs produce a sharp sound, the male frogs are more vocal. You may notice the high-pitched vocalization of frogs that are male. So, you can readily tell the frog’s gender by noticing whether they do croaking or not.

Nuptial pads are one of the most significant gender characteristics of frogs. To determine the sex or gender of your frogs, you should look at the forearm of your adult frogs during the breeding season.

A sexually matured male frogs develop nuptial pads on their arms and forearms that are the swelling breeding glands. These help them grip their female partner during mating.

On the other hand, adult female frogs do not develop any nuptial pads.

You can smoothly tell the gender of your frogs by their reproductive behavioral differences. During the mating session, the male frogs tend to hump or stay top over the female frogs. But, a female frog never humps or hugs a male frog. You will notice such behavior among only male frogs.

The last option to tell the gender of frogs is their reproductive organs. But, these are not external signs that help you know the sex of your frogs.

Female frogs have ovaries, oviducts, and uterus. In the case of male frogs, the reproductive organs are two interior testicles and the spermatic canal.

How To Tell A Tree Frogs Gender?

By checking out the physical appearances and behaviors, you can smoothly tell the gender of tree frogs.

During the breeding season, you can easily determine the gender of tree frogs by their nuptial pads. These nuptial pads get darkened before mating.

How To Tell An African Dwarf Frogs Gender?

Male and female African dwarf frogs look almost similar. Besides, there is no variation in the skin color between male and female frogs.

Sometimes, it gets pretty hard to distinguish between dwarf frogs of both genders. But, there are some noticeable differences to determine an African dwarf frog gender.

Although these frogs do not show much sexual dimorphism, you can tell the gender by the above-mentioned ways.

Each frog is unique in its way. But, their physical traits, mating signs, behaviors, etc can help you know the gender of frogs. This sexual dimorphism gets observable, especially in the breeding season. I hope you have got to know the 10 best ways to tell the gender of frogs from this article.