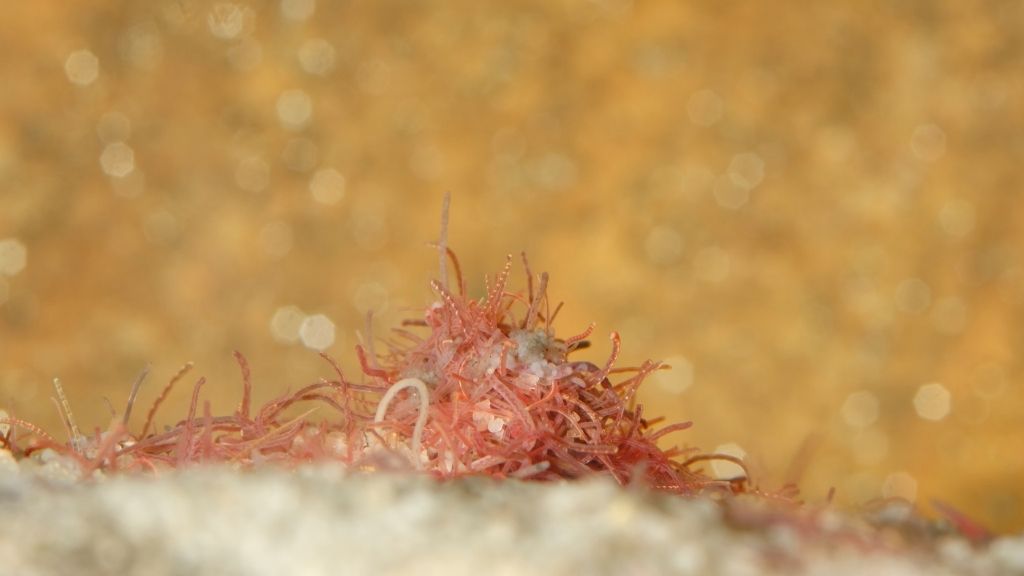 New aquarists often have a lot of quires after noticing worms in the shrimp tank for the first time. Do shrimps eat worms? Are worms harmful to shrimp? How to get rid of worms from the tank? And much more. So today, I’ve come to clear all your confusion and queries about worms in your shrimp tank.

Worms are one of the typical and healthy food for shrimps. As shrimps are omnivores, they happily eat alive, dead, frozen or even decomposing worms.

Lack of knowledge about this may have a negative impact on your shrimp as all the worms are not beneficial to the shrimp tank. Keep reading to know more about this.

Eating worms is very common in shrimps. As I told before, shrimp are omnivores. They can have both alive and dead worms and even decomposing ones.

Worms are a good source of protein, irons and minerals for shrimps. Besides, they are easy prey for shrimps.

You will find worms in almost every shrimp aquarium. They may have come to the aquarium through new plants or gravel or even with new residents of the tank.

Almost every aquatic animal eats bloodworms. Bloodworms are a great source of protein. Shrimp also consume bloodworms. It helps them to grow faster.

Shrimps literally fight over bloodworms. You can provide both alive and frozen bloodworms to your shrimp. But you shouldn’t feed them more than once a week.

Overfeeding is not a good practice. It may increase worms in the tank if there’s excessive leftovers in the bottom of the tank. Always remove the leftovers.

Bloodworms are one of the favorite foods of my red cherry shrimp.

Are Worms Harmful To Shrimps?

All the worms are not harmful to shrimps. It depends on which types of worms you have in your aquarium. Some worms that are seen in freshwater aquariums:

Detritus worms are the most common one. You will find them in almost every aquarium. They eat rotten parts of plants, leftover foods and waste materials of shrimps and fish. These are harmless for shrimps.

In fact, Detritus worms help to balance the ecosystem of your shrimp tank.

They work as natural cleaners.

But you have to be careful about its population. If there’s a small amount of Detritus worms, you won’t even see them. But if you notice a big family of Detritus worms, it’s definitely not pleasing for your aquarium. As it’s said, “Big family brings big problems too.”

The presence of large number of detritus worms is a sign of lack of proper cleaning and maintenance. This kind of environment is not suitable for shrimps or other residents of the aquarium. Thankfully there’s some simple method to get rid of them.

As they are tiny and delicate, they can come to the aquarium through different ways. New plants, gravel, fish, and even shrimps from another tank may carry worms.

Planaria worms are harmful to shrimps. Only a few of them can be fatal to your favorite shrimps. They eat shrimp and fish eggs. They often attack shrimp’s eyes and gills when they are sick or molting.

Thankfully, these are not widely seen as Detritus worms. But it’s pretty challenging to find them and get rid of them.

The easiest way to identify them is through their eyespots and extended spots throughout the body. Besides, their movement is quite noticeable as they crawl the aquarium glass.

Camallanus Worms are pink and tiny. They are not very common as Detritus worms.

They attach themselves to a fish or shrimp. Then consume blood from them.

How To Get Rid Of Worms From Shrimp Tank?

Shrimps need a healthy and safe environment for their average growth. And to ensure that you have to get rid of harmful insects or worms from the tank.

If you have noticed Planaria worms or a massive amount of Detritus worms in your tank, it is high time to take some action.

This will cut the food supply to Detritus worms. Thus their number will decrease.

I have seen some aquarists use chemicals and warm temperatures to eliminate these. But I won’t recommend that. Because these are really harmful to shrimps and other livestock in the aquarium.

These are tough to deal with. There’s no option without chemical treatment to get rid of Planaria Worms.

But before applying the method, make sure to remove shrimps and other sensitive species from the tank. Also, do some research on the product you would be using throughout the process.

Q. Should I Remove Detritus Worms From My Shrimp Tank?

But if there’s a large amount of Detritus worms, you should remove the excess worms from the shrimp tank. Because they can bother your shrimps.

Q. Why are there worms in my shrimp tank?

If you have been an aquarist for more than six months, you have surely got some worms in your tank. They can come to the tank through different ways. Introducing new plants, gravel, fish or shrimps from another tank is some of those ways.

As I told before, worms are one of the common and easy pray for shrimps. They happily eat alive, dead or even decomposing worms.

So make sure that there are no harmful worms in your shrimp tank.