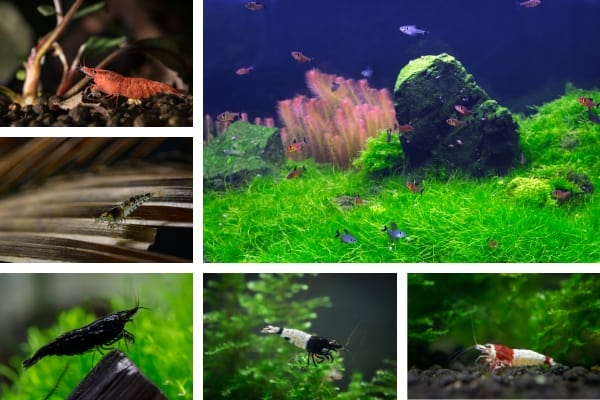 Fish keepers who want to get rid of algae often think about using shrimps. They might wonder if it is an effective solution. I was curious about this topic and after some research, I found out many interesting things that I would like to share with you.

Almost all the shrimps eat algae. Four of the most famous shrimps that eat algae rapidly without doing any damage to the plants are Amano Shrimp, Cherry Shrimp, Ghost Shrimp, and Cardinal Shrimp.

While I was doing my research I found many facts and experiments that you might find interesting. I have shared everything that I know about this topic in detail in this article.

What Kind Of Shrimp Eat Algae?

Almost all the various types of shrimps eat algae. Some are more effective than others when it comes to eating algae. I have listed some of the most popular algae eating shrimps below.

They are excellent algae eaters and they come from a species known as Sulawesi. Cardinal Shrimps can wipe out algae from your tanks easily and only 8 cardinal shrimps are enough to keep a small tank free from algae.

If you can provide them the required conditions then the Cardinal Shrimps are a good choice to keep your aquarium free from algae. They are high maintenance but also they are one of the most effective algae eaters in this list.

They are one of the most famous algae eaters. They are very effective algae eater and they can spend the whole day eating algae. As low as the introduction of ten cherry shrimp can do the trick for you. You can just sit back and watch the algae disappear rapidly from the tank. They are known for eating all the different kinds of algae.

Ghost Shrimp are very popular for eating algae. They like to eat hair algae which makes them very good for getting rid of algae. You can easily get rid of algae by releasing a few Ghost Shrimps in a small tank.

It is also known as the Japanese Algae Shrimp Eater. The body of Amano Shrimp is transparent and they might not be the most wonderful shrimp to look at but they are one of the most effective algae-eating shrimps.

They are not easy to find as the other types of shrimps but they are a very effective one to get rid of algae. They eat all types of algae and they can be termed as the worst nightmare for algae. It is believed that as low as five Amano Shrimps would be enough to control the algae of a 20-gallon tank.

If you have a large tank then ten of them would be more than sufficient for you to get rid of algae. One of the demerits of them is that you can’t rely on algae alone to keep them fed. You can feed them almost anything like simple fish flakes or even some simple blanched peas.

They are perfect for getting rid of hair algae in your aquarium. Many people reported they had seen that after adding Rudolph Shrimp in their aquarium, their whole aquarium was free of hair algae.

They are also popular hair algae eaters and do a quiet amazing job at this.

They are also known for eating hair algae. Some are reported to eat hair algae aggressively and others not so much. There are also some ghost shrimps that don’t even touch hair algae.

They are beautiful and also eat hair algae in fish tanks of up to 5 gallons.

They are probably the best type of shrimps that you can choose when it comes to removing hair algae from your tank. Make sure that you are not overfeeding them so they can keep eating hair algae in your tank.

Which One Is The Best For Getting Rid Of Algae?

I have read many articles to find the answer to this question and what I found is that Amano Shrimp does the best job of keeping your tank free from algae. But there are other many important factors that you should consider.

How Are Amano Shrimp As Tank Mates?

They are voracious eaters and not just when it comes to algae. They eat almost anything and for this reason, they are not ideal tank mates for most other types of fish.

Some of the most common fish that can live together with Amano Shrimp in peace are Cory Catfish, platies, Bamboo Shrimp, Chery shrimp, and ghost shrimp.

On the other hand, some of the worst tank mates for Amano Shrimp are Goldfish, Crayfish, lobsters, and Betta fish. These animals are aggressive and large which should not be placed in the same tank with Amano Shrimp.

Other Alternatives to Amano Shrimp

Some Tips for Taking Care of Shrimp

When you first get your shrimp make sure that you open the box carefully and collect the bag with the shrimp. You need to let it breathe fresh air.

First, you need to remove one-fourth of the water from the bag and replace it with tank water. This helps the shrimp to gradually get accustomed to water in the aquarium.

You should keep repeating the same process every 15 minutes until the whole bag is replaced with tank water. Once the shrimp is accustomed, place it directly in the aquarium.

To make sure you get the most out of your shrimps, you should not feed them much food. If you feed them other foods they might not be able to eat algae.

The best type of shrimps that you can have are medium-sized shrimps as the larger ones can eat other small fish and the smaller shrimps would be eaten by other large fishes.

Though there is not much doubt that Amano Shrimps are the most effective shrimp when it comes to eating algae but other shrimps also have their advantages especially when you want something low maintenance.