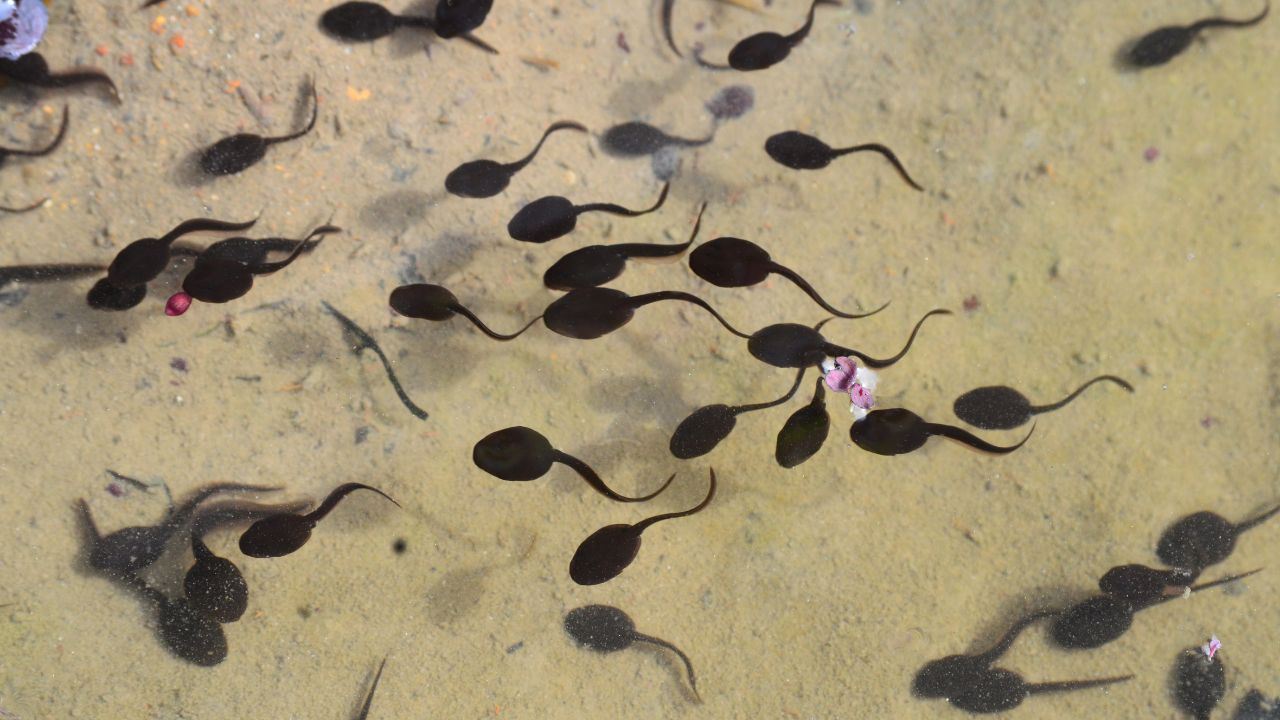 The transformation of tadpoles into adult frogs is a fascinating matter to observe. But, the tadpoles can not eat all things that an adult frog can eat smoothly. Due to having a different diet, you might wonder what tadpoles eat.

Generally, a fully-grown tadpoles are omnivores.

Since the dietary system of tadpoles is not equipped to digest meat, you should provide plant-based foods to your tadpoles. These tadpoles can eat algae, leafy vegetables, boiled vegetables, tadpole pallets, etc. When your tadpoles reach around 4 weeks, you can feed them insects, worms, flies, larvae, etc.

In this article, I’ve shed light on the diet of wild tadpoles and tadpoles in captivity, the amount of feeding, what not to feed, and other additional information. If you want to know what tadpoles eat, you should not miss this article.

What Are Tadpoles In The Wild Eat?

In the wild, the tadpoles tend to eat anything they find. These tadpoles do not become picky at choosing foods as they need to survive in the wild at any cost.

At the very beginning, tadpoles finish the remaining of their unhatched eggs. In the wild, the tadpoles are generally algae eaters. Since they stick to one certain area in the wild, they tend to gobble the surrounding moss, algae, and biofilm of that place.

Tadpoles remain herbivores at the initial stage of their life. So, you’ll see them sticking with a plant-based diet in the wild. Gradually, these tadpoles switch to larger plants.

After 6 weeks, these tadpoles start targeting the micro-preys. The older tadpoles can eat the fallen reeds and seeds.

I’ve made a small list of foods that tadpoles eat in the wild. Let’s check the following list.

What To Feed Tadpoles In Captivity?

Up to 6 weeks, the tadpoles tend to remain herbivores. Gradually, these tadpoles become omnivores. In the wild, they tend to eat anything which they find around them. Since tadpoles do not have all food sources in captivity, you should provide safe food.

Let’s see the following list of safe foods that you can feed tadpoles in captivity.

What Do Tadpoles Eat In A Pond?

The aquatic life of tadpoles in the ponds oscillates between escaping from predators and searching for food. The primary food for tadpoles is the algae and aquatic vegetation of the ponds.

Along with algae, tadpoles devour the organic matter that is floating in the pond. Generally, tadpoles depend on the algae and mosquito larvae of the pond.

The Feeding Guide Of Tadpoles According To Their Growth

When the fertilized eggs get hatched, the tadpoles emerge in the water. In the initial state, these newly emerged tadpoles do not remain much active. These new tadpoles tend to survive on the remaining yolk of their eggs.

After consuming the remaining yolks, the tadpoles look for soft foods that they can readily munch. The tadpoles depend on plant materials until they grow hind legs. However, the transformation of tadpoles depends on the species of frogs, the temperature of the water, etc.

I’ve prepared a chart in which you can find the diet of tadpoles according to their growth and age. Let’s check this out.

How Often Should I Feed Tadpoles?

Tadpoles require large amounts of feeding than adult frogs. You might wonder to see your tadpoles becoming adult frogs within a few weeks. Since their growth is fast, you should provide food matching their appetite.

The amount of feeding is not readily determinable. You can check the content of uneaten foods with your tadpoles. According to the content of leftovers, you can reduce the share of foods.

But, you should adjust the quantity and amount of feeding depending on the age and species of the tadpoles.

Baby spinach is good for tadpoles, filled with potassium, folate, protein, calcium, iron, and vitamin A. Firstly, you should wash the spinach leaves thoroughly so that there remain no parasites.

Afterward, you can chop the spinach and let them float on the tank of tadpoles. Otherwise, you can also boil the spinach. The boiled spinach will get softer to bite for the tadpoles.

Generally, tadpoles do not eat any insects that are not moving. So, tadpoles will not eat dead bugs if they are not starving. It happens not only in the wild but also in captivity.

Can I Feed Tadpoles Banana?

Bananas are good for the overall development of tadpoles. If you have tadpoles in captivity, you can feed your tadpoles bananas daily.

Moreover, It’ll be a good source of fiber, minerals, potassium, and vitamin A. If your tadpoles get injured, bananas will help recover the wound fast. Make sure to feed only ripe bananas to your tadpoles.

Another safe option for vegetables is cucumber for your tadpoles. Your tadpoles can digest cucumbers. But, firstly, you should prepare the cucumber to make it readily biteable to tadpoles.

Do not forget to remove the seeds of the cucumber. If possible, you can blench the cucumber for your tadpoles.

Lettuce is a good source of protein and calcium for your tadpoles. But, fresh raw lettuces are too hard to swallow for tadpoles. These lettuces require a bit of preparation so that your tadpoles can eat these leaves.

Before preparing lettuce for your tadpoles, you should wash the leaves properly. You can boil lettuce so that your tadpoles can readily munch the boiled lettuce.

However, you should avoid romaine lettuce and iceberg lettuce. That’s because this lettuce has low levels of minerals and nutrients.

The answer is no. Tadpoles can not eat raw carrots since these raw carrots remain too hard for tadpoles. Hence, you need to chop the carrots into pieces.

Afterward, you should boil the carrots, and blench them a bit. If you want to make it tastier, you can a bit of spice. These are good sources of fiber, vitamin A, beta-carotene, etc.

Can I Feed Tadpoles Fish Food?

When your tadpoles grow a bit older, they start eating a meat-based diet. Your tadpoles can eat fish food.

What Should You Not Feed Tadpoles?

You should not feed processed human foods to your tadpoles. Such as bread, processed meats, baked goods, etc. These foods put negative health effects on tadpoles.

2. Commercial Pet Food For Other Animals

You should avoid feeding starchy vegetables to your tadpoles. For example potato, squash, corn, turnips, etc. These vegetables have high carbs and low calories. You should choose such vegetables that hold many nutritious values.

You should avoid sugary fruits as much as possible in the list of tadpole diets. If you want to feed sugary fruits to your tadpoles, you can provide only a little piece of fruit occasionally.

Although tadpoles become carnivores gradually, wild-caught insects are risky for their health. These can bring diseases to your tadpoles.