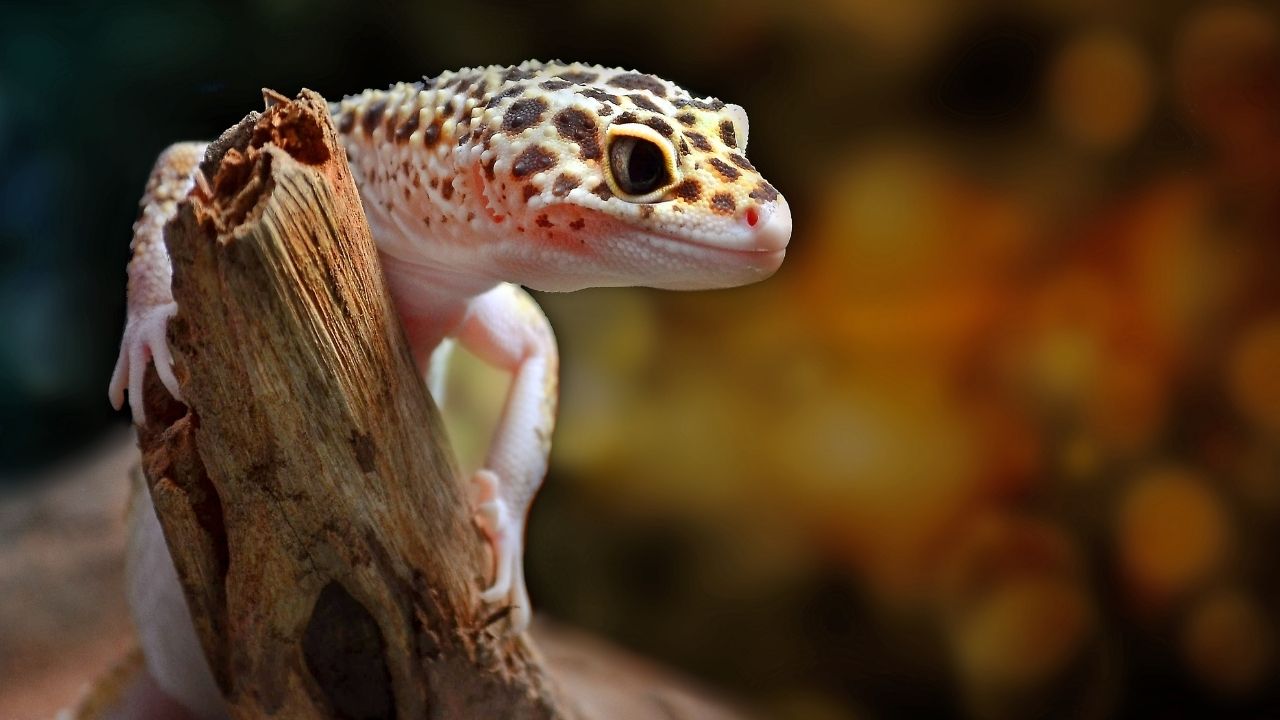 When you own a Leopard Gecko, the first thing you want to do is to interact with your pet. Leopard Geckos are generally active reptiles and they make certain movements to show their emotions. As an owner, you must know the body language of your Leopard Gecko to understand it better.

There are almost 10 body languages of Leopard Geckos such as tail waving and rattling, glass surfing, staring at owners, biting tails, hiding, making squeaking noises, and more. These certain body languages are very common behaviors that they show when they are either happy, sad, angry, unwell, or uncomfortable.

If you are interested in knowing more about the body language of your Leopard Gecko, stick with us till the end.

Leopard Geckos are solitary in nature, which means they like to live alone. Hence while living alone, they show some body languages which are different and unique. These includes:

Head shaking is a common thing in Leopard Geckos, especially when they eat.

When the insects are large in size, your Leopard Gecko shakes or sways its head while eating those insects. This helps your Gecko to pass the food via its throat easily.

Sometimes if the food is stuck in Gecko’s throat, it can shake its head to make the food pass easily.

If you see your Leopard Gecko moving its throat fast it could be either for breathing or swallowing foods.

When a Leopard gecko eats food, its throat moves fast just like normal humans. However, in the case of big insects, it can also be a sign of distress.

Leopard geckos can’t breathe like normal human beings as they do not have diaphragms like mammals. This is why they gulp fast to breathe air in and out.

Tail wagging is a part of Leopard Gecko’s communication.

If there are two Leopard Geckos present in the same tank, they might communicate wagging their tails.

Tail wagging can also be a sign of defensiveness or excitement. But the pace of wagging indicates different intentions.

When a Leopard gecko moves its tail slowly, this generally means that it is becoming defensive or showing its presence to other creatures.

While wagging tails slowly, Leopard Geckos can also lower their body down to the ground. This indicates that they are still observing other Geckos or creatures in front of them.

When a Leopard Gecko wants to show its presence to other female Leopard Geckos, it might move the tail fast in front of those female Geckos.

The excitement tail wagging is different from other waggings that a Leopard gecko does.

The excitement tail wagging is more common in younger Geckos rather than the adult ones. Adult Geckos do the same on different occasions.

When there is any insect or food present, your Gecko might excitedly move its tails as well.

When excited, any Leopard Gecko starts wagging its tail slowly at first, and then when it sees any insect, it starts wagging the tail fast before eating the insects.

When a Leopard Gecko is in defensive mode, it starts wagging its tail either slowly or fastly at a pace.

The Geckos do it either to distract their enemies or when they are unsure about another Gecko / their owner.

When a female Gecko is present in the same tank, your Leopard Gecko might wag its tails in a very fast motion. This helps your Gecko to show its presence in front of the female Gecko.

You might find your Leopard Gecko hiding in their tank for various reasons, which include:

In a new environment, your Leopard gecko tends to hide a lot. This hiding is normal as it tries to adjust to its surroundings.

Geckos also look for predators inside their hiding spots. They try to listen to sounds or any vibrations to make sudden attacks.

When your Leopard Gecko is sad, it tends to hide in its hiding spots.

As Leopard Geckos like to stay alone, they prefer to hide instead of interacting with their owners.

You can try to cheer them up in various ways or leave them alone until they become comfortable again.

If the light in the tank setup is too bright, your Gecko might not be able to take it as the Geckos are sensitive to it.

Hence your Gecko might stay inside its hiding spot rather than come out to play around.

If your Leopard Gecko is new or has seen something different in its tank, it might get scared.

As an unsocial reptile, Leopard Gecko loves to stay alone. Hence if the Geckos see some alive insects or do not get used to being around you or others, they might spend time alone to understand their surroundings.

In such cases, they would like to be inside their hiding spot until they feel comfortable.

Shedding is a very uncomfortable yet common phenomenon in all reptiles. As a part of this process, your Leopard Gecko might prefer staying in a moist hiding space as this process needs more humidity.

When hungry, your Leopard Gecko might eat a lot to gain energy and relieve its hungriness.

Young Leopard Gecko might eat a lot as a part of its diet and growing process. But you must ensure that it does not overeat.

When the tank setup is dirty or too simple, your Leopard Gecko might stay inside its hiding spot to hang out alone.

Inside a dirty tank, your Leopard Gecko will obviously not feel comfortable. Consequently, your Gecko might become lazy as well.

If there are fewer objects to explore, that also can make your Gecko stay inside their hiding spot.

You may sometimes hear high-pitched sounds of Leopard Geckos, which is again a part of their defense mechanism.

When your Leopard Gecko feels threatened/ uncomfortable, it might start producing this sound until it distracts its predators.

When your Leopard Gecko flicks its tongue out, it basically tries to sense the environment using the Jacobson’s gland present in that organ.

Your Leopard Gecko may stare at you for a long period. This is very natural as it might be attracted to you or because it is hungry and needs food.

Leopard Geckos are very much attracted to movements and whenever you make a move while handling them, they might stare at you.

If your Leopard Gecko is hungry and it knows who will be bringing food, it might also stare at that person for wanting food.

Soaking is a part of the shedding process in Leopard Geckos. When your Leopard Gecko is shedding, it needs humidity and soaking helps it to ease this process.

Sometimes your Geckos might do the soaking often due to their problems while shedding skin.

You may see your Leopard Geckos biting each other’s tails when they are newly introduced to each other. This is a defense mechanism of Geckos which they use to show their dominance.

The biting of tails can further lead to injury. Hence, it’s better to keep Leopard Geckos in separate tanks rather than disrupting their privacy.

You may find your Leopard Gecko climbing the tank walls. This can happen when:

How Do I Know If My Leopard Gecko Is Happy?

Even if the Leopard Geckos cannot speak, they can show their emotions through their actions. If your Leopard Gecko is happy, it might show some movements which include:

When Leopard Geckos are happy in nature, they tend to be more active and energetic. They will explore the tank more, move here and there, and will be playing around all day long.

Your Leopard will look brighter and alert and they will also react to your movements.

They might also come running to the wall of the tank when they see you.

Handling Leopard Gecko is a task until they become comfortable with you. Once it starts becoming comfortable, it will also become happy with your existence.

Geckos might love the warmth of your hand and might lick you to show their affection towards you.

They will neither show any sluggishness nor hiss at you while being handled.

They might rub their face in the palm of their hands to show their love.

A happy Leopard Gecko will always have smooth movements as it tends to be relaxed or unafraid of anything.

When your Leopard Gecko is happy, it will become more active and sleepier as time passes. It will not sleep less or more than usual.

A healthy and happy Leopard Gecko will have the optimum amount of food. If your Gecko is unhappy, it might not come to eat food or show disinterest in having those.

How Do Leopard Geckos Show Affection?

Leopard Geckos might show their affection by licking you, enjoying your company, or looking out for you more.

When you handle a Leopard Gecko, you need to look for its body movements. If they like you, it might lick you or try to be with you instead of running away or hissing at you.

The Geckos will try to rub their skin on your palm slowly and will look out for you whenever you are not beside or around them.

What Are The Leopard Gecko Defensive Postures?

A Leopard Gecko might wave their tails slowly, stand straight, or hiss at its predators to defend itself in a crucial situation.

Wagging tails fast or slowly helps a Leopard Gecko to distract their enemies and they can run away from that place easily.

When you see your Leopard Gecko stand straight, this is another defensive technique to scare the predator away. As this is an unusual movement and any predator will be shocked by this sudden movement.

What Does It Mean When A Leopard Gecko Stands Tall?

Sometimes you might see your Leopard Gecko standing straight with its tight legs and arched back. The Geckos do this when they become terrified or enter defensive mode.

A Leopard Gecko does this sudden movement to scare its enemy off.

Sometimes the Geckos may also stand tall when they need food or they are hungry.