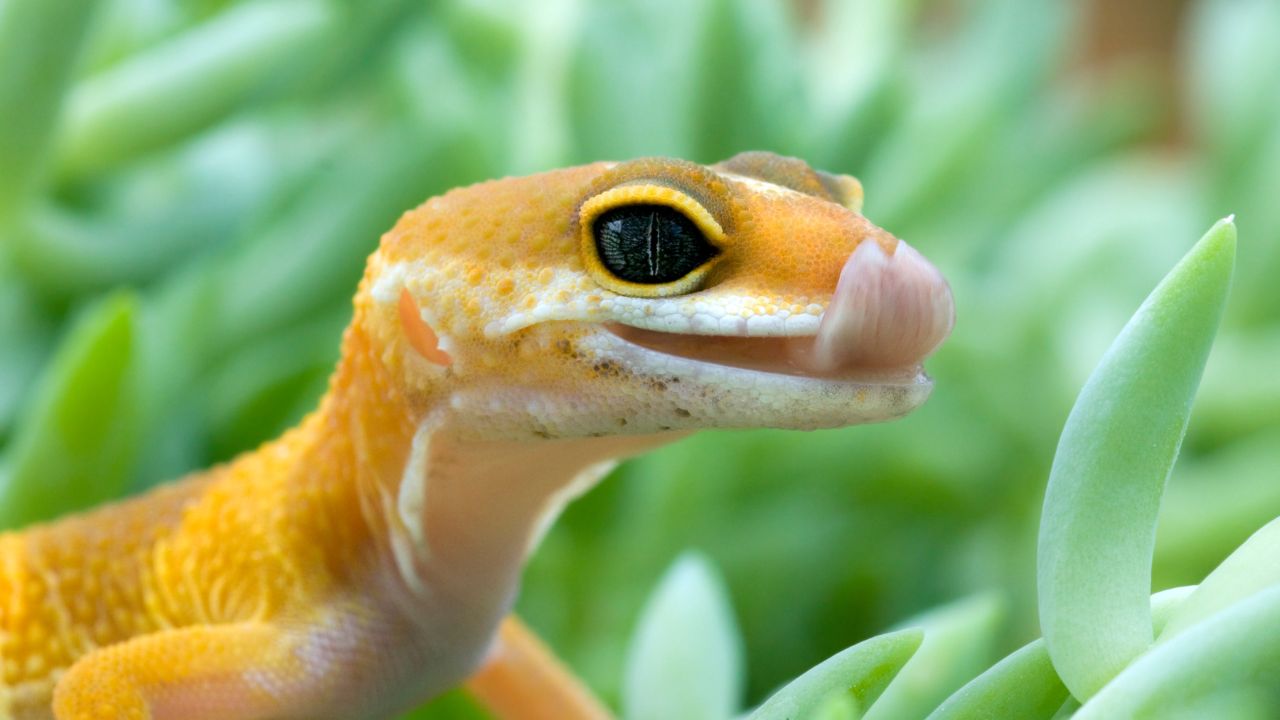 If you pet a Leopard gecko, you might see them licking you now and then. Even if this is a common phenomenon, you might be surprised to see this action happening repeatedly. Hence a question might arise in your mind- what does it mean when Leopard Gecko licks you?

The licking of a Leopard Gecko means it is trying to smell or taste the environment using its Jacobson’s Organ inside its mouth. This also means that they are trying to understand you better. However, if they lick your hand or arm, it indicates that they want you to handle and take care of them.

If you want to know more about this interesting behavior of your Leopard Gecko, you should stick till the end.

Why Does a Leopard Gecko Licks You?

Leopard Gecko licking you is not an unnatural behavior. As mentioned, Gecko uses their Jacobson’s organ to sense the environment via their tongue. But there are a few other reasons why they might lick you:

Curiosity about the surrounding

Leopard Geckos are very attracted to different movements in the environment. If they observe any changes in their surroundings or in you, this catches their attention, and they tend to lick you to understand the modification.

If your Leopard Gecko is thirsty, it will try to lick you or other wet objects to quench its thirst. Hence if you have sweaty or damp hands, you might find your Gecko licking it and try to ensure that they no longer remain thirsty. Otherwise, it can cause dehydration.

Most Geckos lick their owners to reassure themselves that they are in safe hands. It’s just a way of them showing their trust towards you.

Why Does A Leopard Gecko Lick Other Objects?

Apart from licking you, you might find your Leopard Gecko licking other objects in their tank. This is also a natural phenomenon, and this act mainly occurs due to curiosity. But there are a few different reasons behind it:

If there is any other object present in front of your Leopard Gecko, they would first lick it to determine if it’s safe or not. Depending on whether the object is harmful or harmless, your Leopard Gecko may go along with its activity or hide in its hiding places.

If your Leopard Gecko is hungry, it will tend to lick its surrounding objects to see if those are its food or not. Their tongue has a special “Jacobson’s organ,” and they can smell the object to find food for themselves.

When your Leopard Gecko is thirsty, it will lick not only you but also its surroundings. This is a part of their natural behaviors. They do not find water easily in their natural habitat. So they have the habit of licking different objects to find water.

Why Do Geckos Lick Their Eyes?

Leopard Gecko licks their eyes simply to clean any dirt or debris formed in the eye and also to keep it moistened. Leopard Geckos do not have movable eyelids; hence they cannot protect their eyes by blinking or closing. That is why they use their tongue to clear the debris.

Gecko’s eyes also do not produce tears, for which moistening is done via their licking activity.

Why Do Geckos Lick Their Mouth?

After feeding your Leopard Gecko, you may see it licking its mouth. This happens when they try to lick off the remaining foods or cannot hold foods for longer. Licking off food is very normal, but if they can’t hold food, it can cause a weak jaw or metabolic bone disease(MBD).

MBD or metabolic bone disease results in soft and spongy jaws that can be examined carefully using your fingers. If you feel the presence of rubbery bones or spongy jaw, consult a reptile vet as soon as possible.

Why Do Geckos Lick Their Nose?

Leopard Geckos might lick their nose to get rid of sheds or small scabs gained from cricket’s bites in that area. If your Geckos nose has stuck shed, they will try to remove it by rubbing their nose on a hard surface, resulting in a sore nose.

Why Do Geckos Lick Their Vents?

Leopard Gecko licks their vents to clean themselves and eliminate any smells. This is a very common habit that you might often see them doing. But there are some reasons behind cleaning their vents, and they show certain licking behaviors, which include:

Leopard geckos are territorial creatures. They mark their territory by secreting waxy material from pre-anal pores near the vent.

This waxy material also works as an indication for mating with their partners.

Later they clean up the secretion by licking it. This licking also helps in preventing clogged pores and thus reduces the chance of further infections.

Leopard Geckos clean their stool or waste material produced from their body by licking them. Sometimes, they clean themselves even if they aren’t defecating, which is a part of their hygiene maintenance.

After the mating procedure is completed, leopard Geckos clean their vents to clean up everything around that area.

You may see your Leopard Gecko licking itself after shedding. They do it to ensure the removal of all old skins and decrease the discomfort after the shedding procedure.

Female Geckos seem to clean their vents after laying eggs to avoid discomfort related to this procedure.

To ease the passing of stool via the vent area, your Leopard Gecko might lick it to make the area more lubricant in nature. Thus the stool can move easily via the vent.

Also, during impaction, the Gecko’s vent gets swelled up, and they lick the vent area to soothe the discomfort and clear the area.

Some Geckos lick their infected areas caused by parasites/ infections to reduce the discomfort. Hence you must check their activities and consult a vet according to the situation.

What Does It Mean When A Leopard Gecko Licks Its Lips?

Leopard Gecko licks its own lips before shedding or to sense the environment better. Lip licking of Leopard gecko also indicates mouth rot( infection or abscesses present in the mouth). This can also lead to early metabolic bone disease.

These diseases cause a lot of pain. If you see your Gecko licking its lips often, try to inspect the issue and consult a veterinarian.

What Does It Mean When A Leopard Gecko Winks At You?

When a Leopard gecko is suddenly exposed to excessive light in the tank, it tends to blink or squint for a few seconds. If the source of light in the tank is not positioned correctly or one part of the tank gets too much light, the vision of your Gecko might get hampered.

In this case, you need to set up the light’s position and ensure that the whole tank gets the same amount of light in all places.

Shedding is a natural yet uncomfortable procedure for any reptile. So when your Gecko goes through this process, they tend to make them wink and sometimes lead to complete blindness.

To help your Leopard Gecko shedding, you must ensure optimum temperature and humidity inside the tank.

Leopard Geckos mostly spend their time on substrates inside the tank, so suitable quality substrates are required. The Zoo Med Eco Earth Substrate is one of the best substrates that provides natural terrarium setups and can break down waste material easily.

A wrong substrate solution can result in not only blinking but also affect your Gecko’s health badly. So changing your substrate to a better one will not bother your Gecko, and they won’t often blink either.

If your Leopard Gecko gets some injury from their environment, they can often blink to make you understand their issues. Hence after inspecting such acts, make sure to take it to any vet as soon as possible.

Why Does My Leopard Gecko Stare At Me?

If you observe your Leopard Gecko staring at you, it can be because they’re also observing your movements to detect any threats. As they are from an environment where they mostly meet predators, this staring is basically a part of their survival instinct. It is very normal.

There are, however, some other reasons why your Leopard Gecko might stare at you:

Similar to humans, Leopard Geckos tend to be curious when anything moves around them. The moving objects around their eyesight increase their curiosity and tend to make them stare at it for a long time.

This is absolutely normal behavior of a Leopard as they tend to understand the movements and look for food sources by observing the patterns of the surroundings.

When your Gecko is hungry, it might stare at you if they know that you are its food provider. As it has no language of its own, it will tend to show its hungriness to you by looking at you until you provide the food source. Check How to know if your Leopard Gecko is hungry?

Also, when you come with the food, they may stare at you as they know that you will provide food to them.

Generally, Leopard Geckos tend to live alone and do not prefer cohabitation. Hence if there is a presence of another Leopard Gecko in the same tank, it will tend to be more cautious and observe their movements.

Leopard Gecko licking their owner is a common phenomenon, and they tend to do it for different reasons. You may also find your Gecko licking the environment and itself, and there are some important reasons behind it.

If you find your Leopard Gecko licking you or other objects excessively, you may need to consult a reptile vet as soon as possible.

This is how you can create a great bond with your Leopard Gecko and help them grow and survive with you.