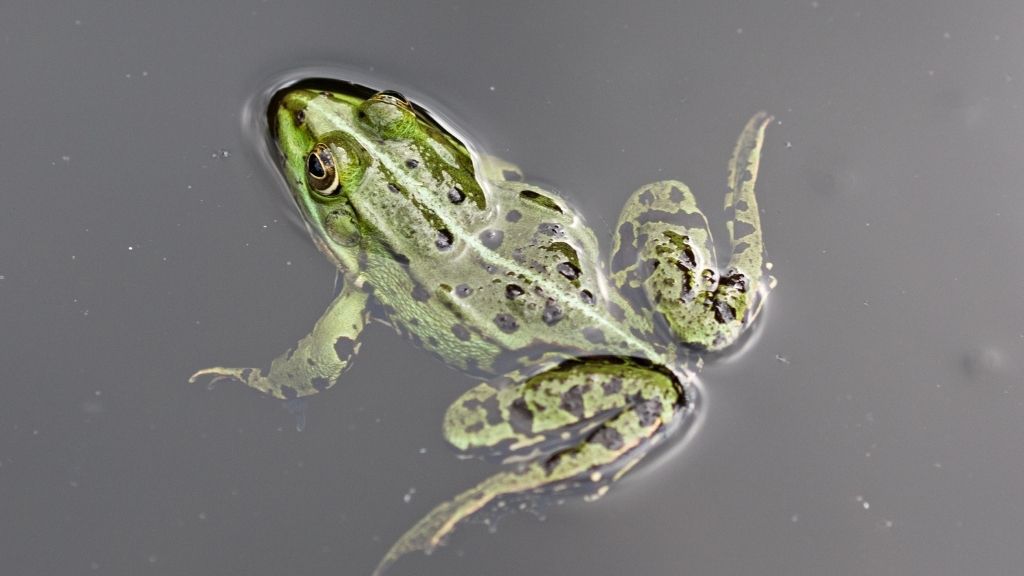 Frog keepers often get confused about whether they should put their tree frogs in aquatic environments or not. There are a lot of myths spread on the internet saying tree frogs can’t swim or they drown in water and die. Is it actually true?

Tree frogs can swim. Even though they don’t prefer living in aquatic environments and their life-cycle is mostly independent of this sort of environment, they can still swim.

So before making an additional water tank for your tree frogs, let’s dig in to know what they prefer and how much they prefer living in the water.

The Myth And The Reality

But the reality is quite different. Tree frogs do not inhabit aquatic environments. But they definitely can swim. They possess all the physical attributes necessary for swimming. But they do not rely much on water and do not prefer to live in water. That’s the reason most tree frogs never swim after growing up.

Difference Between A Tree Frog And A Pond Frog

Tree Frogs do not rely on water that much contrasting with their aquatic counterparts. Some specific differences in skin, reproduction, physical structures, and hibernation separate these two kinds of frogs.

How Do Tree Frogs Stay Hydrated?

Tree frogs are quite different from pond-dwelling frogs in this case. Almost all kinds of frogs maintain their moisture through their skin. They adapt to different environments by using their special ability to form a layer over their epidermis and by changing permeability.

Pond-dwelling aquatic frogs always stay in close contact with water. So it’s much easier for them to stay hydrated. Whenever they need to hydrate themselves, they take a dip into the water.

To prevent the loss of water, they secret mucus-like substances from the mucus secreting glands of their skin. This layer of mucus helps them to retain water within the body. It’s an ecological adaptation of frogs in dry conditions.

But tree frogs usually do not come to contact with water frequently. So it’s much harder for them to stay hydrated. They usually absorb moisture from leaves and soil. Tree frogs are mainly found in tropical rainforests. So water retention is one fundamental thing they need to maintain.

Tree frogs have some wax-secreting glands on their skin. It develops an extra layer to help prevent additional water loss. But most of the tree frog species do not need to generate this layer as the environment is always so humid and moist around them.

No, tree frogs cannot swim as pond frogs do. It’s because of their differences in physical attributes. Pond frogs and Tree frogs are designed differently for coping with their respective environments.

Pond frogs have special anatomical traits that allow them to swim and hop smoothly. They have stronger and bigger back legs. The anterior limbs are generally smaller. These limbs are used for navigation during swimming and swift landing. The feet generally spread to help propel the frog in water.

But tree frogs possess different anatomical development of their limbs. Their front and back limbs are almost even. They have sticky pads in their toes that help them to climb and stick to the tree surfaces. It also allows them to leap from branches to branches and land more efficiently.

Because of the differences in their physique, tree frogs cannot swim as the way pond frogs do. They swim slowly and do not maintain direction as well as pond frogs can. So it may be their physical attributes that do not motivate them to go and take a refreshing bath.

Here’s the most important point. Evert frog species need to lay their eggs in an underwater environment. Also, the development of tadpoles after hatching is dependent on aquatic settings.

Pond frogs do not face any problem while mating and laying eggs as they remain in close contact with water reservoirs. The female frogs lay their eggs underwater either below plants or attaching to other underwater structures. The tadpoles grow up to adulthood in the pond where they hatched.

But things are different in arboreal frogs’ reproduction procedure. They need to come up with creative ideas to provide their offspring with an aquatic environment. For the survival of tadpoles, an aquatic setting is a must.

Tree Frogs make their nest on tree branches hanging over ponds. The eggs are released from the nest to get access to water. Some tree frogs carry their eggs in pouches on their backs. They even carry their eggs in their throats and release them in water until they are ready to hatch into tadpoles.

How Do Tree Frogs Breathe Underwater?

Like other frog species, tree frogs possess the same anatomical and physiological respiratory functions. This system differs in two different stages of their life.

Adult tree frogs develop well-structured lungs. They lose their gills while growing up. These well-developed lungs help them to breathe with ease. They control their breathing with throat and nostrils.

Like every other frog species, tree frogs possess a trait called ‘Bimodal Breathing’. Bimodal breathing comprises skin respiration and lung respiration. In aquatic environments, tree frogs use their skin to breathe. So there’s no way tree frogs will not be able to breathe underwater. It kills all the myths spread on the internet.

The Dos And Don’ts In A Tree Frog Terrarium

As tree frogs do not prefer living in aquatic settings, you do not need to bring an additional water pool for your frogs. Many frog owners make this mistake. They make artificial ponds and water streams for their tree frogs. DON’T.

Put 2 or 3 inches of coconut fiber or tree bark bedding to line the bottom of the tank. I love Zoo Med Eco Earth Coconut Fiber as the substrate for my frog terrarium. This substrate can hold moisture and is the industry popular choice for reptiles & amphibians.

You can also provide more and more live trees and artificial tree branches to allow your tree frog to hide and show some acrobatic moves. Here are my favorite decorations for a frog vivarium:

Take a small bowl and put in some dechlorinated water. Place the bowl in the middle of the terrarium. It will allow your frogs to stay hydrated and drink water. I usually prefer Zoo Med Food & Water Bowl because they are safe for animal and also looks very naturalistic.

If you want to see your tree frogs swimming, you may add a bigger bowl which can be almost half the size of the tank. It’ll also be beneficial for tree frog pairs to breed.

The widespread myths about tree frogs’ ability to swim may prove to be a big concern for tree frog owners. Similarly, putting tree frogs in artificial ponds will lead to some damage. So it’s important for anyone having a tree frog to know the reality.

Tree frogs should be kept in settings that are favorable for their existence. But it’s never a bad option to put a water bowl in the terrarium. Who knows, you may get to see some breaststroke swimming from your tree frogs.