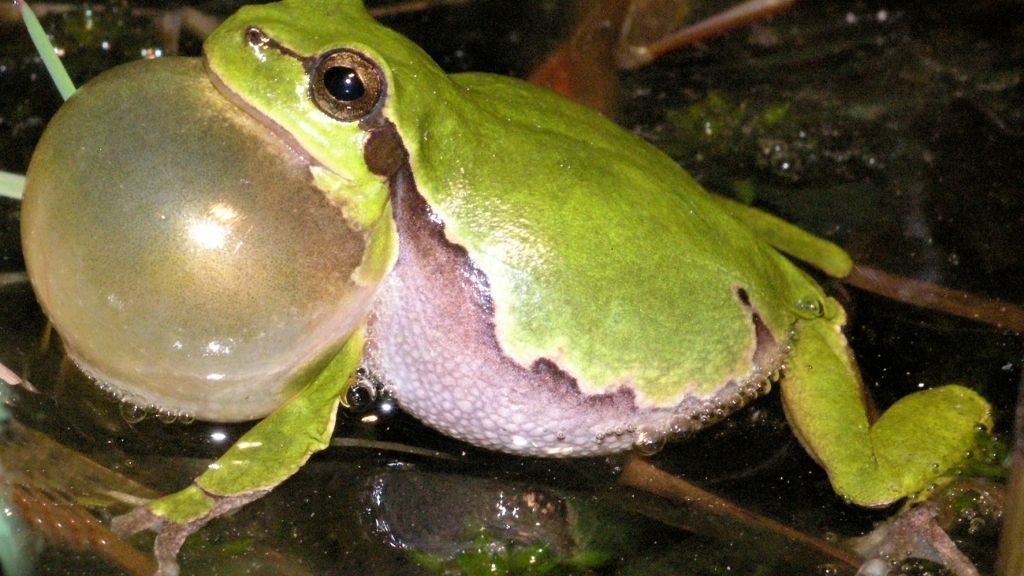 Tree Frogs are widely chosen as a pet for their beautiful appearance and harmless instincts. But there is something tree frog owners often complain about, CROAKING. If you are a tree frog owner, it’s pretty sure that you have come across croaking at least several times.

The main reason for Tree frog croaking is to seek attention from their female mates. Other reasons include rainfall, extrinsic stimulation of mating, establishing territory, food, etc.

So before placing your frog tank anywhere near your bedroom, make sure you’re aware of this potential disturbance. Read this article below to know more about frog croaking.

Croaking can be defined as frog barking. It doesn’t mean any specific kind of sound, but a whole range of different types of sounds. They can be either High pitched, low pitched.

Frogs do not only croak but also chirp, snore, can mimic cat sounds. But it’s important to know that only male frogs can croak. Female frogs usually scream, which sounds different from croaking. They also tap their limbs to create a sound more like a clap.

Croaking also differs from species to species. Even different kinds of tree frogs croak differently from each other. So croaking is also an indication of their species. It also helps frog owners to understand which type of frog they are actually buying.

How Do Tree Frogs Croak?

Just like us humans, frogs have a vocal cord. This vocal cord produces this special sound. First, they inhale air through their nostrils. The air flows through the respiratory tract and reaches the vocal cord through the Larynx.

Then the vocal cord creates the sound. Initially, the sound is not so high-pitched and cannot travel a long distance. This is where throat pouches play an important role. When the sound reaches the pouches, the frog closes its nostrils and amplifies the sound within the pouch by expanding.

Why Do Tree Frogs Croak?

There are some reasons why frogs croak. Here is a list of factors that stimulate a frog to croak:

Tree frogs are mainly found croaking during mating season. Their mating season is mainly summer and spring, especially after a springtime rain. Their reproductive stimulations are closely associated with rain.

Male frogs start croaking to attract female frogs. This appeal can differ from species to species. Tree frogs croak in a way that will only attract mates of the same species. Otherwise, it’ll be a waste of effort.

The croaking sound is not always the same, they sometimes croak with a deeper voice, sometimes try different tones. It’s more like singing and attracting their female mates.

Ecologist Dr. Graeme Gillespie said, “They surely croak to attract female mates. This process is pretty instinctive. They’ve got some chemical cues in their body to respond to various stimuli.”

But when the temperature gets colder they tend to hide in their captivities. This sort of environment does not allow reproductive activities in frogs.

Why Do Tree Frogs Croak During Night?

Tree fogs tend to croak during the nights. It’s a safer option because they can avoid visible predators at night. Besides, sounds can reach a long distance at night without getting overlapped.

But some frog species also croak in the daytime. They are mostly poisonous and are not afraid of predators.

Tree frog keepers are mostly annoyed during nighttime when their favorite pet starts to croak out of nowhere. Frogs kept in captivity croak for many reasons. They can be either extrinsic stimulations or intrinsic factors.

Many frog keepers create artificial stimulations because this is the only way to encourage tree frogs to breed. They use the sound of vacuum cleaners, blow dryers, thunderstorms, and rainfall.

During mating seasons male frogs kept in tanks croak to attract female mates if you haven’t put any in the tank already. So it’s important to put tree frogs in pairs if you want your tree frog to croak less. Sometimes putting frogs in pairs will not help.

Other reasons can include hunger and an unfavorable tank environment. If you do not provide a suitable environment inside the tank, your tree frog is most likely to protest against it.

Sometimes you may hear many male tree frogs croaking together in your tank. There can be two reasons for it, but those two reasons connect at one same conclusion, Dominance.

Male frogs build and maintain their dominance over other members of that area by creating louder croaks. The one that croaks the loudest happens to be the leader of that group. They can also get competitive to attract female mates.

How Do Tree Frogs Hear Croaks?

Frogs don’t have ears like humans. They have an eardrum and an inner ear. The eardrum is placed on both sides of the head and protects the inner ear. This shield is called the Tympanic membrane or Tympanum.

There is a bone attached to this membrane. When a sound hits the membrane, it also hits the bone. The vibration goes down to the semicircular canals, cochlea, and papilla. This eardrum works both above and underwater.

Here’s an interesting fact about tree frogs. The distance between their eardrums is very narrow. And that is why frogs cannot hear high-pitched sounds. They can only hear lower frequencies.

Is Croaking Harmful For Frogs?

Croaking requires too much effort and causes a lot of stress. Research has found out that a tree frog has to use almost 15% of its total body energy per croak. Excessive croaking while attracting female mates may have abrupt effects.

Sometimes they become too tired that they lose the energy to continue the process. So if you notice excessive croaking you should try to find out the reasons.

How Often Do Tree Frogs Croak?

There is no specific data on this. It differs from frog to frog. During mating season, a tree frog croaks twice a day on average. The croak can last for some seconds to a minute. As they croak loudly during bedtime, it can prove to be so disturbing for the owners.

How To Stop Croaking?

Croaking is a natural method to express their interest towards the opposite gender. It’s also important for the reproduction of frogs. So it is never possible to stop tree frogs from croaking.

But if it croaks excessively, try to find out the reason. Sometimes bringing a female mate will solve the problem. Try changing the female frog if the male frog still croaks.

Make sure you are feeding your frogs regularly. Keep the environment inside the tank moist.

Croaking may seem like an annoying thing to someone reading this who hasn’t bought a tree frog yet. But for tree frog owners, it becomes a habit. So try to keep your frog tank a bit distant from your bedroom. And if it still annoys you, go for a female tree frog instead.