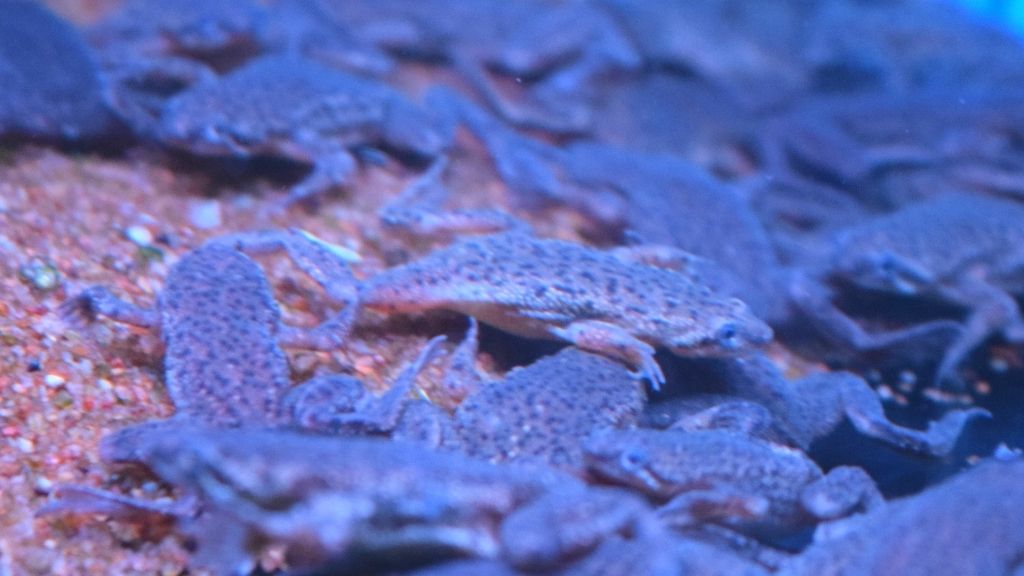 Before looking for the signs of pregnancy, you should affirm that your frog is female. A pregnant African dwarf frog will have a swollen belly filled with eggs. Besides, there remain several behavioral changes in a gravid African dwarf frog. Such as less eating, orientating towards the mating calls, etc.

In this article, I’ve summed up 3 signs of a pregnant African dwarf frog. If you own a dwarf frog, you should be aware of these identification signs of pregnancy.

The duration of pregnancy of African dwarf frogs varies according to the tank environment, water parameters, and other environmental conditions. Their mating can take a few hours.

Generally, these African dwarf frogs remain pregnant for 2-3 weeks, depending on the water condition of the tank.

When the gravid African dwarf frogs lay eggs, these eggs will be ready for fertilization. After getting fertilized, the eggs will get hatched within 48 hours to a week. Afterward, the hatched eggs will turn into tadpoles.

If you’re a beginner, this article will help you know about African dwarf frog egg and baby care.

How To Tell If My African Dwarf Frogs Are Pregnant: 3 Signs

The first sign to detect the pregnancy of your dwarf frog is its size. Since African dwarf frogs aren’t live bearers, we can’t call them pregnant. This phase is known as their gravid condition.

So, containing this large amount of eggs makes African dwarf frogs bigger. But, you should differentiate whether your dwarf frog is getting bigger due to having eggs or being fat.

To know about their usual size, you can take a look at this write-up.

Sometimes, it becomes hard for the new owners to know whether their dwarf frogs are pregnant by noticing the two mentioned signs. In addition to getting a bigger and swollen abdomen, you should check out the appetite of your African dwarf frogs.

Generally, a pregnant African dwarf frog will like to be eating less than the usual time. But, these frogs will not stop eating entirely. The amount of intaking food gets lower when dwarf frogs become gravid.

Is My African Dwarf Frog Pregnant Or Bloated?

In several cases, African dwarf frogs may retain excess fluid built up in its body. Your dwarf frog can get bloated due to various reasons. Such as impaction, bacterial infection, calcium deficiency, etc.

But, the new owners get confused about whether their African dwarf frog is pregnant or bloated. Since dwarf frogs get bigger in both cases, it becomes difficult to find out the actual cause.

There are a few ways to differentiate between the state of pregnancy and bloating in African dwarf frogs. Let’s check these out.

The abdomen of African dwarf frogs gets swollen in bloating and pregnancy. But, the external look of their abdomens can give you the exact sign.

In the case of dropsy, the swollen belly of the African dwarf frog looks flat and smooth. The abdomen looks suitably round. On the other hand, you can realize that your dwarf frog is pregnant by the irregular shape of its swollen belly.

If your African dwarf frog carries eggs, its swollen abdomen will look like a bag full of marbles. It is the most prominent sign of determining whether your dwarf frog is pregnant or bloated.

Check this article to know how long African dwarf frogs can go without food.

Lethargy or weakness is another prominent sign of dropsy, along with bloating. If your dwarf frog is bloated, it’ll float weightlessly on the surface of the water. On the other hand, a pregnant dwarf frog does not show less mobility.

Aside from bloating, African dwarf frogs are prone to several types of diseases. Let’s go through this article to know about 12 other health problems of dwarf frogs.