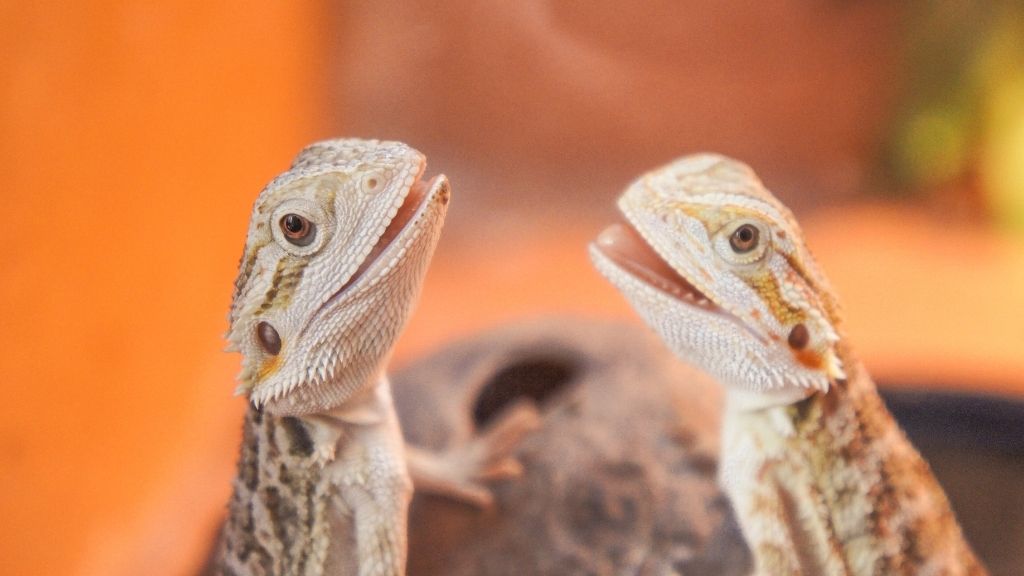 Why bearded dragons can’t live with each other? There are many reasons behind that. In the rest of the article, I’ll explain each of these reasons in detail along with some other frequently asked questions. So, keep on reading.

Here’s the response I got:

As you can see, the admins clearly forbade keeping a male and female bearded dragon together. The reason being: bearded dragons are very dominant, especially the male ones. One bearded dragon can’t stand the other in a small enclosure.

There are many reasons behind the fight between two bearded dragons. In this section, I’ll discuss some of the most prominent reasons. Hopefully, the explanations will shed clear light on why bearded dragons shouldn’t live together.

Males Are More Dominant Than Females

Male bearded dragons tend to be much more dominant and aggressive than their female counterparts. This is one of the most prominent reasons why male and female beardies fight.

As male bearded dragons are very dominant, they don’t want any other competitor inside their territory. As a result, when you keep both male and female or two bearded dragons in a small enclosure, they both see each other as an intruder in their space.

Consequently, fighting breaks out to see who is the winner. That’s why it is never recommended to keep two bearded dragons together.

The Male Beardie Can Bully The Female

As I have already said male bearded dragons are much more dominant than the females, you can easily guess that the male will constantly harass the female. It’s just like your high school all over again. The big boys always bullied the little ones, right? The same happens if you keep a male and a female bearded dragon inside the same enclosure.

Eventually, bullying can lead to a serious fight between the male and the female bearded dragon.

Bearded dragons are originally from the Australian desert. In the desert, there is a very shortage of food. So, the animals have to be very competitive about their food. The same happens for bearded dragons.

Though the captive bearded dragons are in no way related to the wild ones from Australia, they are still very competitive about food.

So, if there are two bearded dragons inside a single enclosure, they will most likely fight over the food. If there is only one feeding bowl, then the chances of fighting will rise even higher. This is just their natural instinct, you can’t do anything about it.

Is There Any Way To Keep Multiple Bearded Dragons Together?

Before explaining the rules, let me clear that I am not in any way encouraging you or giving you permission to keep multiple bearded dragons together. This is just if you need to keep 2 bearded dragons temporarily in a single enclosure. This will not work permanently. You must find a way to keep both of the bearded dragons in separate enclosure eventually. Also, even if you follow all these rules, there are no guarantee that your bearded dragons will not fight. So, proceed with your own discretion.

Why Does My Male Bearded Dragon Attack My Female?

A male and female bearded dragon will most likely fight as they are very territorial and dominant. They can fight over territory, food, or basking place.

Will A Male Bearded Dragon Eat The Female’s Eggs?

In wild, a male bearded dragon can eat the female’s eggs if there is a shortage of food. Even the female can eat her infertile eggs when food gets too scarce. From eating the infertile eggs, the female gets some of her energy back to survive another day.

So, there you have it. A male bearded dragon will most likely kill a female one if they are kept together in a single enclosure. The main reason behind this is the dominant nature of the bearded dragon. There is nothing you can do about it.

You might think that your bearded dragon is getting lonely inside the enclosure. But that’s not the case because beardies are solitary animals and they like to be alone. So, there is no need for you to keep both male and female bearded dragon in a single enclosure.