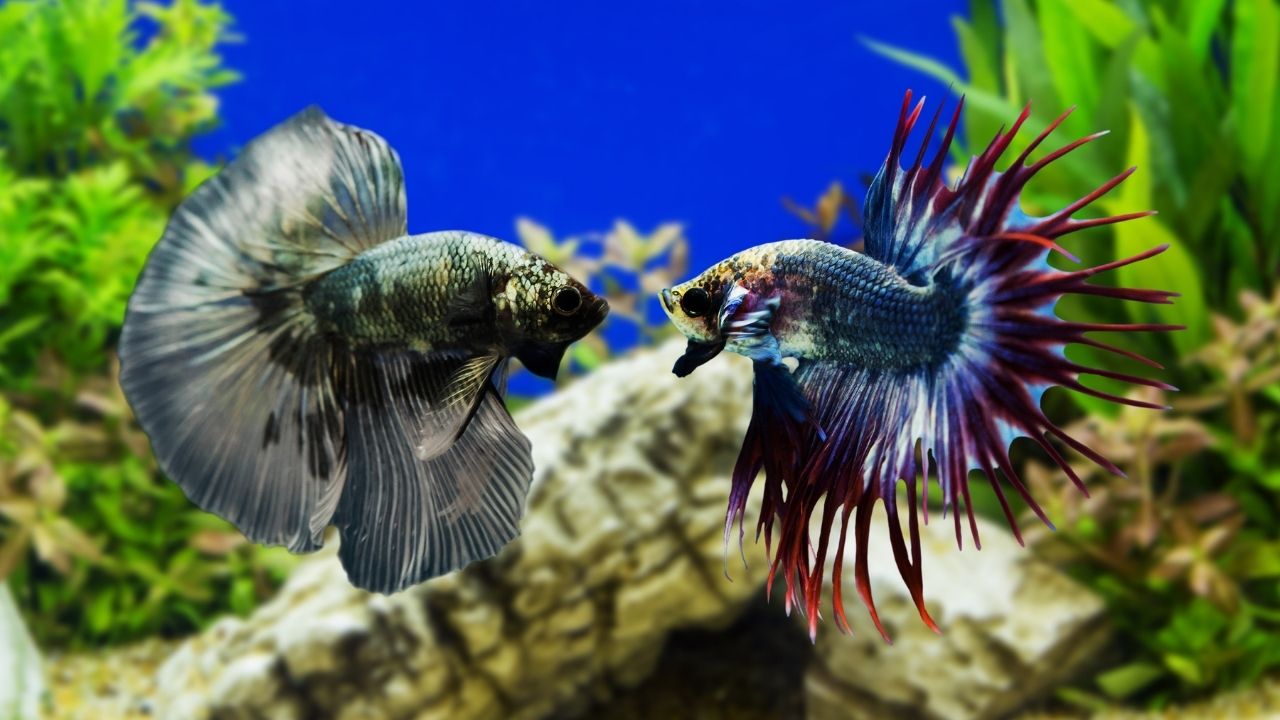 Many adore Betta fish for their appearance and intelligence. But you’ve probably heard or seen that males can be quite aggressive. So much so that you’re probably wondering, “Do Betta fish fight to death?”

Male Betta fish bred in captivity can fight to their death. But Betta fish typically don’t fight in nature.

Selective breeding is the main culprit behind their aggression. But there are things that you can do that might also set your Betta fish off. I’ve provided a brief history of Betta fish’s selective breeding and how to keep them docile so you can avoid any incidents.

Do Betta Fish Fight to Death?

You may have noticed your Betta fish displaying extremely aggressive behavior. It may be chasing other fish away. It may even be biting other fish’s fins or tails.

Your Betta fish can fight to the death if their aggression is triggered. This is exclusively true for the male Betta fish. They will either fight each other in tanks, or they will chase off other fish.

If you have vividly colorful, patterned Betta fish in your tank, then they are probably male. Also, these features are almost always visible on Betta fish bred in captivity. Male Betta fish of these variants have a history of selective breeding for fights.

If you’re thinking do Betta fish fight to death in nature, the chances are lower. In fact, in nature Betta fish have a very different approach to settling contests.

Do Betta Fish Fight in Nature?

Male Betta fish have the urge to physically defend their territory. They will patrol the area they claim, chasing off any who might try to compete. Betta fish will not use chemical or physical markings as they would be washed off in the water.

In nature, male Betta fish rarely fight. If they find invaders in their territory, they flare up. They will make themselves look bigger and more imposing to intimidate their opponent.

In most cases, the smaller male Betta fish will run away. Male Betta fish also have no want of space in nature. They typically don’t attack each other because of abundant space.

However, captive male Betta fish do fight to death. Selective breeding coupled with mishandling can stress a Betta fish to remain constantly alert and aggressive.

Why are Captive Male Betta Fish So Aggressive?

Betta fish are known as Siamese Fighter fish too. They were bred in Thailand, formerly Siam for gladiatorial fights. The people of Thailand call them “Pla-kad,” which translates to “biting fish.”

In 1800, Betta fish could be found living in rice paddies in Siam, Malaysia, and some other countries. The children would collect the Betta males so that they could conduct fights. The winner of each match kept on competing till only one village champion remained.

The wild Betta fish couldn’t fight for more than a few minutes. But this wasn’t enough to entertain people.  So, the Siamese people began to selectively breed the Betta fish to create hyper-aggressive and resilient.

The result was Male Betta fish that could fight for hours. The fights were often more about endurance and led to the loser’s death or crippling injuries.

Now Betta fish are bred separately in captivity for keeping as pets. But this change wasn’t made until 1910 and after. So, captive male Betta fish still retain their hyper aggressiveness.

Are There Other Reasons Why Captive Betta Males Aggressive?

There are other reasons which can set a captive Male Betta fish off. These causes mainly stem from uninformed keepers and mismanaged space.

Betta fish are one of the most popular fish in the United States and Japan. But the popularity and vibrant appearance make many forget that they are not “starter fish.” Betta fish are often kept by uninformed people who trigger their aggression, ending up in the fish’s deaths.

Here are some reasons why a male Betta can become aggressive. If you have done any of these, take action immediately.

Small tank size, bad aquarium conditions, no objects for interaction can cause stress and boredom in Betta fish. Bored or stressed Betta fish can become aggressive easier, and these emotions can enhance their aggression too.

A very important fact that people forget is that Betta fish are smart. They can understand their environment and can express different emotions accordingly. So, they can express aggression, disinterest, and stress distinctively.

How can You Tell if Your Betta Fish Is Aggressive?

Betta fish display some common behavior if they are stressed, bored or aggressive. But there are some distinct behaviors that an aggressive Betta fish will show. If you spot these behaviors in tandem, you can be sure that your male Betta is angry.

The constant state of wariness will force it to skip eating and resting. Aggressive Betta fish will attack any fish or object it deems as a threat. If you want to prevent this from happening at all, you can take some precautions.

How to Keep Your Betta Fish Docile?

You want to keep your Betta fish docile, so it doesn’t escalate to a lethal situation. Thankfully, simply taking good care of aquarium conditions goes a long way. You can simply follow these basic practices to reduce any chances of aggression.

Following these steps can help you avoid triggering your Betta fish. If you still see your Betta fish get aggressive, try changing aquarium conditions, food, or see if any other fish are provoking it.

It’s quite common for beginners to keep other aggressive breeds like Rainbow Sharks, Jewel Cichlids, or Tiger Barbs. These fish can attack your Betta fish, forcing it to defend its territory. If you have any other fish in the same tank, it’s best to always check if they can be aggressive or not.

You don’t want to know do Betta fish fight to death with your fish. Betta fish are quite temperamental and need attentive, informed care. Without proper handling, you could end up losing all your fish. So, it’s best to learn extensively about Betta behavior before you decide on keeping them in your tank.