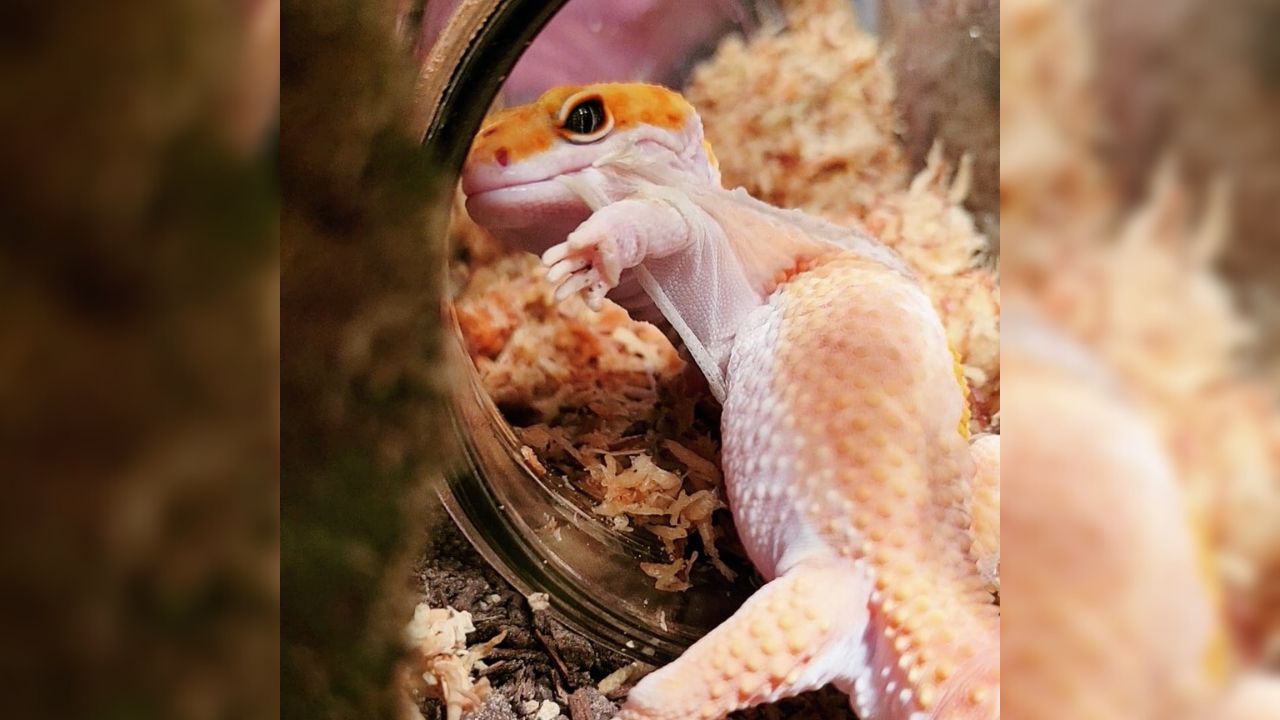 Leopard Geckos have different behavioral activities and all of the activities they do gives some reason behind them. One of them is doing a death roll which might seem that your Gecko is playing when it is actually suffering from something else.

Leopard Gecko death roll means when Leopard Gecko flips over its back and rolls on the ground. This is not normal in every gecko and the reason behind this activity is – Enigma syndrome which is life-threatening for them. The death roll can indicate other health-related issues as well.

If you want to know more about the death roll of a Leopard gecko and what it actually means, keep on reading till the end!

What Is A Death Roll?

Leopard Geckos are fun creatures and they love certain activities, such as licking you, doing glass surfing, and so on. Leopard geckos sometimes flip over their back meaning it stays in a manner where their back touches the ground and the belly remains upward.

When your Gecko does and then rolls on its back, it may look cute and funny when in reality this is a symptom of a very fatal disease of Leopard Geckos. This is not a natural thing in Leopard Gecko. This is basically due to a disease named- Enigma syndrome.

Enigma syndrome is a disease that affects the function of the brain of Leopard Geckos. This is a genetic disorder, that makes it scarier because in this case, basically, parents pass this gene related to the syndrome to their baby Leopard Gecko.

When a Leopard Gecko has Enigma syndrome, the disease actually affects the sense of equilibrium in the Leopard Gecko. The brain cells that are responsible for the equilibrium of the body get affected and lost.

As a result, your Leopard Gecko does not understand the difference between up and down and it starts to roll over its back which is concerning.

When your Leopard Gecko starts flipping over its back and rolling, this is a possible sign that your Leopard Gecko has the same disease too. You will often see it doing this similar activity very frequently and the more time progresses.

Hence even if the flipping over and rolling you should try to understand the disease related to other behaviors and diagnose it. Upon diagnosing, make sure to talk to a vet in order to save your Leopard Gecko.

Also, the Leopard Geckos that suffer from this disease should not be allowed to breed. The reason is very obvious.

If one of the Leopard Geckos chosen for breeding has Enigma syndrome, it will definitely affect their inheritance as this disease is an autosomal dominant type. Hence it’s better not to let the affected ones breed especially and keep future generations safe.

How Does A Leopard Gecko Get Enigma Syndrome?

Basically in order to know how a Leopard Gecko gets this disease, you need to understand the concept of Mendelian inheritance. Leopard Geckos have 19 pairs of chromosomes in their body and among them, there are “alleles” which are two copies of each gene. In order to have Enigma syndrome, a Leopard gecko only has to have a pair of defective genes in its body.

This disease occurs in an autosomal dominant manner. Let’s imagine that there are two genes, “E” and “e” in which the “E” is the dominant gene and the “e” is the recessive gene.

Now when two Leopard Geckos breed anyone having enigma syndrome, the possibility of the breeds having this disease is three: “EE”, “Ee”, and “Ee”.

In the case of the Leopard gecko having the homozygous “EE” gene, this fatal gene will definitely be passed to another generation and cause the same issues. But this can be avoided if you previously know which Leopard gecko has this disease. When you get to determine the affected one, do not take it for breeding. This way you can prevent the disease from happening and passing from generation to generation

Other Symptoms Of Enigma Syndrome

Stargazing generally means seeing the stars or seeing the sky. But in the case of a Leopard gecko having Enigma syndrome, this star gazing means when your Leopard gecko stares in a particular direction for a long time and does not respond to anything for a moment. After a few times, it gets back to reality which is basically what star gazing is all about.

This is another sign that your Leopard Gecko tilts its head around due to the loss of balance. It can tilt its head in an unusual manner. But this can also be a sign of ear infection or malnutrition.

Circling is basically an activity that a Leopard gecko does when it suffers from Enigma syndrome. It basically runs in a circle to catch its tail due to the loss of balance and affected thinking capabilities.

This continuous circling can create nausea in them so you can help your Leopard gecko by lowering the power of the light. This way it will not be able to see its tail and stop running for it.

Just as mentioned, the Leopard gecko tilts its head and runs behind its tail for a long time. These are just examples of how the Leopard gecko’s daily activity gets affected due to Enigma syndrome and how it conducts repetitive activity.

Enigma syndrome really affects the brain and thinking capability of a Leopard gecko and in case of hiding, your Leopard Gecko will fail to find a good place. Instead, it will hide in places where it generally never hides or start exploring the part of the tank where it has never been.

Seizures are the most fatal outcome of Enigma syndrome. Basically, the limb of the front part gets affected severely and becomes numb. Hence when your Leopard gecko tries to lift any of its limbs, it will scream in pain and make strange noises that you have never heard of.

Due to the affected brain cells, your Leopard gecko might shake a bit every day due to Enigma syndrome. This happens mostly when your Gecko tries to stabilize itself. The loss of muscle function does not let your Leopard gecko move or work properly without shaking.

When your Leopard gecko has Enigma syndrome, it will never be able to work properly and will definitely miss a lot of things including its prey. Your Leopard Gecko will not be able to find or catch its prey

How Does The Enigma Syndrome Affect Your Leopard Gecko’s Brain?

There are many ways through which Enigma syndrome can affect Leopard Geckos’ brains. But the most well-known one is when this syndrome affects the cells that help in coordinated movements of the body.

This occurs when misfolded proteins react with the normal proteins which make clumps of all of these. Thus cell functioning gets disrupted severely and affects the cell functions, which ultimately causes cell death.

This can affect other parts of the brain as well. But there isn’t sufficient information regarding this disease. Hence more research work is needed.

How To Take Care Of Leopard Geckos Having Enigma Syndrome?

There is still no cure available to treat Enigma syndrome in leopard geckos. Hence the only thing you can do is to take care of and help your Leopard Gecko in different ways:

Leopard Geckos are very active and playful reptiles and people mostly own them to have good company every day.

This way at least your Leopard Gecko will be kept safe and less likely to suffer from this disease in an acute manner.