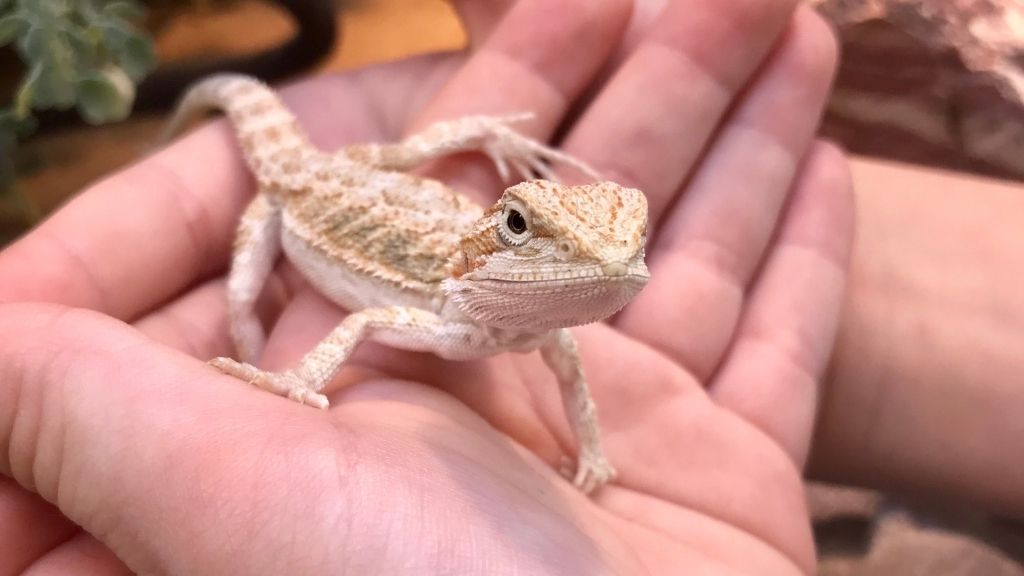 You might have found this thing pretty weird. Thus, in this article, I shall clear up your confusion describing their cannibalistic nature, reason, other concerning issues, etc.

The experienced bearded dragons’ owners always regard beardies as calm and docile reptiles. So, it is a bit shocking to know that this friendly pet can eat the akin bearded dragons.

Moreover, In captivity, bearded dragons can get involved in a fight over dominance, food, basking space, and so on. Eventually, these fights lead to cannibalizing or killing each other. If you are curious to know why your bearded dragons are fighting, you should click here.

Do Bearded Dragons Eat Their Eggs?

Many bearded dragon owners shared their experiences of noticing their bearded dragons eat their eggs. Though this scenario is pretty unbelievable, eating your eggs is not uncommon for many wild animal populations.

Generally, bearded dragons remain pretty hungry after laying a certain amount of clutches of eggs. So, if you do not provide the required amount of food for your beardie, she will end up eating her eggs. Due to a strong appetite after laying eggs, such a tragic incident can occur.

Bearded dragons do not have the sense of kin recognition. As a result, the parent bearded dragons often end up eating their babies under any circumstances.

When Can A Bearded Dragon Leave Its Mother?

You might be concerned about separating a baby beardie, after hearing about bearded dragon’s cannibalism.

Why Do Bearded Dragons Eat Their Babies?

It is pretty hard to answer why bearded dragons eat their babies. After researching a while, I have found out several probable reasons for this nature of bearded dragons. Let’s check them out.

Bearded dragons can not recognize their offspring. Since the mother beardies can not distinguish between their own and other babies, they mistake the babies as foods. Moreover, there is a tendency in wild-life creatures to eat up others’ babies to reduce the competition.

Since beardies can not recognize their babies, they feel no emotional connection or bonding. As a result, bearded dragons eat their babies thinking of them as their enemies.

Sometimes, the environmental condition forces bearded dragons to eat their babies. If you do not provide the required amount of food in captivity, the parent beardie will eat her babies to fulfill her hunger. Due to no kin recognition, they think of their babies as foods only.

Moreover, if the surrounding is not supportive of bearded dragons, there is a possibility of no survival of the newly born babies. So, bearded dragons may think to cut off the losses from the environment. It happens when there is a shortage of foods, extreme hot or cold weather, and so on.

However, a new mother-bearded dragon remains pretty hungry right after laying the eggs. So, to get back the energy of producing eggs, bearded dragons eat their sick babies in harsh conditions.

4. Solitary In Nature: Do Bearded Dragons Like To Live Alone?

You might have already known that bearded dragons are solitary. They do not like to share their space, food, or opportunities with any other pets, let alone their babies.

Since beardies like to live alone, they fight for small reasons, even with their babies. If they turn aggressive, their fights may lead to killing the baby bearded dragons.

Do Bearded Dragons Care For Their Babies?

Bearded dragons do not care for their babies.

Will Bearded Dragons Eat Each Other?

If the situation turns worse, bearded dragons will kill the other beardie. So, it will be possible for bearded dragons to eat each other even if they have cohabited well before.

Thus, you should separate the bearded dragons as early as possible. The sooner, the better.

Can You Put 2 Baby Bearded Dragons Together?

Eventually, the baby bearded dragons may end up injuring or killing each other.

Can You Put A Baby Bearded Dragon With An Elder One?

As a beginner, you might think of keeping two bearded dragons together for their accompany. It is pretty natural to think of putting a baby beardie with its mother. But, you are going to make a horrible mistake by taking such a decision.

You should not put a baby-bearded dragon with an elder one under any circumstances. An elder bearded dragon will try to take control of the entire tank. As a result, the elder one will snatch away the foods, basking space, water, and so on.

Thus, the baby-bearded dragon is bound to fall sick and weak. Moreover, older bearded dragon tends to bully and attack the younger one.

An adult bearded dragon usually needs 40-55 gallons of space. If you put more than one bearded dragon in a small tank, there will be fighting over everything.

Since these beardies do not recognize any of their own akin, they’ll attack their babies too. In the worst-case scenario, the baby-bearded dragon will get injured and even die.

How Do You Keep A Baby Bearded Dragon Alive?

Not to mention that the infertile eggs are of no use. But, you have to take care of the fertile eggs to ensure getting a healthy baby bearded dragon.

To keep your baby bearded dragon alive, you can separate and incubate the fertile eggs. Make sure that the eggs are kept in a moist environment.

Otherwise, if a baby beardie is born in the female beardie’s tank, you should remove the baby soon. It is the very first rule of keeping your baby bearded dragon alive.

For baby bearded dragons, you should choose tanks of at least 40 gallons. But, you need to upgrade the enclosure gradually as your baby-bearded dragon grows up. If you want to know more about bearded dragon’s tank, you can click here.

Besides, you should provide UV light to their enclosure to help them process calcium. Moreover, bearded dragons of all ages require a basking space in their tank. So, you can fit lighting and create a basking spot of 100-110 degrees Fahrenheit heat.

Although you should create a dry environment mimicking the natural habitat, you must ensure keeping them hydrated. If you do not want your beardie to become dehydrated, you should keep water sources for them.

After setting up a sturdy enclosure, you should take a look at the diet of your baby beardie. Do not forget that the diet of a baby-bearded dragon consists of 80% of insects and 20% of vegetation.

Lastly, if you notice any abnormalities or health issues, you should not delay taking your baby bearded dragon to a vet.