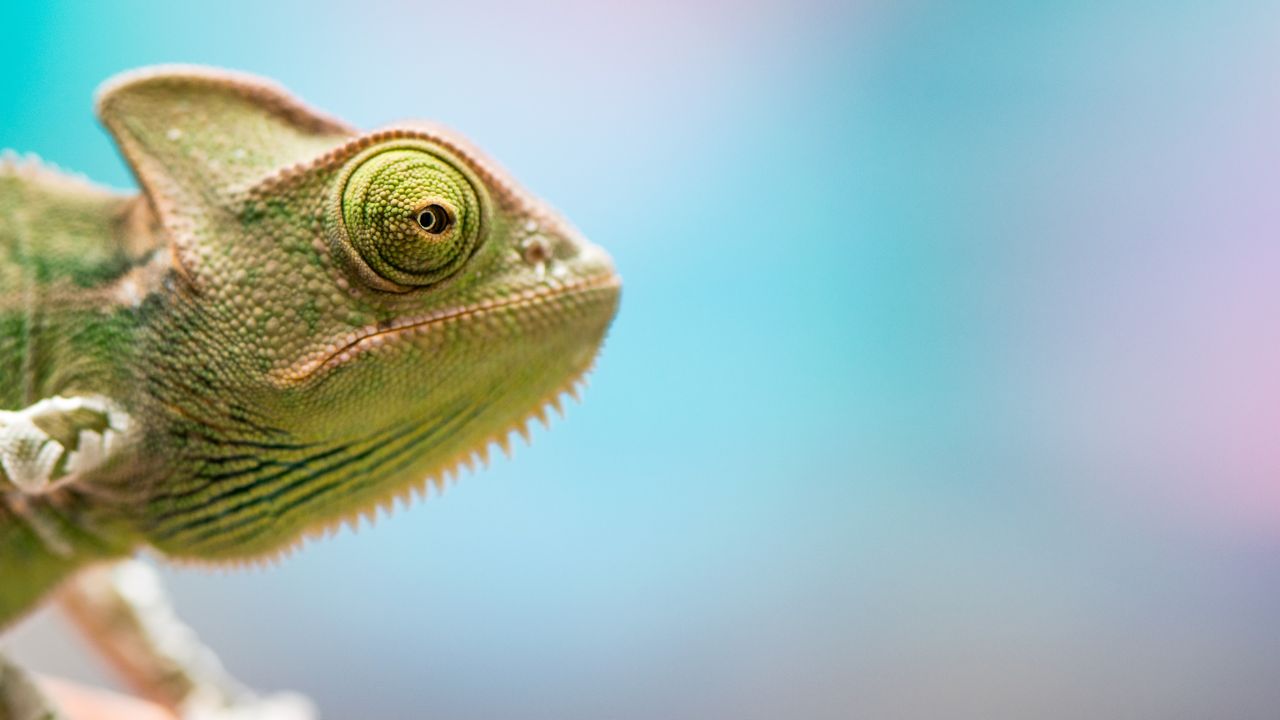 Have you ever tried looking back without moving your head? Even if you’ve tried, we bet you’ve failed brutally. After all, nobody said that you’re a chameleon, right? But why do chameleon rotate their eyes in the first place?

Chameleons rotate their eyes because they scan their surroundings in search of food. Another reason to do that is to stay alert from the presence of predators and that’s without moving their heads.

But how a reptile can possibly rotate their eyes that way? After all, we haven’t seen any other lizard doing such kind of a thing so effortlessly. Well, let’s find out how can these amazing reptiles manage to play with their eyes like that.

Why Do The Eyes Of Chameleons Move?

Do you know what makes (right after their color, of course) the chameleons among the most unique and fascinating of any animal? Their eyes.

Both of the animal’s eyes can move in their own axis, giving it a nearly 360-degree field of vision. Due to a minor blind patch of around 18 degrees at the back of its head, a chameleon’s field of vision is 342 degrees.

Thanks to this anatomy of their eyes, they’re among the most regonizible reptiles that enjoys panoramic view. This also gives them a horizontal field of view of 180 degrees and a vertical field of view of 90°. Clearly, that’s why the chameleon’s eyes are continually exploring the environment for potential prey, but it appears to be sitting absolutely still.

Because of this trait, chameleons can grab their food i.e. insects without worrying about scaring them away with their erratic movements. As the slightest movement can create the risk of loosing their prey, they utiize this advantage to fullest in order to keep the tummy full.

If the chameleon’s scanning eyes catch an insect, it will focus its other eye there for a better look and a sense of depth. When a chameleon sees its prey, its tongue darts out quickly to seize it. We’ll put some more lights on this part about zooming in our upcoming segment.

By the way, hunting down the insect isn’t the only aspect where the 360° vision comes in handy. Using this ability, these creatures constantly keep an eye out for danger, even while they forage for food, by rotating their heads.

Once more, they don’t need to move a muscle to receive a practically bird’s-eye view of their location. Because of this skill, along with their camouflaged skin and general shape, they are less likely to be targeted by predators. Looks like the characteristics they’ve developed over millions of years is being perfectly useful for them every single day.

Can Chameleons Move Their Eyes In Different Directions At The Same Time?

You probably didn’t expect something like this but yes, they do can move their eyes in different directions at the same time. Seeing this, the scientists have reached on the conclusion that the both of their eyes function separately. However, research conducted in Israel has reportedly shown evidence that chameleons’ eyes are more synchronized than previously thought.

Almost all the birds and fishes have eyes on the side of the head opposite the mouth. So, it seems that at any given time, they are experiencing the world through two distinctly different lenses. But chameleons’ protruding eyes allow them to fixate on a single target or follow two moving targets at once.

But an interesting question pops up in the middle of all of these – Can one eye tell what the other one is doing?

Researchers at Israel’s Haifa University have tried to solve the mystery and find an answer of that question. A team of researchers, led by scientist Hadas Ketter-Katz, discovered that each of the eyes has a different purpose. They were tracking their eye where they found that the eyes are continuously watching the target. She also added that each eye has a different delicate pattern of eye movements.

That’s not all! The chameleon they were running the test on was able to keep up with two separate images of an insect moving in different directions, both of which were put onto a screen.

The animal seemed to have trouble deciding between two potential targets, but once it did, it quickly refocused its attention with the other eye. Interesting, right? And guess what? In an instant, it slashed at the target with its extended tongue. Clearly, that’s enough to reach the conclusion that each of the eyes knows what the other one is looking at.

Thanks to the unique anatomy of the eyes, these reptiles come with the independent mobility and capacity to rotate their eyeballs. The ability of their eyes to focus is backed by a combination of a deep eye socket and a strong eyelid.

The scaly eyelid is distinct from human eyes as it consists of a single cone-shaped lid instead of an upper and lower lid. Leaving a small space for revealing the pupil, this eyelid literally covers up the entire eye. These eyes are mounted on separate turrets, allowing them to move independently, even in opposite directions.

As a result, they can focus in on potential bug prey thanks to their eyes’ wide range of motion. They can have one eye on their next meal and the other on any potential dangers that may be approaching from behind.

But there are some researches support that the chamleon’s eye movements are not entirely independent. It seems some of the exceptions didn’t skip the eyes of the researchers. When it comes to scanning the function of both eyes are disconjugate. But when it comes to binocular tracking, they seem to work in a conjugate way.

What Is Fascinating About A Chameleon’s Eyes?

You already know how good these reptiles are with their eyes while using the 360° vision. Prey or predator – none can skip their eyes that easily. But what else in there is so fascinating about the eyes of chameleons?

Well, you might get surprised to know that but the eyes of a chameleon are like a magnifying glass, allowing it to see minute details. When compared to other vertebrates, you’ll find that they have the best magnification capabilities by far.

The combination of a positive (convex) cornea and a concave (negative) lens in their eye gifting them with this ability. As a result, they never fall short on focus, especially while using their eyes as a magnifier.

A chameleon’s vision is far superior to that of a human’s, and it also has a form of high definition. For obvious reasons, the chameleon’s advantage in the hunt for food insects comes from its ability to both magnify details up close and from far away.

And any guess on the distance? Well, from distances of five to ten meters, they’re able to clearly notice even the tiniest of insects, right after the bigger ones like worms. Thanks to their exceptional vision once again. Things here are pretty much the same that you usually do with your telephoto lens.

Hold on! There’s more to go! The ability to detect ultraviolet light is another interesting feature of a chameleon’s eye. Ultraviolet (UV) light is invisible to the human eye because of its shorter wavelength.

All of us can see the visible light spectrum, and chameleons can as well. But what makes the chams exceptional is they also have the ability to perceive the ultraviolet light spectrum.

Do Chameleon Eyes Have Night Vision?

You’re probably already thinking that a chameleon’s eyes are filled with infinite capabilities. Well, there’s no way to deny that the eyes of a chameleon are very versatile, able to magnify, swivel, and focus. But they surely are no extraordinary performers in the dark.

Just like lots of other animals out there, they too feel virtually blind when it gets dark around. Clearly, that’s the reason why they do nothing but sleep till the sun shows up again.

The Photoreceptors, or what you know as the light-sensitive cells, are located in the retina. These photoreceptors are responsible for transforming light into electrical impulses that are then transmitted to the brain for analysis.

There are two types of photoreceptors in the eyes. One of them is called rods and the other one is cones. Though chameleons got plenty of cones but are short in rods. This means, they’re good enough to see the colors but we can’t say the same about contrast. As a result, they don’t see much in the dark.

Right after their colors, it’s the eyes of the chameleons that make them stand out among all the reptiles out there. But we can’t deny the fact that those unique abilities of their eyes are what made their survival comparatively easier where not only they can hunt down their foods but save themselves from unwanted predators.