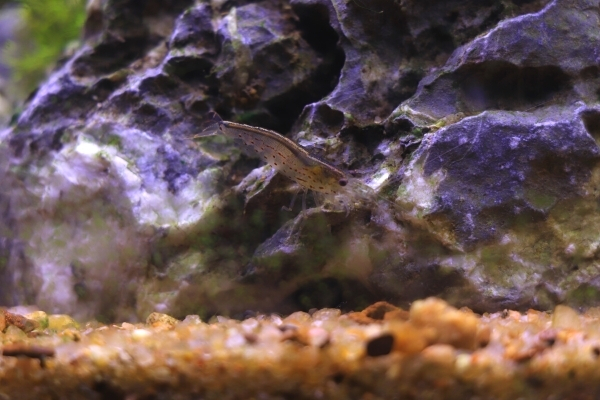 The first time Amano shrimp keepers often face a common problem that is, Amano shrimps hide a lot, and sometimes there is not even any trace of them for days or months. In this article, I will throw light on some common causes of why your Amano shrimps are hiding and what to do to bring them out.

Amano shrimps generally hide when the lights are ON because they are more active during the night. They also like to hide if they feel stressed or threatened for any reason.

As the Amano shrimps are famous algae cleaner, you may have expected them to be more active and cheerful around your tank. Tons of questions may be peeping through your mind-do they always hide like this? Is it normal or they are stressed or unwell because of any water issue? I will try to answer all your questions below.

Some Of The Most Common Cases

You are not the only one in this hobby who is facing this problem. In the case of Amano shrimps, their moods are not always the same. Therefore, there are several types of cases where Amano shrimps hide for different reasons.

Why Amano Shrimps Are Hiding?

Here I am discussing some potential causes why your Amano shrimps are hiding.

1. If They Are Kept With Other Fishes

If the Amano shrimps you have bought were in a single species tank in the fish store or used to be with other shrimps or fishes that are different from your fishes, they will naturally hide behind any safe place.

They keep themselves hidden until they discover that there is no potential threat from your other shrimps and fishes.

So, if you have arranged for plenty of hiding places in your tank, they will naturally try to hide behind them and it will provide them more area for grazing secludedly.

If you are not seeing them anywhere, you can search behind the driftwoods, under the fake or live plants, hair grasses, mosses, etc. They cleverly hide deep in the live plants and the nook and corners of the substrate, decorations, etc.

Actually, when they will be confirmed that the other shrimps or fishes do not attempt to hurt them or do not have the ability to do so, they will come out themselves.

In the meantime, the Amanos will get big enough, the other fishes will also ignore them and they will understand that there is no more threat.

Once they get settled in your tank, you may see them grazing around the tank most of the time (as they are great scavengers).

2. When They Molt And Breed

Usually, every month shrimps go through the molting process. When they shed their shell, they feel vulnerable due to the new soft shells. From a sense of insecurity, they hide behind a suitable hiding place until the shells get hardened.

A heavily planted tank with a lot of hiding places will allow them to feel safe during this period. So, if you do not see them for a few days each month, take it normally.

You might know that usually, shrimps do not tend to breed in the open water, they find hiding places when they tend to breed. So, you will not also see your Amano shrimps when they will breed.

If you cannot see them in the daytime, do not worry. They like to hide behind a suitable place during the day to avoid light, people, or other sights that make them stressed.

If you move the rocks, driftwood, etc, you may find a group of them crowding together behind those places. And if you can see one or two of them thriving in your water occasionally then you can be sure that they are getting enough food that you are providing.

Give them their regular food in the night and turn off the lights keeping a dim light on. Since they like to hover around in the dark like the nocturnals, after an hour or so they will come out frequently from their hiding places in search of food.

They feel comfortable when you are not around. So, to get a sight of them every day, you can sneak into your aquarium in the PM hours.

4. If A Few Amano Shrimps Are Kept In The Tank With Other Species

As you know, more than 95% of Amano shrimps are wild-caught and they use to hang out in large troupes (hundreds in number) in flowing freshwater rivers and streams.

So, if you put one or two or a few numbers of Amano shrimps (smaller than your fishes) with other fast-moving shrimps/fishes, they will not think your tank of their own. So, like the refugee, they will hesitate and keep themselves behind the scene as much as possible.

Although you choose peaceful community fish (maybe smaller) as their tankmates, your shrimps will get anxious at first and consider them as predators. Even a peaceful fish can attempt to attack the shrimps if it can take them in its mouth.

Even if you start with a dozen of Amano in your tank, then keep adding other compatible tankmates like betta, tetra, cory, gouramis, you will notice that it will develop a shyness in them. And at one stage, they may stop venturing out if they feel that the new fishes are capable of hurting them.

To avoid this, keep a large number of Amano shrimps together if you cannot manage a separate tank for them. The more will be their number, the better result you will get. Thus, they will not hesitate or fear other fishes and cheerfully graze and compete for the floating foods that you will provide.

If you do not want to add more Amano, no problem. You can add shrimps of different species to see your Amanos more comfortable.

Note: You can keep Red Cherry Shrimps, they are quite compatible with Amanos rather than the ghost shrimps. When ghost shrimps are kept in a large number, they can become aggressive with the other inhabitants in the tank.

5. If They Are Kept In An Uncycled Tank

Again, if you have put the Amanos in a brand-new tank (that indicates an uncycled tank), then possibly they are hiding because they are not feeling well in that aquatic environment. To see their cheerful activities you must put them in a cycled tank.

6. If They Are Overfed

Normally, if there are no other fishes in your tank, your newly bought Amanos will show their presence when you will offer food to them. When they are hungry, they will rush to take the food particles and the most dominant ones will try to snatch the foods from the others.

But I have also heard a few cases where Amanos are indifferent even when they are offered foods, algae wafers/pellets (though it is their favorite).

It may happen if you overfeed them. As they get more than enough food, they do not need to forage for algae anymore. As a result, you cannot see them.

To bring them out, sometimes you can cut off the food supplements so that they come out and search for algae from their urge.

7. If You Perform A Large Water Change Or If The Water Quality Is Poor

They are to some extent, sensitive to large or complete water changes. I would suggest smaller and more frequent water changes if there is no big issue.

They can stop eating and grazing in case of a high nitrate spike. So, you have to keep the nitrate low as much as you can with frequent water changes.

8. They Can Escape Too

If your tank does not have a lid on its top you should also search them on your floor! I do not know whether you have heard or not- they are good at jumping and climbing. So, if they do not feel well in your water, they will try to escape.

Before that check your internal filter and the spray bar also. They sometimes crowd on these places when they feel suffocated for the increasing amount of CO2 in the water.

What Should You Do If You Want To See Your Amano Troupe Always Out?

To see your Amanos thrive happily around your tank there is no better option than sticking to a single species tank.

However, if you put other species (shrimps or fishes) in greater numbers than your Amanos even in a larger tank (about 55-65g), they will not thrive as much as they would do in a 10g tank with more Amanos.

In the first case you may rarely notice them while in the second case, you may see them swimming around your tank or munching on something even when the lights are on (if you are lucky enough).

If you want to keep one or two other fishes (like one or two bettas) you can put some white clouds in your aquarium so that the Amanos do not get the trace of the other fishes.

Therefore, give your Amano shrimps a world of their own by allowing them reigning in a single species tank if you want to see their cheerful activities all day. If it is not possible choose the most compatible tankmates for them and give them a few more days to adjust and become comfortable in your tank.