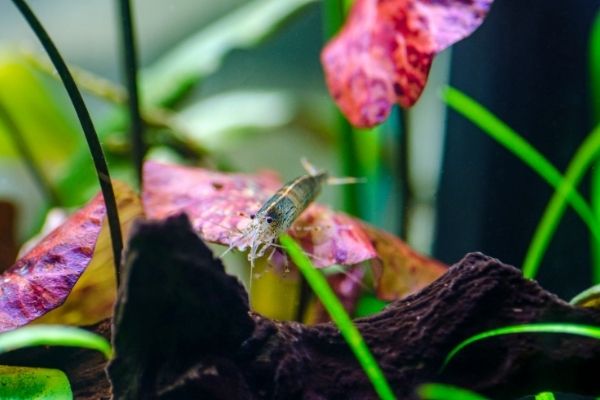 The ideal temperature for Amano shrimp is 70-80F. However, this species is quite hardy and can withstand a wider range of temperatures like 65-86F. But for their proper growth, health, and breeding you should keep the temperature between the optimal range.

In case you want to breed your Amano shrimp, you have to maintain a constant temperature in the breeder tank. You have to keep the temperature between 70-80F to grow up the larvae.

The Amano shrimp may do well even outside this range (with just reduced activity), but this will not result in good in the long run.

Many hobbyists assume that their shrimps are okay with the temperature because they are surviving. But, keeping your water temperature at the optimal range is necessary for both the proper keeping and breeding of Amano shrimp. Acute temperature can hinder the growth of your Amano shrimps or even cause death eventually.

Let’s have a look at why you should maintain a stable temperature in your Amano shrimp tank and what will happen if you do not do so.

Why Should You Maintain A Constant Temperature In Your Amano Shrimp Tank?

There are recommended temperature ranges for all shrimps or fishes where they will be healthier and more active than at any time. Certainly, there are some reasons for it.

About 95% of Amano shrimps are collected from the wild. In the wild the water temperature increases and decreases with the change of the seasons. So, naturally, a question can arise in your mind, why maintaining a constant temperature in the shrimp tank is necessary.

Unlike the ocean or river, the water temperature in your shrimp tank tends to increase or lower very quickly along with the temperature outside of the tank. However, the large ecosystems take time (sometimes a whole season) to change to new temperatures.

Since Amano shrimps are from large bodies of water, naturally they will be less forgiving to temperature fluctuations. So, it is necessary to keep your tank water within the required temperature range of Amano shrimp.

Moreover, in the wild, it could simply swim to warmer/colder areas as needed. But the shrimps in your aquarium are not so lucky to do so and they are compelled to survive in the changing temperature.

Shrimp’s body temperature varies with their surroundings. So, with the swings of the temperature of your tank, shrimp’s internal body mechanism gets affected which remains unnoticed to us.

That is why you should try to resist the sudden fluctuations in temperature in your Amano shrimp tank.

What Happens If You Keep Amano Shrimps In Higher Temperatures Than The Ideal Range?

Though higher temperatures can increase your Amano shrimp’s activity and growth to some extent, this can end up limiting their life expectancy.

When you will keep your Amano shrimps within 70-80F, you will notice an increase in their growth. At around 77-80 F you can see the maximum growth. Temperature above this will not affect shrimp’s growth rather create many issues. Your shrimps will slow down and may turn white or pale which is a bad sign.

The beginners can take it lightly because Amano shrimps will remain tough against higher temperatures. They may not show any instant reaction but it will leave a negative impact on their health and affect their metabolism directly. Very warm water will boost up your shrimp’s metabolism making them livelier or even hyperactive.

But the sudden fluctuations in temperature can be a cause of stress in your shrimps. If the temperature gets much higher, their daily food intake can lower noticeably because of their stressed condition.

Moreover, stress is one of the main causes for weakening shrimp’s immune system making them less resistant to various diseases and parasites and causing ultimate death.

When they are stressed by temperature fluctuation, they cannot defend these parasites where they could easily withstand them if they were healthy. So, in warmer water, the risk of bacterial infections and growth of Planaria colony also increases.

While the shrimps will grow quicker in the warmer water, it may also affect their molting process. They cannot cope up with the molting process and can even die eventually.

Reduces The Amount Of Oxygen In The Water

At normal temperatures, shrimps get more than enough oxygen from the tank water. When the temperature exceeds 90F, your shrimp may become hyperactive but will need more oxygen. Since warm water has less oxygen your shrimps can feel suffocated.

Moreover, the beneficial bacteria break down ammonia with the help of oxygen. Without enough oxygen, the ammonia raises to a toxic level burning the shrimp’s gills or making their breathing very difficult.

Thus, warm water can stimulate such life-threatening problems for your shrimps.

What Happens If You Keep Amano Shrimps In Lower Temperatures Than The Ideal Range?

Amano shrimps are cold water species. They cannot endure heat waves and may survive even at 50F. But, the colder the temperature will be, the slower will be their metabolism.

Amano Shrimp’s Feeding Will Be Reduced

In colder temperatures, Amano shrimps will eat fewer algae. Since most of the people keep Amano shrimps for their algae cleaning ability, this is a big deal for them certainly.

Amano Shrimps Will Be Less Active

When Amano shrimp are kept at a cooler temperature than their required range, their activity will also noticeably slow down. They will be sluggish and will not swim actively. Sometimes they will spend most of the time hiding behind any shelter in a lethargic state.

Hinder The Growth And Breeding Of Amano Shrimps

The lower temperature will decrease the rate of growth in the shrimps whether they are adult, young, or fry. And in case of breeding, it can even get stopped.

The Beneficial Bacteria Will Be Less Active

The only good thing you may notice in lower temperature that it will aid to avoid bacterial infection. But, if the temperature is very low, the beneficial bacteria will remain less active and your tank will take longer to complete its cycle.

How You Will Maintain The Right Temperature In Your Amano Shrimp Tank?

Therefore, you can see, temperature roughly affects your Amano shrimp’s whole life: from feeding, breeding to their movement, activity, everything.

To keep the temperature in favor of your Amano shrimps you can take the following steps.

To maintain the perfect temperature for your Amano shrimp choose your tank location cautiously. You should avoid the places where sunlight comes directly, places near window drafts, AC vents, etc.

For heating your tank you will only need a good aquarium heater that will warm your tank water until you get the favorable temperature for your shrimps.

When you do a water change, the temperature may fall or rise by a few degrees Fahrenheit, which will not cause any big issue. But, if you have a heater it will help you to avoid such little fluctuation and will not let your shrimps feel anything.

In the wild, Amano shrimps live in the water that is quite cool. So, if your room temperature does not fall below 65F, you will not need a heater.

If you are in a warmer area you can use an aquarium fan to keep the right temperature. If the fan is not a good option for your huge tank you can opt for an aquarium chiller, which is basically a canister filter. It cools the water that goes through it. If your area does not have very hot weather and you can maintain a stable temperature in your room, you may not need an aquarium chiller.

You can also maintain the temperature automatically using an aquarium heater controller that will turn on/off the heater and the fan as needed.