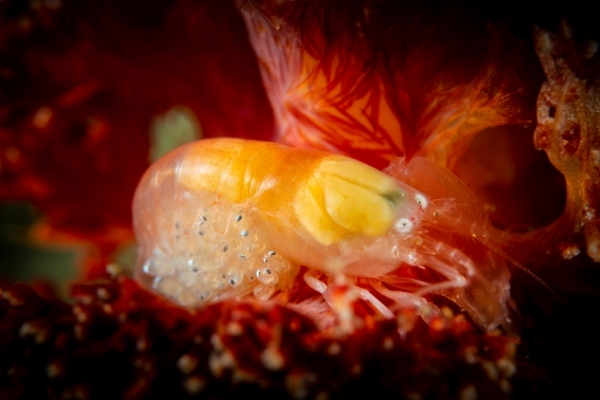 If you are serious about breeding Amano shrimp, it is important to keep a close eye when your Amano shrimp gets pregnant. Though you do not have to be an expert shrimp keeper to tell if Amano shrimp is pregnant, I am sharing here how the beginners can easily identify the pregnant Amano shrimps.

You can easily check if your Amano shrimp is pregnant by noticing closely if it is carrying innumerable dark-green, brownish or yellowish eggs underneath its belly. You will also see the amano shrimp fanning her eggs constantly with her rear legs.

Since you can’t breed Amano shrimp in your freshwater tank, it is necessary to observe the condition of the berried Amano shrimp to move it to a breeder tank at the right time. Here I am discussing in detail.

How Eggs Are Developed?

If you have both male and female Amano shrimps, the female will carry eggs in their abdomen most of the time. They will take about 4-5 weeks to release the larvae after they get pregnant. After releasing the larvae, they will mate again and produce and carry the next batch of eggs for another 4/5 months. Thus, you may see them carry eggs almost all the time.

In their identical saddle (egg nest underneath their belly) they carry about 1000-3000 eggs (depending on the age and size of the female) until they are hatched. You can easily see the egg nest which is glued to their forked swimmerets attached to the abdomen.

The dark-moss green eggs are easy to identify through their translucent body. Gradually they will turn into yellowish-brown color.

There is another way to identify the pregnant Amano shrimp. If you notice carefully, you will see the pregnant shrimp fanning her eggs constantly with her swimming legs to supply oxygen over the eggs.

Even when you are buying Amano shrimps from a pet store, you can receive berried female Amano shrimps. But to your disappointment, you will discover that those eggs never give you baby Amano shrimps until you take the proper steps.

What Will Happen To The Eggs If You Do Not Hatch Them?

Most of the hobbyists are not interested in breeding Amano shrimps. Some of them may have tried to hatch the eggs, but the majority do not even try to spend time after this extremely difficult task.

If you do not have an interest in breeding them, the female shrimp will drop the eggs after a certain period which will be a tasty food to your other shrimps and fishes!

What Should You Do If You Find Your Female Amano Shrimp Pregnant?

Transfer the berried Amano to a breeder tank when it is expected to release the larvae. When it releases the larvae finally, move her promptly to freshwater and immediately fill the breeder tank with brackish water with a salinity level of 30-35 ppt.

If you do not manage a breeder tank before releasing larvae, you have to catch them carefully as soon as they are released (a little bit tricky) and transfer to a brackish tank with the mentioned level of salinity and enough microscopic phytoplankton. Otherwise, you will lose the 1-2% remaining chance of having Amano offspring.

Note: Even if you manage to provide the correct salinity of water, it is tremendously difficult to successfully breed baby Amano shrimps because of their fragile larval condition and our limitation to mimic the wild environment in the captivity.

It is rare but not impossible to breed Amano shrimps successfully. So, if you notice that your Amano shrimp is pregnant and can manage a spare tank and some spare time, you are good to try your luck!