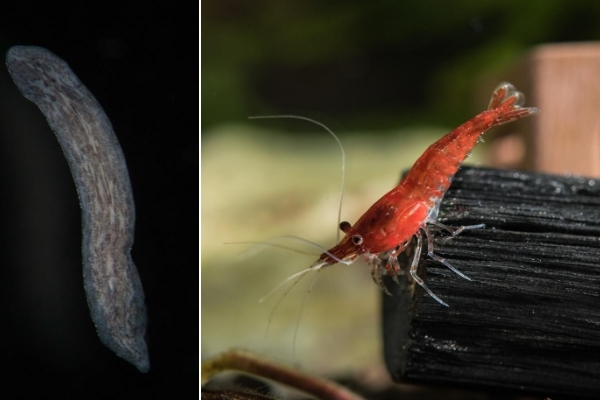 A common question most of the beginner shrimp keepers come across is “How to get rid of planaria in shrimp tank?” So, to help you guys with this serious matter, I have decided to share my experience and research.

The safest way to get rid of planaria in shrimp tank is to lay Planaria traps using baits. You can also use chemicals (Flubenol, Panacur) or Planaria eaters (Endler Guppy).

Planaria are sneaky little creatures that are quite hard to get rid of completely. However, you have to be patient and use the right techniques to make tank Planaria free. Read the whole article to know more about it.

How To Get Rid Of Planaria In Shrimp Tank?

Now that you know how dangerous these filthy little creatures are for your shrimp tanks, it’s very important to get rid of them as soon as possible before they start emptying your tank.

But you should keep in mind that removing Planaria is not an easy task since they come from dirt and are very difficult to find. If any of them still manages to remain in the tank, it can reproduce in a hundred more. And you can’t control that since they produce asexually.

In this article I am going to talk about 3 ways to get rid of Planaria in shrimp tanks:

Most people usually tend to use chemicals to get rid of these unwanted worms. Mostly when the planaria population is large. However, using chemicals can sometimes prove to be harmful to your tank’s ecosystem.

Flubenol and Panacur are the most popular Planaria control chemicals available. There are other chemicals too like Benibachi, Canine Dewormer, etc. that you can use. Read the instructions printed on the chemical packet before applying it to your tank.

You can find some eco-friendly chemicals nowadays that are made with herbs and biodegradable products preventing your shrimps or plants in the tank from getting harmed but will work endlessly for 72 hours.

You should avoid feeding your shrimps and remove the carbon filter before using the chemicals. After the chemical has started to show its effects, vacuum the tanks often to get rid of the dead planaria since they can increase the ammonia in water making it injurious to your shrimps.

Also, make sure that your shrimp tank is always well-ventilated. Cleaning the water constantly will help the procedure.

Planting traps are the safest way of killing Planaria. But it will only work effectively with a comparatively low number of planaria. Also, it requires a lot of time.

The most common trap is made with a bait, for example, insect larvae that will attract the Planaria. After the worms are trapped, you have to place the trap in boiling water to kill them. Do this same thing constantly for a couple of times to bring down the Planaria population to a tolerable number.

You can always use baits like meat, dead fish, or shrimps to lure out the worms into your traps. All you have to do is fill the trap with the bait and water and put it in positions like holes facing down.

However, if you are breeding shrimps in the tank, then using these fishes might not be a good idea since they like to feast on small shrimps too.

There are some freshwater fish too that will be more than happy to have Planaria as their food. Some of these species are goldfish, sand shiner, bettas, tiger barbs, angelfish, and many more. You can easily put them in the water and wait for actions.

However, too many Planaria can cause disturbance to fish if they get into the gills. So, you should probably be prepared to deal with this kind of situation.

Planaria are free-living flatworms, a part of the Platyhelminthes Phylum, and are linked to parasitic versions. They can be found in both fresh and saltwater but different forms and shapes. However, the main point of the article, these little hitchhikers can be found in your cherished tanks too disturbing your pet shrimps!

The most interesting as well as the most disturbing part of the Planaria is that they are hermaphroditic. That means that they can regenerate themselves after being cut into several pieces!

Now, some say that Planaria are not just regular flatworms. Rather they come with an advanced brain and surprising senses. I mean, there’s a reason that they can hide in plants, rocks, substrates, or just attach to fish bodies whenever they sense someone coming!

How Do Planaria Come To Your Tank?

Planaria are great hitchhikers and if given the slightest opportunity, they will attack your shrimp tanks.  They can come to your place while hiding behind a rock or even shrimp foods. Once they manage to get inside, they reproduce fast resulting in a Planaria infestation in your shrimp tank.

Also, Planaria can feed on literally anything in your tank including your shrimps’ wastes. So, dirty tanks are most likely to have a lot of Planaria.

Planaria are quite common worms for aquariums and they are usually harmless. You don’t have to worry much if there’s only one or two roaming around with your shrimps. However, these little creatures produce really fast and it will be soon enough that you can see hundreds of them floating around. That’s when you really need to read this article.

Generally, you can find white, black, or brown planaria in shrimp agrarians. Among these, the white ones are considered the most aggressive predators that hunt down baby shrimps and shrimp eggs as meals. There are rare cases too where they feed on adult shrimps. Sounds horrifying, right?

While brown and black ones do not eat shrimps or shrimp eggs, they can be pretty dangerous. These planaria release toxic slimes that are powerful enough to kill a whole bunch of shrimps.  Your shrimps will stun if the slime touches their belly or the planaria manage to crawl under their exoskeleton making it easy for the worms to feast on them alive.

How to Identify Planaria?

Aquariums usually get attacked by different kinds of worms. Now, in order to get rid of them, you have to identify that the worms roaming in your aquarium are really Planaria.

Planaria are really small creatures, usually 10 millimeters long and very difficult to notice unless they are huge in numbers. Like most other flatworms, they are flat but have a triangular head. Most of them are whitish, however, you can find them in a brown or black shade too. Some planaria are considered to change color according to their meal. So, don’t get surprised if you encounter a pink one!

How Planaria Reproduce In Your Tank?

Planaria are known to have two kinds of reproduction: sexual and asexual. Mostly, they go with asexual production in shrimp tanks to reproduce fast. Since the tanks have low planaria population, they try to reproduce by fission due to the lacking of mating partners.

These flatworms can reproduce through constant dropping tails or just fragmentation. In fragmentation, the Planarian stretches its body to make two separate parts that later grow a head and a tail forming two more worms.

On the other hand, dropping tails require the worms to drop their tails in still water where the tail later grows into a full Planaria.

Besides all the reproduction, the Planaria can also grow in number by regenerating from a cut or severed part.

So, this is how a couple of Planaria can multiply into hundreds in your tank.

Are Planaria Harmful To Me?

While the Planaria were never seen to harm humans, you are recommended to wear safety gloves before putting your hands in the tank to avoid sudden allergic reactions to the hand skin. Also, make sure to wash your hands carefully after you are done cleaning.

How To Prevent Planaria Attack:

You know what they say: “Prevention is better than cure!”

You don’t have to go through all the trouble of cleaning Planaria if you can stop them from infesting. And the best way to do that is to always keep your tank clean.

However, it doesn’t necessarily mean that you have to clean everything at once on a regular basis. You can just divide the parts of your tanks and make a routine of cleaning each of them one by one.

Also, make sure you don’t stir up all the dirt at once. That might cause ammonia spikes which are harmful to your shrimps.

I hope that you now understand how to get rid of planaria in the shrimp tank. Now that you know how difficult it is to get rid of them properly, it’s best if you can prevent them from infesting.

No matter what you do, just make sure nothing harms the ecosystem of the tank. Otherwise, you might as well lose your shrimps along with the Planaria.