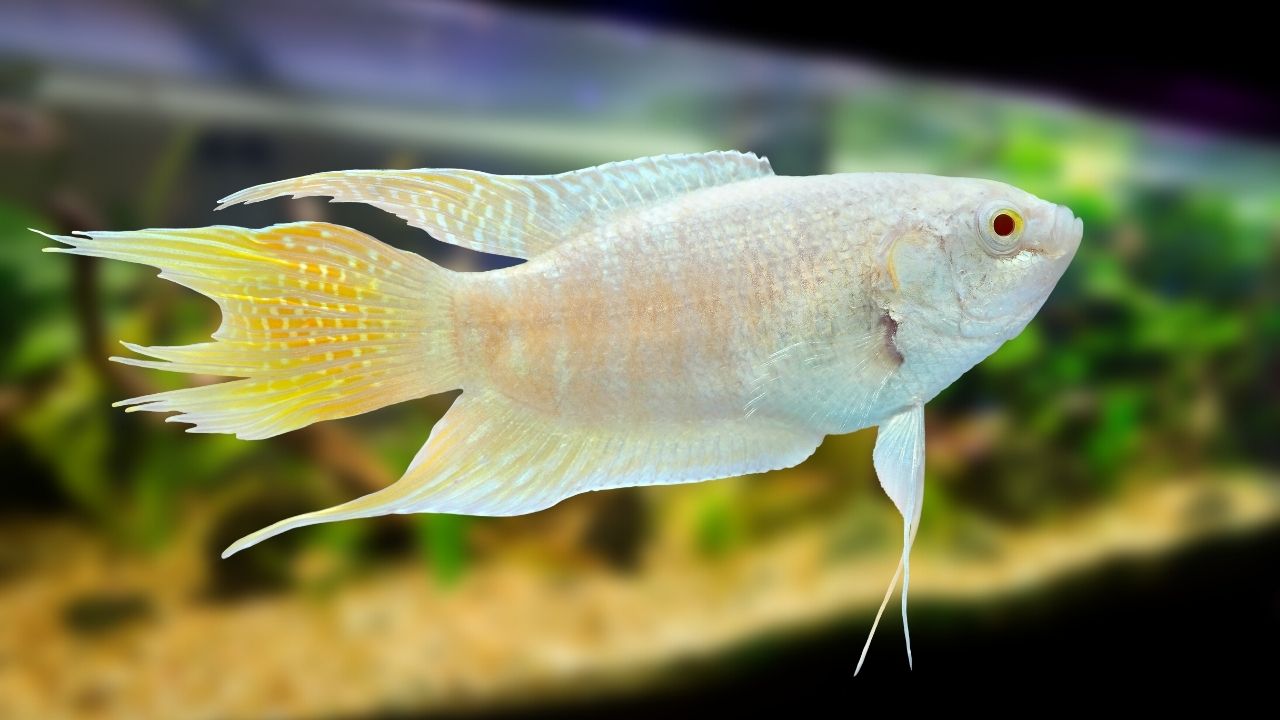 If you’re an enthusiastic Betta collector, chances are that you will be filling your aquarium even with the rarest species. There are about 73 types of Betta, one of which has been a mystery for years- an albino Betta fish. So, how rare is an albino Betta fish?

An albino Betta fish is extremely rare. This type of fish lacks any pigmentation and features pink or red eyes. Because of the genetic condition, true albinos are susceptible to health issues, such as blindness and skin cancer.

Compared to other Betta species, Albinos tend to perish before reaching adulthood. Keeping that in mind, you might be interested in other rare varieties as well. Read on this article to find out more!

Why Is An Albino Betta Fish Rare?

The albino Betta fish was first spotted by a German aquarist back in the late 1920s. The fish seemed to be weak, which was natural for albinos, and it was never bred. That albino Betta was said to have been preserved in the Magdeburg Museum.

Afterward, another albino was accidentally discovered in the early 1950s. It was a male albino Betta with pink eyes. The Betta was bred in hopes of producing albino offspring, but after a few unsuccessful attempts, it produced Bettas of a normal variant. This experiment proved that albino is a recessive gene, and to produce albino offsprings, the parents should be albino.

The only successful breeding ever done was by Kenjiro Tanaka in 1994. But, there’s not much information known about the experiment.

What Is The Rarest Betta Fish?

The rarest Betta fish in the world is the fantail Betta fish. This type of Betta resembles that of a fantail goldfish. It features two caudal fins located side by side and connected at a small point at the top.

Because of its rarity, fantail Betta isn’t sold at stores. Even if you happen to find one, you can expect it to cost a pretty penny. Not much information about this variety is known either!

White Bettas fall in between the range of ubiquity and rarity. They aren’t much preferred by hobbyists because of their brightly-colored counterparts. Although they have pure white color, their long, flowing tails can surely make any well-lit aquarium look interesting.

What Are The Rarest Betta Fish Colors?

Betta fish come in a variety of colors, including dull red and royal blue. They come in even some rare colors that you might be able to obtain from your local supplier.  If you’re interested in knowing all the rarest Betta fish colors, you can check out the list below.

Just like albino animals, albino Bettas lack pigmentation. These Bettas feature pink or red eyes and tend to be blind. Their bodies are translucent where the organs are visible under bright light. Due to the lack of skin protection, albino Bettas are susceptible to skin cancer.

True green Betta fish are considered very rare. Some people say that they do not exist, and even if they do, the coloration often appears as turquoise. However, shining a bright light against the fish can give an iridescent green hue.

Purple Betta fish are also rare Bettas that aren’t available in their natural purple color. Other than true purple, these Betta fish are a mixture of purple shades, such as violet, red, blue, or lavender. They appear purple only under a light.

Yellow Bettas are rare and known to be hard to breed. These species usually have different shades of yellow from bright to soft.

The Orange Dalmatian Betta fish is a rare variety that is also challenging to breed. They are bred with a solid orange and a Red Dragon Betta. These Bettas have a pale orange pigmentation with dark orange speckles on the fins.

What Is The Most Common Betta Fish Color?

If you visit a few Betta fish stores, the most common Betta color you’ll come across is blue- notably steel blue, royal blue, and turquoise blue.

What’s interesting about these Bettas is that, unlike most fish that show iridescent blue, Bettas possess vivid shades of blue.

True pink Bettas are uncommon, and you will never come across one in the wild. The reason is that they are created through careful breeding. Although your local fish store might not have them, they are sometimes available in specialized Betta fish stores.

Many people often mistake albinos and cellophanes for pink Bettas. The internal organs of these species give a pinkish tinge through the translucent body, making it appear pink. White Betta fish can also appear pink when it is exposed to different lighting.

Other than that, a Betta fish, in general, can turn pink when it is stressed.

Betta enthusiasts are always on the lookout for colors that are almost impossible to find. Some of these rare Betta species are either created through careful breeding or naturally formed by mutation. It’s no surprise if these fish carry a hefty price tag of thousands of dollars.

Unless you’re an expert in Betta fish-keeping, we recommend you stick to the common varieties. That will give the savvy hobbyists not only the chance of adding rare species to their aquarium, but also handle them well.