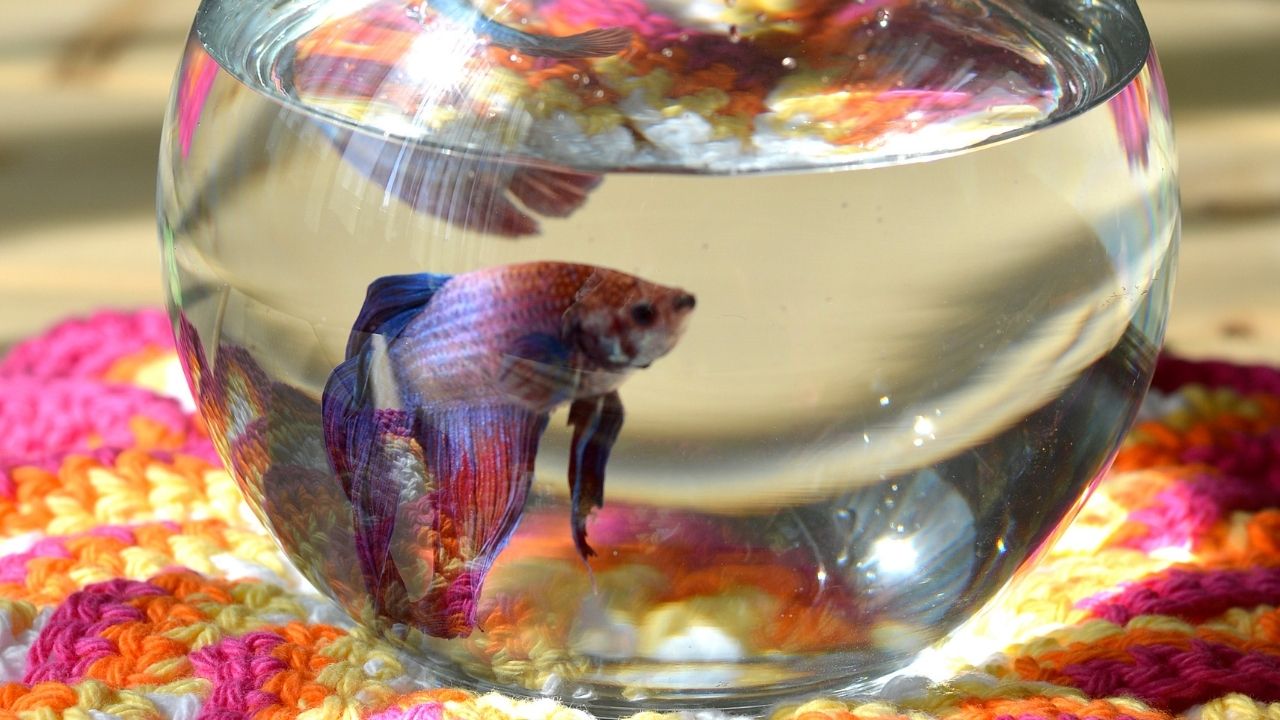 Betta fish are known to be the more resilient aquatic pets. You can expect your Betta fish to fight off most issues that would cripple other fish. But your Betta fish would need a proper amount of space to display its splendor.

Betta fish can live half of their average lifespan in a fishbowl, which can be even less than a year. A fishbowl limits their Oxygen, nutrient intake, and space to move around. Betta fish need intellectual stimulation too and become stressed in a limited bowl.

Why Can’t I Keep My Betta In A Bowl?

It isn’t just the volume of water, but the shape of the fishbowl that caused Betta fish harm. Here are some reasons why you want to keep your Betta fish away from the fishbowl.

Most fishbowls come in under 5 gallons. A limited amount of water actively stops a Betta fish’s growth. Oxygen saturation is much less than what the Betta fish would need. Without Oxygen, it may asphyxiate and die.

Your Betta fish is quite resilient, so it will not immediately expire. Instead, it will slowly suffer from these issues.

Water is also stagnant in a fishbowl, so you’ll be dealing with no method of increasing the saturation but water change.

Water doesn’t just work as a liquid for your Betta fish to swim in. It also contains vital nutrients that your Betta fish needs to survive. In a fishbowl, the nutrients will not be in enough amount or be too concentrated.

Ideally, water for Betta fish contains a certain concentration of minerals. Water for your Betta fish should contain the following properties.

Without these properties, your Betta fish will likely face development and functional issues. But if you artificially add the compounds to your water, it may become concentrated and kill the fish.

Limited water will also have faster toxin buildup. Toxin naturally develops from the Betta fish’s eating, excretion, and simply from stagnant water over time. There will be Nitrites and Nitrates in the tank that will poison your Betta fish.

Chlorine and Chloramines, Copper, and other heavy metals are commonly found in water. Typically, tanks contain enough water for the dilution ratio to be negligible. But in a fishbowl, your Betta fish will face more concentrated dilution and become affected.

Your Betta fish also have little space to move in a fishbowl. As most bowls are smaller than 5 gallons, there is next to no room for the Betta to swim around.

Even if you get your hands on a larger than 5-gallon fishbowl, it isn’t ideal. The spherical shape of the bowl causes your Betta fish to swim around in circles. A single way to move around is frustrating for Betta fish, and it may trigger self-harm.

Your Betta fish will suffer from metabolism and digestion issues if it cannot swim around. And a fishbowl’s shape inhibits a Betta fish’s movement by design. This is very problematic for Betta fish, who are active enough to jump out and in of the water for fun.

No Room For Activity

Some fish owners may think that Betta fish need no companions in a tank. Especially male Betta fish are extremely territorial. So, Betta fish may be fine with little room for activity.

This assumption is entirely wrong. Betta fish may be territorial, but they love their space. Betta fish are intelligent creatures, and this intelligence comes with a need to explore.

Larger space is needed for a Betta to move around and explore. Your Betta fish needs some toys and terrain changes in the tank for proper intellectual stimulation. If the fish can play around, or find spots to explore, hide and rest in, it will be happy.

Fishbowls deprive your Betta fish of that freedom. You can try to put some toys or terrain in, but the shape and limited space do not allow for much. You’ll be cramping the space, even more, preventing your fish from moving at all.

You’ll sometimes find Betta fish stretching out their fins and tail, making a display. While you may find it beautiful to look at, this is aggressive behavior. Your Betta fish is making itself look bigger and presenting itself as a threat.

This action is called flaring. Naturally, your Betta fish will do this sometimes. But fishbowls can force the Betta to flare more often.

If a fishbowl is small and its walls are a little reflective, it will trigger your Betta fish. It will be unable to recognize its reflection and flare at it constantly. This will put a strain on the fish’s psyche, and cause stress.

Aside from all the issues that the Betta fish would suffer from, you would also find a fishbowl inconvenient. Many factors make keeping the Betta in a fishbowl impossible for you.

Why You Would Find a Fishbowl Problematic?

You’re probably wanting to keep the Betta fish in a fishbowl because your think it would be easier. It takes less space, low effort to fill back up, and should be easy to clean. It also doesn’t cost much.

But you’re in for a horde of trouble if you choose the fishbowl. Here are some of the issues you’ll have to face.

Just for 5 gallons of water, it is recommended that you swap out 40% to 50% of water in a tank per week. A fishbowl will contain less water and require more frequent changes of larger volumes of water.

A fishbowl will cause you to constantly worry about water quality too. You’ll have to deal with minute changes in heavy metal and chemical compound presence in the water. You’ll also have a headache dealing with fast toxin buildup in the water.

Your Betta fish will have little space to breathe, swim and develop. It will be living in unsuited water that lacks nutrition. You’ll have to constantly worry about illnesses caused by toxins or lack of phosphate and calcium.

However, if you somehow keep your Betta fish free of these issues, it won’t be happy. With a cramped space, your Betta will become bored and frustrated. Also, dealing with concentrated compounds and toxins will wreak havoc on its body.

You’ll be dealing with a Betta fish that is incredibly frustrated. It will actively try to harm itself. You’ll see it biting its tail or refusing to move and eat.

The hassle of rapid water change, curing illnesses, and wasting time monitoring the fish will drive up your monthly cost. Your cost will soar just from the treatments you have to provide for your Betta fish. Overall, this is a headache no one wants to take.

What If I Have A Filter? And What About Oxygen Pumps?

You can try to alleviate the toxin buildup and breathing issues with a filter and a pump. But a fishbowl will prevent these machines from operating as intended.

A filter is meant to get rid of the toxins in the tank. But a filter, especially mechanical ones, will have a secondary function of creating movement in the water. In a tank, moving water encourages further Oxygen saturation, and stimulates a natural environment for your Betta fish.

Most pumps that you’ll find are made for tanks. These will generate comparatively water currents in fishbowls. Your Betta fish will have difficulty swimming and in other activities.

A chemical filtration system may solve the issue, but it takes up space in the bowl. Your Betta fish will have its space further cramped.

The same concept applies to an Oxygen pump. The pump will inject Oxygen into the bowl, creating bubbles that will hamper your Betta fish’s movement. It will also occupy space in the bowl.

Keeping your Betta fish in a fishbowl is asking for trouble. You can keep the Betta in a 2.5-gallon water fishbowl, and it’ll live. But you’ll be cutting down on its lifespan by years and have a very grumpy fish to deal with. Considering the hassle, cost and suffering you’ll inflict, just get a tank. Your fish and your future self will thank you.