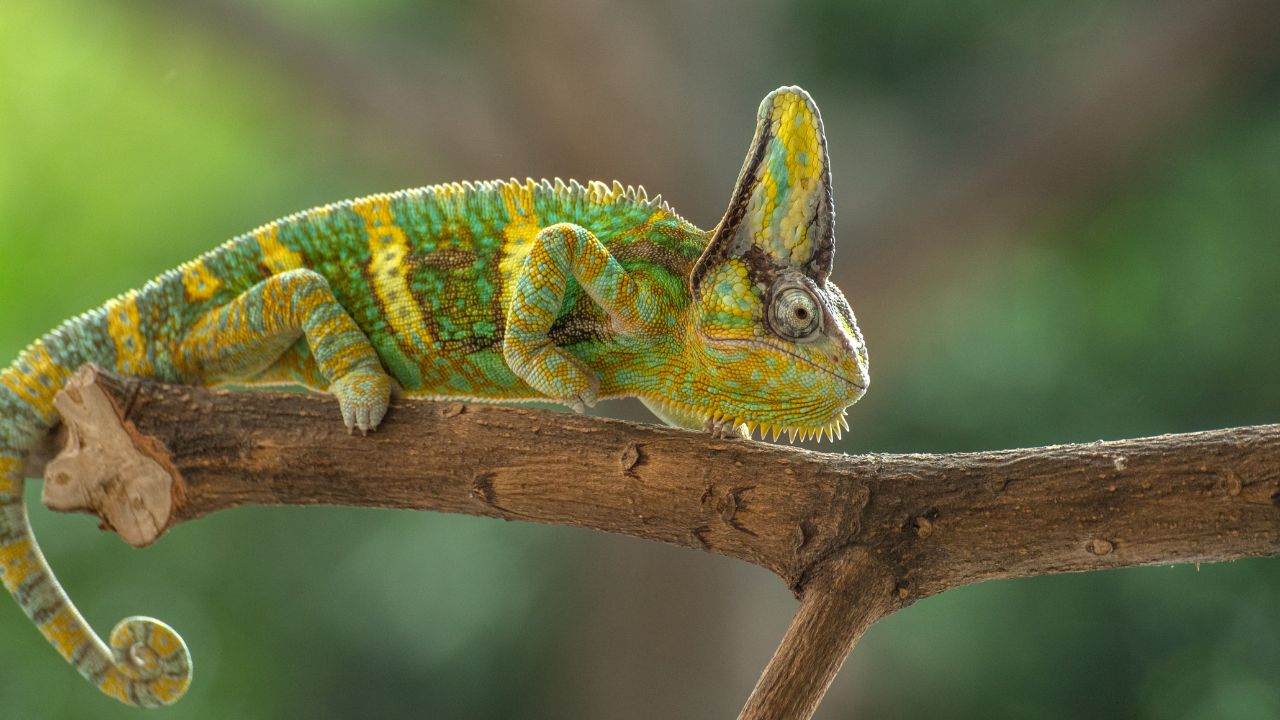 Are the chameleons the most colorful reptile? We bet you’d say ‘yes’, for obvious reasons. But are they the fastest? Well, we don’t think the term ‘fast’ will exactly go with their nature. But there should be a number on their movement, which we call ‘speed’, right? So, how fast are chameleons exactly?

It’s said that these color shifters can reach a speed of 21 miles per hour, which we think is pretty impressive compared to their size and nature. But you won’t see them running unless they’ve got a reason to do so and by reasons, we’re pointing at predators.

But how can they hunt down their prey with that kind of speed? After all, as far as we know, their food is mostly insects, and they’re anything but slow. Well, let’s just say, the ‘speed’ is not only limited to their legs.

Like we said before, they don’t run until they’ve got a reason to do so. If you’ve made up your mind to have a chameleon as your next pet, you should expect it to move gently and carelessly like nothing else. Since chameleons typically only flee when they are scared, there shouldn’t be many opportunities for them to do so in captivity.

But, in the woods, numerous other species, such as snakes and various kinds of mammals, can turn the chameleons into their next meal anytime. So, running for their lives in such situations pretty much doesn’t come with any other option.

One of the biggest benefits chameleons enjoy is that due to being an arboreal species, as long as it stays in the trees, it has a lower risk of being eaten by a predator. But luck doesn’t play always in their favor. So, they need to be ready for anything. And guess what? The chameleon’s top speed can reach almost twenty-one miles per hour once it detects danger.

But don’t expect them to hold that number on their speed-o-meter all the time. Though on unwanted occasions they can catch higher speed, you shouldn’t expect the typical speed of these lizards to go more than 15 miles per hour.

Which One is Faster – Chameleons or Their Tongue?

A chameleon can grab insects within the blink of an eye, and all the credit goes to the remarkable speed of its tongues. After all, chameleons’ swift tongues are too quick for insects and worms to match. And any guesses on the speed? Well, it’s something like 0-60 in hundredths of a second, especially in some of the smaller species.

Chameleons have unusual gait and move at a ‘super-slow’ pace. They’re so slow that you won’t see them taking more than a step at a time. But that doesn’t mean they haven’t been seen to run on rare instances.

These reptiles can move rather swiftly once they sense danger. Even some of the reports claimed that they’re capable of moving at a speed of 21 miles/hour. Clearly, a chameleon will flee for safety if it is extremely afraid and feels the urge to protect itself. But apart from that, it will move more slowly compared to most of the other lizards.

But when it comes to speed, the tongue will always stay superior compared to the initial speed of the lizard. The tongue of a chameleon can grow to be twice as long as the reptile itself, and it can be used to hit its target with extraordinary speed and accuracy.

A chameleon’s tongue can reach speeds of up to 10X of its body. To be more precise, around 60 miles per hour and that’s within 1/100 of a second. The tongue can also twist around and grab the prey. Clearly, that’s what makes it harder than ever for the insects to escape.

Their tongue’s size and muscular composition allow them to generate a significant amount of force, while the tongue’s suppleness makes it easier for them to store the energy and later on release it very promptly. The tongue’s hydration level also affects its speed. Actually, the fact is, a well-hydrated tongue can move more rapidly than a dehydrated one.

A chameleon’s tongue is fascinating in a number of other ways, too. If you’ve had the chance to study their anatomy, you’ve probably seen the name of a bone known as the hyoid. It connects the tongue to the skull of the reptile. In addition, these lizards can easily grab their prey with the help of a sticky coating on their tongue.

And guess what? The tongue can detect the temperature, texture, and taste of its prey. Interestingly, all of these aids the chameleon in deciding whether it should or not have a bite on the prey.

What Makes Chameleon Tongue So Fast?

In order to understand how the chameleons hunt for their food and their tongues works so fast, a team of researchers from the University of Oxford has separated the process into three distinct phases.

The chameleon’s tongue has three parts – the first one is the tongue’s sticky pad at the tip and the second one is the accelerator muscles that propel it. The last one indicates the reptile’s retractor muscles, and the whole thing is coiled around a little horn of bone in its mouth known as the hyoid, much like a sock.

At repose, the hyoid bone is surrounded by a coil of muscle, and the intralingual sheaths (or you can just call them elastic collagen tissue layers) sit above this coil. The acceleration muscles contract and the tongue is propelled off the jaw.

The researchers found that the tongue’s ability to contract and extend mechanically, as well as the orientation of collagen fibers within the sheaths and muscles, all play a vital role in the firing process.

Their computational simulations demonstrated that the firing mechanism’s efficacy could be modified by adjusting several parameters, such as the angle of the fibers and the breadth of the sheaths.

Like lots of reptiles out there, a chameleon too slows down on the metabolism part in the winter. But surprisingly its tongue remains active for capturing prey, even in the hard-hitting low temperature. Predictably, this has recently turned into a subject of study where the researchers have tracked two reasons. One, the tongue is simply resistant to cold, and two, it does not use direct muscle contractions.

The veiled chameleon is ectothermic, which we know as the ‘cold-blooded’. This means it relies on the ambient temperature to maintain body temperature. Its muscles aren’t as efficient in cold weather as they are when it’s warm.

Under a research, scientists have discovered that the chameleon’s tongue is capable of accelerating at 41 Gs. And the amount of distance they can cover? Well, twice their body lengths. But the interesting part is, this process allows them to get extra benefits in the winter. Up until recently, researchers thought the chameleon’s unique mechanism for firing its tongue out was used exclusively to generate the speed required to grab insects.

Ectotherms’ ability to move quickly, grab food, and avoid predators usually gets severely stunted by the cold. Frogs, for instance, can lose their jumping ability drastically when it’s chilly outside.

Because of the unique mechanism that controls the chameleon’s tongue, the reptile can successfully eat in environments with temperatures ranging from around 3.5°C to  39°C, whether it’s in the desert or mountain.

A muscle in the tongue contracts, stretching the elastic tissue there. When the energy is released, the reptile’s tongue rushes out to seize the prey, growing to its maximum length in under 70 milliseconds. This means they can grab their prey before you can blink your eye.

Chameleons are intriguing creatures for many reasons, and clearly, their remarkable ability to blend in wherever they go leaves the audience amazed. They are sedentary animals who would rather lounge in the sun rather than sprint in their cages.

But that doesn’t mean they can’t move quickly when necessary, especially when there’s a threat roaming around. Actually, a chameleon’s top speed can reach up to 21 miles per hour, and for their tiny structure, this number is impressively high.