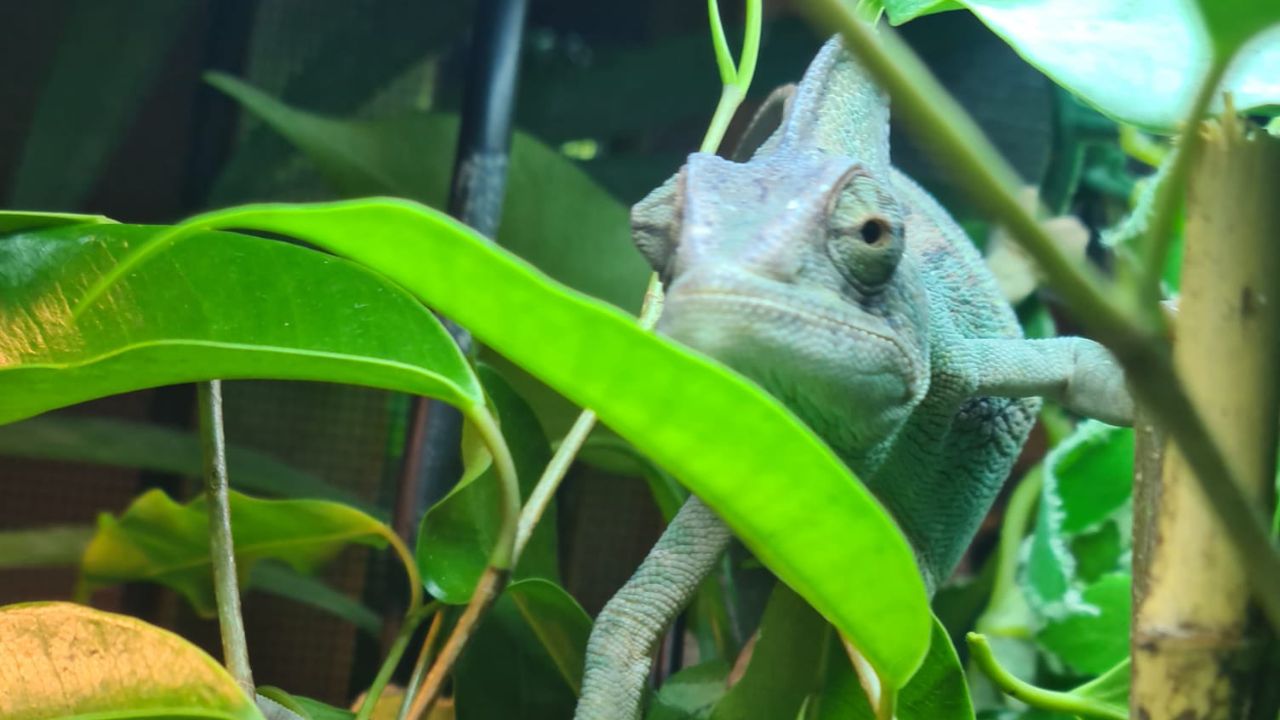 Yes, chameleons do make noise, but if your definition of ‘noise’ is loud sounds, then chameleons are not going to fit in there. They do make different types of sounds, but none of them can be listed as ‘high pitch’ sounds.

But how would you know what they’re trying to tell you with those sounds? And what kind of circumstances make them violate their silent nature? Well, for the answers, you’ll have to scroll a bit down.

What Kind of Noises Do Chameleons Make?

If you’ve noticed all the animal species around you, we bet you’ve never heard them sticking to a single type of sound or noise. That’s because, without that variety, they won’t be able to ensure the variation in their communication. And like we mentioned before, chameleons too come up with different noises.

We’ve so far noticed 5 of them.

One of the most common sounds that you’ll hear coming out of a chameleon is hissing. Yes, chameleons do create a hissing sound when they are frightened, furious, or threatened by vividly colored clothing and another chameleon. Sometimes they do that out of no reason.

Since chameleons are reptiles, there’s nothing to be surprised about if they exhibit this kind of sound, and to be honest, hissing is kind of a normal act for these color shifters. We’ve shared a bit more of our view on the topic in this blog post of ours.

The thing is, similarly to many other animals, chameleons have a wide range of distinct personalities. Some of the chameleons hiss more frequently than others. But more or less, all of them are grumpy at some point. While others keep the pitch level of their hiss low, similar to sigh-like noises, others hiss quite fiercely.

You’ve already heard about their most obvious noise – the hissing. So, let’s just move on to the more peculiar aspects of their behavior. Starting with the hooting noise will be better, we guess.

Well, no, you haven’t wandered into another universe where you are seeing chameleons learning owl hoots. The interesting part is chameleons do produce a hooting noise. Not all the color shifters, but some of them really are unique enough to pull off the hooting noise.

One of the recent researches has shown that certain chameleons use a low-pitched hooting sound in order to communicate with one another. Though inaudible to human ears. After all, our ears are not designed to take in sounds of such low frequency. Even some of the other animals have been able to produce sounds of similar frequency.

These vibrations run through the branches and can alert other chameleons. They usually apply this technique whenever there’s a presence of danger or when they want to communicate with possible mates. The research has also mentioned that these reptiles are able to suppress these noises, thanks to the resonator anatomy in their tracheas that has made it all possible.

Like we said before, not all chameleons come with that kind of anatomy. But if you’re still asking for names, we’d say check out veiled or panther chameleons if you have any of them.

It has been proved that chameleons are capable of producing a wide range of sounds for various purposes. But not every owner will agree to the fact that they can squeak too. Well, some of the owners will say the opposite of so as well. After all, they think that a chameleon’s squeak conveys a message of aggressiveness or excitement.

But the thing is, they make this kind of sound only when they’re battling with some sort of respiratory infection. Thankfully, they don’t make squeaking noises frequently. If that kind of sound is hitting your ears, the first thing you need to do is check your reptile’s mouth.

Run to the vet as soon as possible if you’re seeing signs like excessive mucus production. In this kind of condition, most of the vets won’t suggest anything but antibiotics. Clearly, that’s enough to understand the severity of the condition.

But to be sure on the infection part, we’d say you better look out for the other symptoms as well, including loss of apatite and excessive mouth gaping. Refusing to go for the basking spot to take in the heat can also be a sign of such infections.

Well, this one isn’t exactly their part of communication. This is probably the most typical noise made by a chameleon as it moves between the leaves of the plants in its cage. And isn’t it pretty much obvious? After all, you’re putting the reptile in a ton of foliage in there.

So, walking silently without making any noise is kind of next to impossible for the lizard. And if you’ve given your reptile a screened cage, you’ll also hear the sound of scratching as they attempt to scale the sides.

There is a possibility that your chameleons will occasionally surprise you with unusual noises of their own. One of the noises might sound a bit like someone heaving a sigh. This noise is typically caused by the little hisses that chameleons produce.

In addition to that, chameleons are capable of producing another unusual sound. Any guess on that? Well, they make a sound that is nothing but teeth grinding against one another.

some of them usually make this kind of sound after gaping their mouths and then closing them again. And if you’re asking for a time or situation of them doing it, we’d say they do it mostly when they’re angry. By the way, if you’re expecting them to do it every now and then, well, that’s not going to happen, as it’s a rare action.

Like any other animals on earth, chameleons too make noises. And why shouldn’t they? After all, it’s a part of their communication process. Thankfully, it’s not the only process, as they’ve got their changeable colors to tell their owners how they’re feeling. But still, the noise plays an effective role in expressing their emotions accurately.