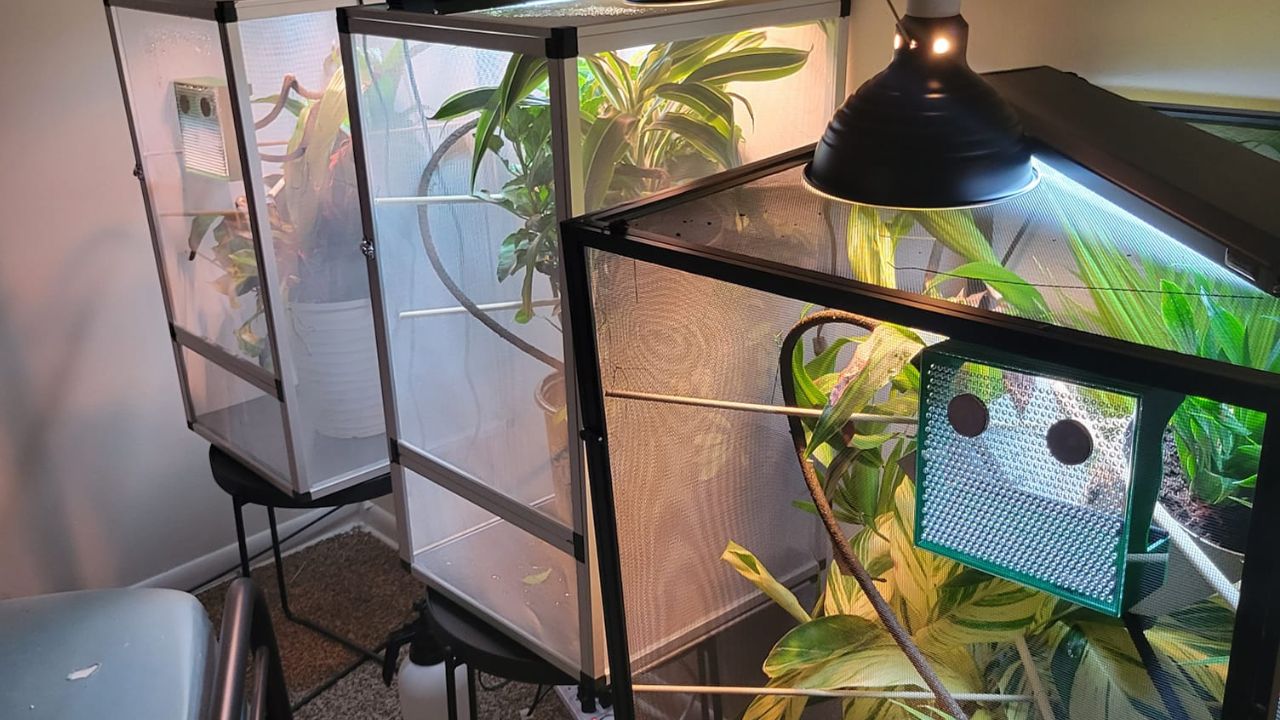 No matter which pet you own, you’d always want to give it the best place to live in, right? Well, we’re guessing you’d want the same for your pet chameleon. But unlike regular pets, you just can’t make them a bed around the corner. So, what about keeping them in an aquarium or fish tank?

Well, you can put a chameleon in a glass tank but a fish tank is not the best place to keep a chameleon. Not only fish tanks lack the required airflow, but it’s comparatively hard to ensure the proper temperature in there for the lizard.

But there are a bunch of people out there who put their chameleons in a fish tank, how they’re doing it then? Or is it just depending on the species? Well, that’s what you’re about to find out.

Why a Fish Tank is Not the Right Place for a Chameleon?

Chameleons have a set of particular reasons for not being a fan of aquariums or fish tanks. After all, this kind of cage prevents them from enjoying some crucial elements for survival including fresh air. But that’s not the only reason why you should always be going for the right enclosure rather than any random fish tank. The list of causes starts with –

Do you know what chameleons never fall short on while living in the wild? The airflow. But they’re not going to get enough of that when you’re putting them in a fish tank. If you’re letting your lizard fall short on fresh air circulation, then there’s a high chance of them being affected with respiratory problems.

On top of that, lack of airflow will also trigger issues like overheating, which ultimately can make your cham seriously sick, and even can lead to death. The sole source of airflow in an aquarium is the top, but that’s only when you’ve covered it with mesh or kept it open.

Some of the chameleon owners think of getting glass terrariums too. But they’re not going to do any good, just like the aquariums unless you’re getting the well-ventilated models. Those terrariums can pretty much keep the airflow up to the mark and hold the right temperature for the lizard.

But if you’re planning to get the meshed enclosure, that’d be the best one for your four-legged friend. After all, they ensure proper airflow as the sides are made of meshed screen. The front and back of some of these are made of glass but that doesn’t mess with the temperature. But all side meshed ones are more preferred here.

If you’ve got a chameleon, you simply can’t skip the misting part. You need to mist the cham for twice at least every single day. But when you’re trying to do that in an aquarium, we don’t think you can pull off the job as smoothly as you could’ve in a screened enclosure.

When you’re using the aquarium, you might have to do it manually and get too close to the cham. That can get them stressed and if there’s anything that can affect a chameleon more then it’s the stress. But when you’re using a screened enclosure, you can easily install a misting system that can water up the cage without you getting close to it. If you need to know more about this, you can simply check that out here.

With all those glass walls around, you’re not expecting that water to evaporate that easily, are you? This means whenever you’ll do misting, there will be a ton of water with nowhere to go. And in case you didn’t know, this can lead the reptile to major health issues.

All of these can be prevented with the screened enclosure and the right turf. It’ll simply increase the evaporation and in no time, the misted water will be gone. But that doesn’t mean you shouldn’t install a proper drainage system there. After all, not all the time the air will be enough to suck in the water.

Climbing is a natural habit of chameleons and they love to do it. They prefer climbing to the top and staying above the ground as much as they can. But when you’re putting them in an aquarium, they probably not going to get the proper taste of climbing there.

We know what you’re thinking. What if you’d give them a taller aquarium, right? Well, some of the aquariums are indeed tall, but they’re not tall enough to let the cham have the feeling of climbing higher, as they do in the wild.

But that’s not the only problem with the tall aquariums. They’re quite tough to find, hard to install, and most of all, quite expensive. On the other hand, screened enclosures are comparatively cheaper and their height is also up to the mark, as they’re specially made for reptiles like chameleons.

You can simply call this part the toughest one to pull off. After all, that varies on the type of chameleon you’ve got. If you’re owning a veiled chameleon, sticking to a humidity level of 50% will be enough for the lizard. But when you’ve got a panther chameleon in there, you need to push the level up to 70%.

On the other hand, mesh and well-ventilated terrariums or screened enclosures can ease up maintaining high humidity. Along with that, a good misting system like MistKing MKSMS5-125-50, drippers, foggers, and live plants can help in increasing humidity.

Which Chameleon Can Survive in a Fish Tank?

The good news is – not all chameleons need a large enclosure to live as a domestic pet. If you’re looking at the pygmy chameleon, it’s quite a low-maintenance creature. So, if you’re asking for a chameleon that you can keep in a fish tank, we’d say this one is your catch.

Even if you’ve got a five-gallon tank in your house, you can still turn it into the perfect living place for a pygmy chameleon. Rather than climbing higher, they prefer moving horizontally, unlike the regular chameleons you know or saw.

As they’re good enough with the fish tanks, you won’t have to deal with much of a hazard to set things up. These non-climbing reptiles do know how to enjoy their life on the forest ground. So, if you’re providing them with a place that is well-decked with plants, they’ll find it a perfectly livable place. After all, they need the plants to consider it a good place to hide and feel safe.

By the way, there’s no need to worry about live plants. You can put in the synthetic ones too if you like. That won’t bother them for sure. And putting live plants in there might have its own share of drawbacks as you’ll have to make sure that they’re staying alive. So, synthetic ones will also do the trick.

But that doesn’t give you the scope of leaving them dirty. Whether they’re fake or real, you better make them clean before you put them in. That’s because if you’re placing in the real ones, there’s a chance of pesticide intrusion here. On the contrary, artificial plants can carry harmful germs that might make the chameleon sick.

And as you’ll have to use substrate, you can try coconut bedding and thickness should be something like 2-4 inches at least. Also, you need to put a pebble layer under that bedding. That layer is essential as it’ll help the plants to drain. Also, put in some branches and small sticks that they can use for climbing.

Keep the Temperature between 70°F to 80°F for Pygmy chameleons. Thankfully, you won’t have to deal with anything else on that part as they don’t ask for creating any temperature gradient and don’t need any kind of UVB lights. So, some of your bucks will be saved there for sure. That’s because in the place they live or on the forest floor, the sunlight usually doesn’t reach that easily.

Apart from that, you should maintain the same light cycle here which is 12 hours off and 12 hours on. And if you’re asking about humidity, it’d be best if you can just keep it between 60-80 percent. Also, mist the habitat as you would’ve done for a regular chameleon – twice a day.

Okay! We agree that arranging a fish tank or aquarium is much easier compared to setting up those screened enclosures. But a chameleon is nothing that you can buy in a rush or can keep in any random setup.

You need to ensure a proper living place for the reptile. Otherwise, you might not be fortunate enough to have the lizard for a long time by your side. So, to be on the safe side, skip keeping your chameleon in a fish tank, unless you’ve got a pygmy chameleon.