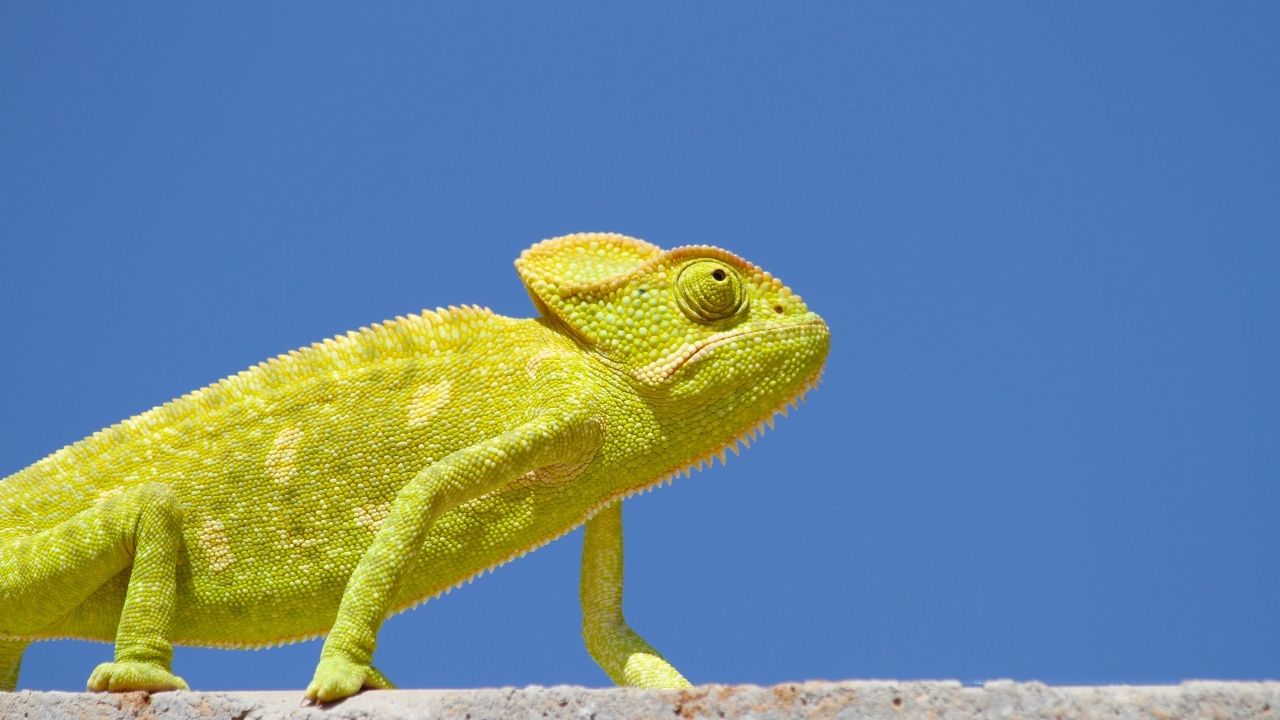 It wasn’t that late when people used to think that only owls and bats could see in the dark. But that idea started to change after people knew that reptiles too could see after the sun goes down. Well, we know you’re not thinking about all the reptiles but specifically of chameleons. So, can they see in the dark too?

Chameleons can’t see in the dark. Like all the other diurnal animals, they too can see better during day time. But Chameleon’s night vision is simply poor. That’s why they generally sleep at night.

However, chameleons are adept at sensing UV light, but maintaining regular lighting settings is what we’d suggest in the first place though.

But why can’t they see in the dark? After all, some of the other major reptiles like Geckos and Alligators can. Well, you need to jump in to find that out.

Why Chameleons Can’t See in the Dark?

Like any other animals, chameleons too have gone through major evolutions over hundreds of years. Through these, they’ve attained some unique abilities but seeing in the dark is not one of them. But why? Well, for the reasons like –

It’s possible that chameleons haven’t developed better night vision in all those years because they never needed to use it. The physiology of any species of chameleon has developed in such a way that it can repair its own body in response to its specific demands.

In other words, the chameleon’s lack of ability to see in the dark is due to the fact that its body has not developed in such a way. That’s because the lizard does not require it or seeing in the dark is not that essential.

It’s a known fact that chameleons are diurnal reptiles, meaning they’re only active during the daytime and sleeps at night. Clearly, that’s one of the reasons why they don’t have very strong night vision as it’s not necessary. Actually, you’d never catch one awake at night, unless there’s an extremely unusual circumstance.

On top of that, a chameleon wouldn’t require its night vision as it sleeps through the night. If you’ve had your chance to research nocturnal animals, you’d see that they’ve got strong night vision only because they remain active at night. Lots of them even go hunting when the sun goes down.

Because of how their eyes are constructed, chameleons are unable to see in dim light, yet they have excellent color vision. Clearly, this is a trait that you won’t see too many animals sharing.

By the way, the eyes of the chameleons are specially designed to function well in UV light. As their eyes are photoreceptive, they face no trouble seeing in bright light and can even distinguish between different hues. However, even with such kind of unique ability, they’re not good at seeing in the dark.

Their vision there is so bad that even humans can see better than them when the light goes off. We guess that one fact is enough to understand that chameleons’ eyes do not function like those of the other creatures that can see in the dark. But that doesn’t mean they’re any less than the other reptiles when it comes to other aspects.

Since chameleons can’t see in the dark, it’s best to keep a UV light in their enclosure as this will allow them to adapt to their surroundings. But they don’t get that in the wild. So, seeing what’s around them becomes next to impossible in there.

To ensure your chameleon has a good view of its surroundings at all times, day or night, you can simply install UV lights in its enclosure. Furthermore, there are certainly additional advantages to using UV lights, and the prime one is the chameleon’s color vision changes under UV light.

However, the UV lighting inside the chameleon’s enclosure shouldn’t be too intense, as chameleons don’t require much illumination at night. After all, they’re not nocturnal and prefer to sleep then. So, when you’re putting a UV light in there, make sure that it’s not hitting them hard on the eyes.

Do Chameleons Need Light At Night?

Although chameleons are well-liked as pets, not all owners are aware of the proper night-time routine for their reptiles. It is not uncommon for owners to purchase night lights for their Chameleons. To what extent, though, is this a smart plan?

First, unlike nocturnal creatures like snakes, chameleons are awake during the daytime and rest at night. Furthermore, chameleons stand out from the rest of the animal kingdom due to their enhanced ability to detect UV and infrared hues.

Because of this, keeping a light on in their cage at night would greatly disrupt the chameleons’ sleep and they still can see colors there, even though we can’t.

At night, chameleons look for the darkest corner of their habitat to get the best possible rest. Actually, when it comes to chameleons, even just your usual room light might be enough to mess with their sleep at night. So, not keeping the light turned on will be better for the reptile as they don’t need it. And if you’re still feeling like you need to know more on this topic, just click here.

What is the Role of Light in a Chameleon’s Life At Night?

You already know that chameleons can’t see in the dark. But does that mean they need no light at all at night? Well, no they don’t. If you’re planning to keep a chameleon as your next pet, you need to make sure that you’re keeping it away from lights at night as well, for the following reasons of course.

For obvious reasons, reptiles can’t just look at the watch and tell the time. Their sole means of telling time is by the sunrise and sunset. So, once the sun goes down, the next thing you’d see all a chameleon doing is starting to relax or sleep.

Usually, when the sun starts going down, these reptiles count it as an indicator for them to get prepared for sleep. After that, they’ll go locate a safe location to hide out for the night.

However, chameleons in captivity are rarely allowed to bask in the sunlight.  It’s the light you’re putting in their enclosure work like their sun, which is also their sole source of warmth. So, when you’re shutting the light down, they think the sun has set too. So, if you leave lights switched on for the night, they’ll assume that it’s still daytime.

If you’re asking for a reptile that can be easily manipulated, we’ll take the name of chameleons in the first place. They will presume it is sunlight, till you’re turning the light off, as this is how they determine the passage of time.

The chameleon’s ability to sleep will be severely disrupted if it begins to believe that night has already passed. Clearly, even chameleons, with their incredible versatility, need sleep to function properly. It helps them to recharge after a long day of activity. If a chameleon doesn’t get enough shut-eye, it can’t stick to it’s healthy state and can possibly perish.

Despite the fact that regular lighting would disrupt a chameleon’s rest, there is a special kind of light that may be used to other uses. If you’re asking for a suggestion, we’d say you can try something like the Reptisun LED UVB to serve the purpose.

How to Keep a Chameleon Warm at Night?

Whether it’s hot outside or chilly, your lizard needs a constant, stable temperature of the surrounding. You may need to come up with strategies that don’t require the use of night lights to do that. But what are they? Well, here’s the list.

Heating Up the Room Instead of the Enclosure

It’s more efficient to heat up the entire room to the correct temperature rather than placing the heater in the reptile’s enclosure and heating it individually. This way, you won’t have to think about switching on the heat lamp in the first place. After all, the infrared light given off by heat lamps might disrupt the lizard’s rest.

If you own a bird, you’ve probably seen how most people cover its cage. A similar experiment is possible here. To serve this purpose, you can just pick up some fabric that won’t let the chill in and cover up the whole thing with it. It will assist in keeping the cage at a comfortable temperature, especially in extremely cold conditions.

The chameleon, a remarkable species capable of transforming its appearance, requires special attention so that it may thrive in captivity and develop to its full potential. Even though chameleons lack the ability to see at night, this is not a problem for them because their anatomy is tailored to keep them asleep during the night.