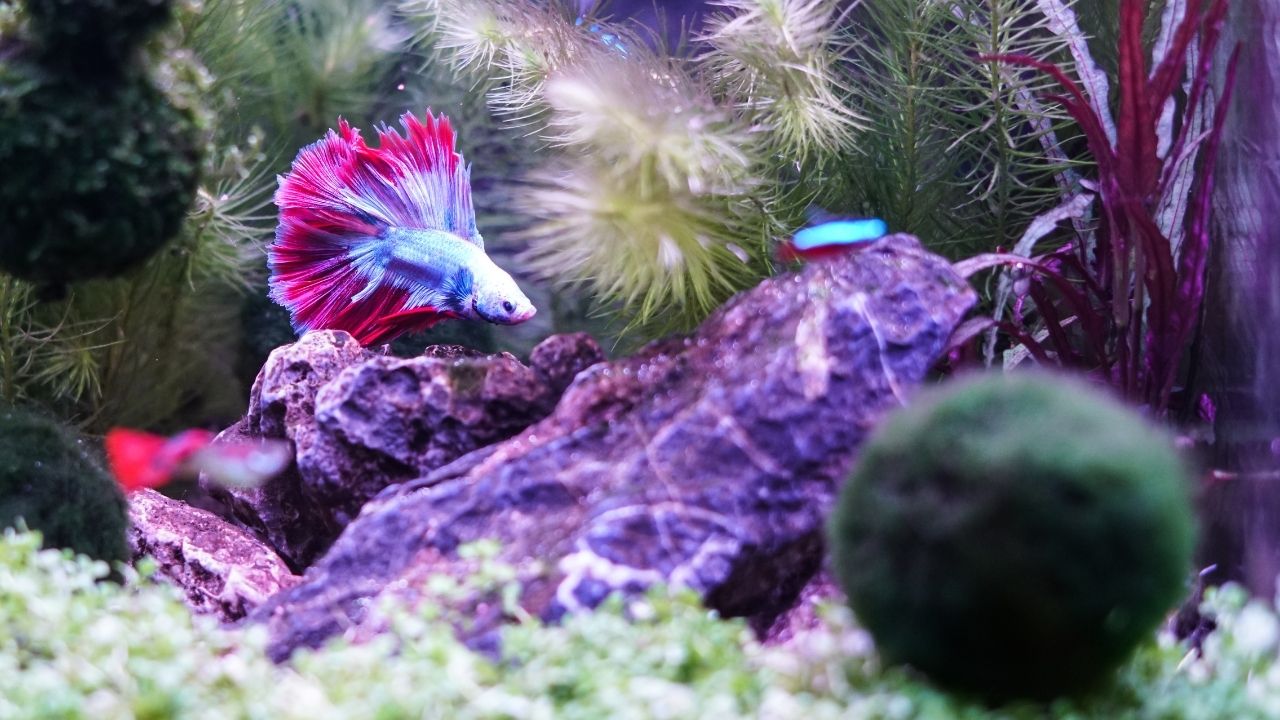 Betta fish can play dead like other fish. They do it typically to save energy, while sleeping or fooling a predator.

In the wild, betta fish pretend to be dead to save themselves from predators. Sometimes, betta fish play dead to catch their unsuspecting prey. But, the betta fish may appear dead for various health conditions in captivity.

You might have many curiosities in your mind regarding betta fish playing dead. So, why not go through the whole article?

Is My Betta Fish Sleeping Or Dead?

The new owners might become confused between sleeping betta and dead betta. Since betta fish become still with open eyes during sleep, people may misunderstand them as dead.

The easiest differentiation way is to notice the eye and gill movement of betta fish.

Whether the betta fish is awake or asleep, these bettas will breathe until they are alive. If your betta fish are asleep, they will draw water with the help of their mouth. In the same way, the sleeping betta tends to let out the water through their gills.

For details, you can take a look at this article.

Why Do Betta Fish Pretend To Be Dead?

If you find alive betta looking dead, there must be some reasons. I’ve summed up some potential reasons why betta fish pretend to be dead. Let’s go through the following list.

Betta fish tend to sleep for 12-14 hours per day. Also, if their tank is placed in a dark corner, these fish will sleep more. So, you shouldn’t get scared thinking your betta dead. Your fish may have some sleep being still.

Betta fish can get hurt in many ways. Their fins may get ragged due to rough swimming patterns.

Also, their skin may get scratched. When these fish get hurt, they make less movement. It helps them preserve their energies.

Betta fish may act dead when they’re stressed. You need to alleviate their stress as soon as possible. Otherwise, your betta will die soon.

Several health issues can make your betta play dead. Swim bladder disorder is one of the most common illnesses where betta fish lose their ability to swim. Similarly, betta fish suffer from various diseases that make them idle. Thus, these fish stop movement.

If the betta tank is overstocked, your betta will not find much room to move freely. Sometimes, keeping a betta in a small tank can discourage the fish from swimming. As a result, your betta fish will not have much swimming movement.

Do Bettas Float When Dead?

It’s a common trait to float for any dead living. If your betta fish is dead, it’ll take around 8-14 days to float. The dead fish will start floating when its body starts decomposing.

But, you should check out your betta when it’s floating upside down at the tank surface. It is a leading sign of partially or fully decomposed dead betta fish.

Is My Betta Fish Dead Or In Shock?

A sudden shuffle in temperature can cause temperature shock to your betta fish. Although betta fish show rapid gill movements and swimming patterns in such a state, these fish may become still due to shock.

If your betta is in shock, it can cause betta to stop their movements. Although betta stops movement or responds in shock, there’ll be their gill movement. Also, betta fish may regain their skin color when they recover from the shock.

So, you should look for betta reaction and gill movement when you’re confused. Try to scoop your betta with a net. If your betta is dead, it’ll not respond.

Moreover, you’ll find no gill movements from a dead betta. Besides, you can check out the betta eyes. If the eyes of betta fish are sunken or grey, your betta fish may be dead.

Why Is My Betta Alive But Not Moving?

The immobility of betta can make you think that your betta fish may be dead. But, your betta may remain still despite being alive.

There can be several reasons behind this behavior of betta. Let’s check them out.

The most common reason for this situation is that your betta may be sleeping or resting. Like other living, betta fish also take rest or naps. In such periods, betta fish do not move from one spot. But, you can see them breathing at a steady rate.

In addition, other factors make betta fish unable to move. Wrong water temperature, poor water quality, and other issues can trigger the mobility of betta fish.

High levels of ammonia, nitrate, and other toxic components present in water can cause water poisoning. Also, the wrong water pH makes betta fish vulnerable. So, betta fish reduce their movement in such incompatible environments.

If you do not feed your betta the right amount, this can make these fish lethargic. As a result, betta fish may not move much due to not having much energy. Overfeeding can also make betta bloated. So, these fish become inactive.

Another reason can be poor lighting. If the betta aquarium does not get proper lighting, your betta fish will become inactive. Thus, betta fish do not move despite being alive.

Why Won’t My Betta Fish Move Or Eat?

In several cases, betta fish do not want to move or eat. It can be the cause of several reasons.

When your betta show such indications, you should check the environmental factors. If there is a spike of ammonia, nitrite, and other components, this water quality can make betta stressed.

Suffering from ammonia poisoning or nitrite poisoning can be responsible for reduced eating and movement of betta. Also, sudden water change can cause temperature shock, which makes betta still. Along with inactivity, betta fish stop eating due to such conditions.

You might know that the researchers claim betta fish as intelligent and smart. But, these fish do not pretend to be dead to scare off their owners. If you think your betta fish play dead for attention, this may not be true.

If you’re curious to know about the reason for the death of your betta, you can check this article describing 20 potential reasons.

What Does A Dead Betta Fish Look?

There are some noticeable signs of a dead betta.

The dead betta will appear motionless and still. You can look for the gill movements to check whether the betta fish is breathing or not. Check for the up and down body movements to ensure its breathing.

Cloudy and sunken eyes are other significant signs of dead betta. But, it can be a symptom of several health issues too.

Besides, if your betta fish is dead, its skin will be dry. The dead betta gradually loses the color of its skin. Finally, when the dead betta starts decomposing, they will float on the surface of the water.

Check out this write-up for detailed guidelines about cleaning a tank after the death of betta.