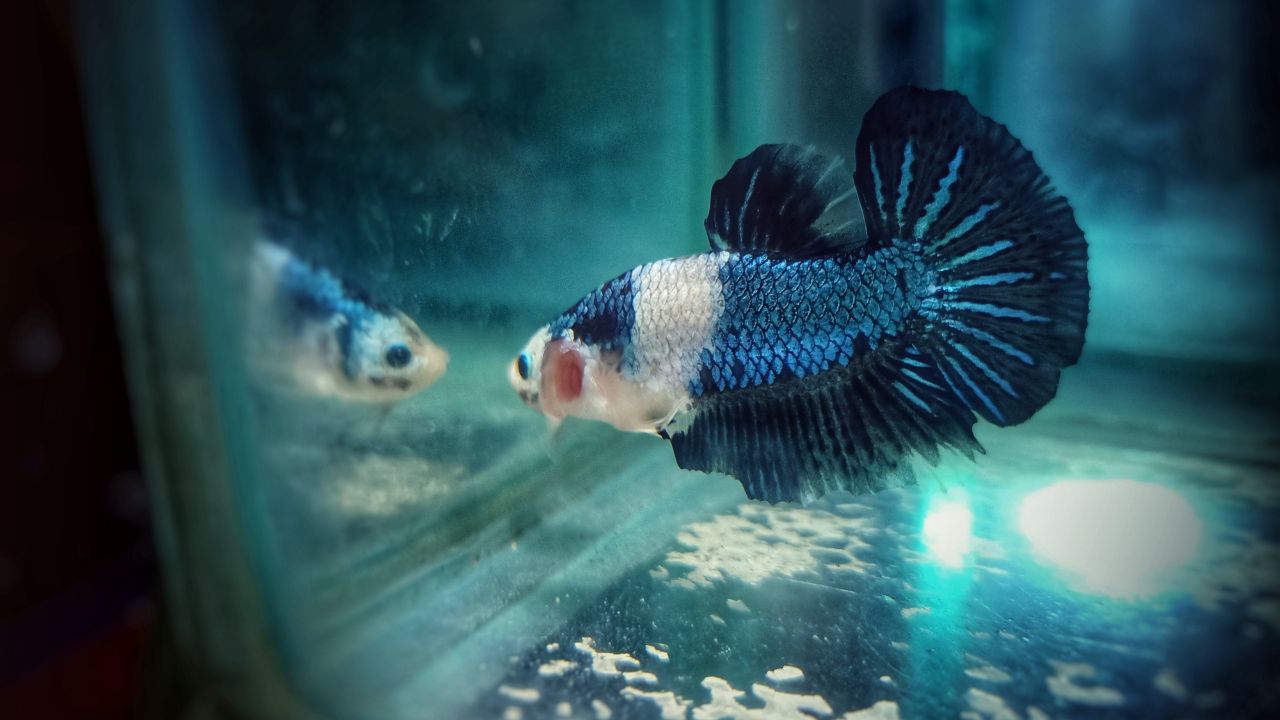 So, a lot of betta fish owners have some doubtful questions and the majority of them are regarding the food habit of bettas. One of the most common questions that circles in every betta owner’s mind are whether the bettas can eat the food of their other tank mates or not.

Therefore, in this article, I am going to give an elaborate insight into one of the most common topics which is whether betta fish can eat goldfish food or not.

Betta fish can certainly eat the food of goldfish, however, it won’t fill up the dietary or food requirements that the betta needs. In addition, we all know that betta fish are carnivores so they require more protein in their food which is not present in the food of goldfish as they are omnivores.

Goldfish are considered omnivores which is why their food will mainly be based on carbohydrates. That is why the bettas won’t get much protein from the food of goldfish and as a result the most necessary nutrient that their body needs will be unfulfilled.

In the later part of this article, I am going to elaborately discuss why bettas can’t eat the food of goldfish. Stick to the last word of this article so that you can have a clear idea about this topic.

Well, betta fish can eat goldfish food but only occasionally. Also, they can digest the food of goldfish very easily. However, that doesn’t mean you should give goldfish food to your Bettas regularly as it won’t fulfill the dietary needs of Bettas.

As we are all aware of the fact that, betta fishes are carnivores and the main nutrient in their food should be protein. Because betta fishes need a lot of protein in order to thrive in the tank as well as their body gains lots of energy from protein. This energy keeps them in shape as well as healthy.

However, betta fishes are also super picky. The food of the goldfish is mostly made of fruit and vegetables. Therefore, the betta fish won’t even eat the food of goldfish even if it is offered to them.

For your ease, in the later part of this article, I have discussed the food items that the betta prefers. So stick around till the end.

What Makes The Goldfish Food Not Suitable For Bettas?

Goldfish are considered omnivores which is why their food’s main nutrient is carbohydrates. As they require more carbohydrates in their body, therefore, their foods are mainly made of vegetables and proteins.

On the other hand, Bettas can certainly eat the food of the goldfish for a few days. But after that, they might get weak or their health will collapse.

Betta fish will need to take more than 80% of the protein in every meal. But the food of the goldfish only contains 40% protein which is half of their protein requirement for their body. Therefore, the bettas can survive by eating the food of goldfish for a few days but not for long.

What Are The Consequences Of Feeding Goldfish Food To Your Bettas?

The betta fish’s health condition might suffer greatly from a shortage of protein in its diet. You will actually notice a lot of symptoms that will simply frighten you if you are serving your betta fish the incorrect diet.

Your betta fish will attempt to obtain the necessary amounts of protein from other resources if it is not being fed or is consuming the wrong things. The very first issue that will occur if your betta fish is housed in a tank with other smaller species is that your betta will start attacking the other fish.

The tankmates of the bettas may not always die as a result of this, but they may suffer harm.

Protein Shortage Can Reduce The Size

As the food of goldfish contains less amount of protein which is why it can actually reduce or obstruct the growth of the betta fish. A betta fish that is living on a poor diet can have a size of 4cm to 5cm which is below-average size.

Your Bettas Won’t Be Eating Anymore

Your betta fish may give up eating when the food it is receiving isn’t nutritious enough for them. Anxiety and stress are two more severe symptoms that might develop as a result of this issue. You’ll observe a behavioral change and appearance of your betta fish if they are getting a poor diet.

Do Betta Fish Have a Chance of Dying After Eating Goldfish Food?

Well, there are no chances of dying for betta fish after consuming the food of goldfish. However, there are some special things that you will need to keep a close eye on if you are offering goldfish food to the bettas.

Moreover, your bettas will surely die if they keep on eating the goldfish food regularly. Because the protein percentage in their body will decrease as a result and betta won’t be able to survive for very long.

What Are The Foods That Are Appropriate For The Bettas?

There are a variety of foods that can be the best substitute for the goldfish food for your bettas. So in order to ease your difficulties I have noted down all the names of the foods that are appropriate for your bettas:

To be the ideal supplement to your betta’s food, these flakes are manufactured. The food flakes typically have all the resources they may possibly require.

These flakes are ideal if you’re searching for a short and simple replacement for your standard goldfish food, although they are less nutrient-dense than freshly made food. Furthermore, you won’t often need to worry about bringing new items to their meals.

For your betta fish to mimic their natural diet, you can feed them these often larvae or bugs. You should be aware that dried food is frequently less nutrient-dense than frozen food when choosing between frozen or dried foods.

In actuality, almost all of the nutrition normally present in the larvae are gone as the moisture is drained from the package.

The live foods are unquestionably the finest for your betta fish. However, this method has a number of shortcomings that frequently prevent most owners from giving them to their betta fish.

Finding a vendor who is fully equipped with appropriate farms is necessary to purchase such kind of stuff, and bigger jars are required to hold live food.