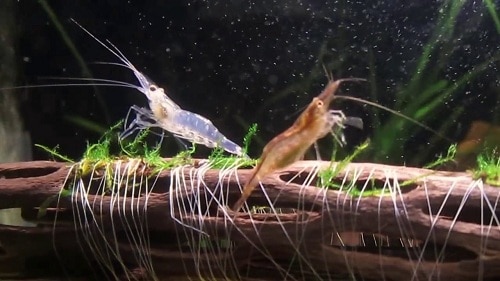 Who wants to miss the wild chance to keep such a shrimp which is translucent? Although people often become confused between whisker shrimp and ghost shrimp, their temperament is opposite to each other. Hence, the new owners and hobbyists often ask- are whisker shrimps aggressive?

Whisker shrimp have a bad temperament. These transparent shrimp are much territorial and aggressive. Also, these shrimp are solitary. Whisker shrimp tend to attack small fish, invertebrates, other species of shrimp, etc.

So, you might be worried about the aggression of whisker shrimp. In this article, I’ve shed some light on the reasons for aggression, ways of reducing aggression, and so on.

If you are an owner of whisker shrimp, you should continue reading this article to have full control over your aggressive whisker shrimp.

You might have heard that shrimp do not have any teeth. To your surprise, whisker shrimp have 5-8 ventral teeth and 8-9 dorsal teeth. These sharp teeth give whisker shrimp additional strength to attack weaker prey.

Because of their voracious appetite, whisker shrimp try to eat anything that fits in their mouth. So, these whisker shrimp remain always hungry. As a result, these shrimp show territorial and aggressive behavior.

What Are The Reasons Behind The Aggression Of Whisker Shrimp?

The experienced owners have noticed that the whisker shrimp get more aggressive when these shrimp feel congested. Whisker shrimp require lots of space to thrive well.

Moreover, when the tank is overcrowded, whisker shrimp might find other inhabitants of their competitors. As a result, these shrimp become aggressive.

As mentioned before, whisker shrimp are voracious eaters. So, these shrimp always remain hungry. If they do not get adequate food, they’ll be more aggressive.

Due to a lack of food, whisker shrimp will try to hunt other small tank mates. Moreover, these shrimp become aggressive to compete for food.

Lastly, we can blame their natural behavior or trait for their aggression. We can’t fully eliminate it as it is in their genetics. It’s their natural temperament to remain invasive and aggressive.

Are Whisker Shrimp Aggressive Towards Each Other?

Unfortunately, the answer is yes! Due to the bad temperament of whisker shrimp, the experts suggest keeping these shrimp with their species.

But, whisker shrimp can not go well with the fellow members of their species. These shrimp often get involved in fights among their species. It can be due to establishing territory, bullies, competition over food, and so on.

Thus, whisker shrimp get aggressive toward each other. In addition, there are several examples of the cannibalism trait of whisker shrimp.

Are Whisker Shrimp Aggressive Towards Other Species?

What Can You Do To Reduce The Aggression Of Whisker Shrimp?

Since whisker shrimp are naturally aggressive, you can’t make them entirely calm. But, you can decrease territorial behavior by maintaining a few rules.

Let’s see what tricks can reduce the aggression of whisker shrimp.

Let’s remind you again that these whisker shrimp has a large appetite. If their hunger isn’t contented, these shrimp will show a more territorial behavior. To control aggressive behavior, you should ensure that your shrimp do not remain hungry.

For this, you should provide adequate food to your whisker shrimp. Feed your shrimp multiple times to keep their content.

When you keep fish or other invertebrates with whisker shrimp, they might get involved in the food fight. It happens especially at the time of feeding.

Hence, you need to apply some feeding tactics. You should introduce multiple feeding spots to your whisker shrimp. Besides, you can feed your fish and shrimp at different times.

So, when you give shrimp food at a particular spot, you can feed your fish in another spot. In this way, you can avoid clashes between whisker shrimp and their tank mates.

5. Not Overcrowding The Tank

Finally, you should ensure not to overcrowd the shrimp tank. While adding more fish or shrimp, you should consider the tank size. Also, you should not overstock the aquarium by keeping unnecessary décor items or larger instruments.