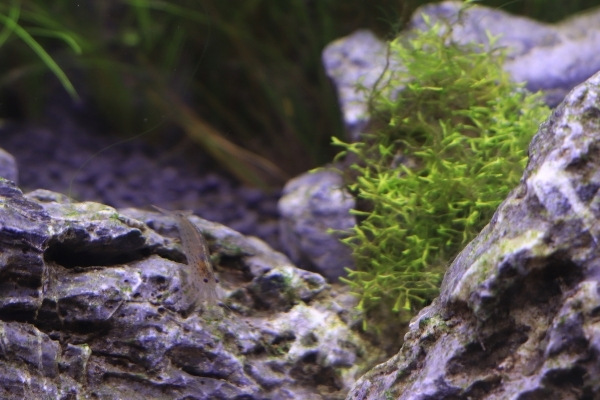 Amano shrimps are not nocturnal. They are rather more active at the night but do not sleep during the day like nocturnals.

Amano shrimps are an unpredictable species whom sometimes you will find to swim and forage for algae 24 hours a day while some of you may not even see one or two of them until you turn off the lights.

While they cannot be said a diurnal species, you cannot keep them on the same line with the nocturnal species.

What Do They Do In The Day?

It is fun to watch Amano shrimps’ algae cleaning activity around the bottom of your aquarium but the reality is you will see them when they will allow you to see!

While finding them out in the open water during the day is a matter of luck, they still hide behind something and possibly graze.

They prefer to pass most of the time of the day hiding behind some sort of shelters or decorations especially if they are kept with some bigger fishes. They also hide and disguise with green plants to avoid any potential threat.

They are naturally more active in the night but like the nocturnals, they do not sleep in the day. Shrimps do not lay down and sleep like us. During the day, the Amanos usually huddle in a place motionlessly by lowering down their antennas.

Sometimes there are some minimal movements in them. The more hiding places you will create in your aquarium, the more scope they will get to swim around during the day.

However, I have heard many cases where the Amanos are always out (even during the day) and forage for algae all the time.

Why Do They Tend To Come Out Just At Night?

So, if they are not nocturnal, why in most cases they come out only at night? These can be some potential causes.

If They Fear Any Predator

They are supposed to graze and search for food 24 hours a day. But as the shrimps are occasionally threatened by most of the other fishes and predators, they feel safe to come out from their shelter in the dark when the other fishes sleep and no one can see them.

It happens even in the larger tanks too. However, when the Amanos get bigger enough, they do not fear the other species and forage in the tank even when the lights are on.

If They Are Getting More Than Enough Food

Another reason why you cannot see them during the day can be that you are feeding them more than enough. If they get enough food without searching for it, they will not come out. If we get food timely without going out, why will we go to work? It is just like that.

If they are hungry enough, they will dart out when you offer some algae pellets or flakes and disappear as soon as they are done with it.

They Can Get Stressed From Excess Light

Amano shrimps can get stressed from bright or inappropriate light in your aquarium and hide to get rid of it. So, choose a suitable light for your aquarium.

As soon as you switch off the lights, they will dart out in groups and swim around your aquarium. If you turn the lights on in the middle of the night you will see them all over the aquarium, even in the front glass.

How Will You Reduce Their Partially Nocturnal Behavior?

As Amano shrimps are mainly popular for their algae cleaning capability, many of you might be disappointed because of their lethargic behavior during the day. You can try these following methods to bring them out during the day.

Keep Them In A Single Species Tank

To reduce their such nocturnal behavior noticeably, I would suggest you a shrimp only tank. They love to live in large troupes, but only with their species.

Feed Them Before Turning Off The Light

To bring all the Amanos out, give algae wafers/pellets just before turning off the lights out and sneak after an hour to see what happens next! If you look carefully, you might see them walking across the substrate or sitting on a plant leaves and munching something.

When you will turn on the lights in the morning, you may see the troupe of Amanos munching the foods or algae. If they do not feel well in the light, they may run into the hiding places again.

If you have recently bought Amano shrimps and kept them in a single species tank, you can encourage them to explore the rest of the tank by offering a little amount of food(algae wafers/pellets are their favorite food). They are more active when they are provided less food.

As there are no other species they will rush to take the food competing with each other.

If they get accustomed to a community tank and get larger enough, they will try to snatch the foods away before the other fishes can reach them.

Cut Back Their Regular Feeding

To bring them out in the day, you can try cutting back on their regular feeding so that they are compelled to roam around the tank all the time in search of algae and microorganisms.

Therefore, Amano shrimps are not nocturnal. They keep themselves hidden from a safety concern and also because of their extremely shy nature where you can manipulate them to come out by following the above methods.