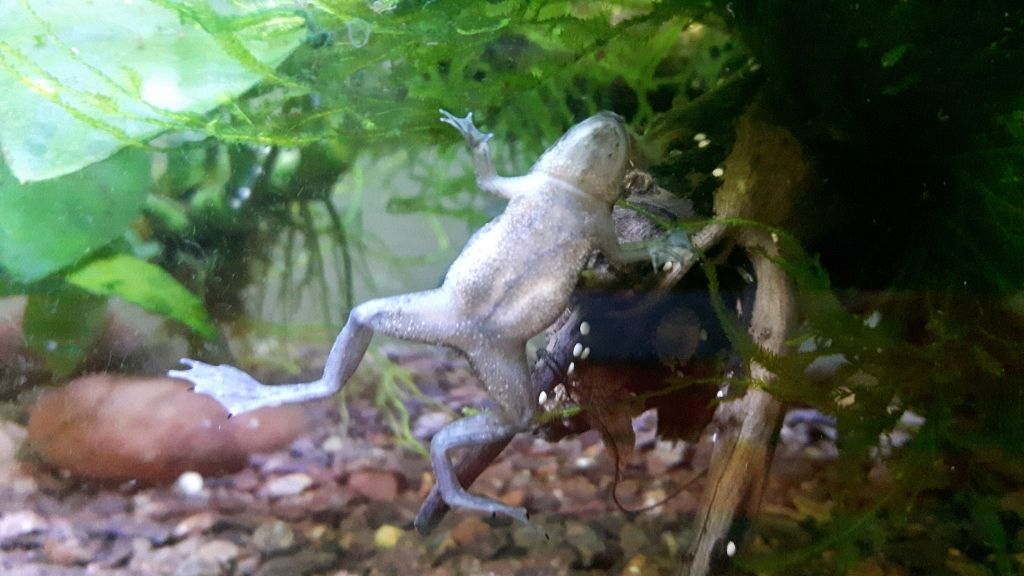 Before choosing African dwarf frogs, many beginners often wonder are these frogs aggressive? Can they live with other aquatic frogs and fishes?

African dwarf frogs are not aggressive towards each other or other fish. Sometimes the male makes sounds to attract the female for mating. Also, these frogs don’t have any teeth or claw to attack another.

Let’s take a deep look at the behavioral aspect of African dwarf frogs.

African Dwarf Frog’s Aggression Towards Others

African dwarf frogs aren’t aggressive. They’re not a threat to each other or any other fish. They’re quiet and love to live in peace. Only the male frogs make sounds sometimes to attract the female frogs. This frog has a really small body. They don’t have any claws or teeth, and they don’t have any other weapons to attack others.

They won’t be able to see that it’s a fish, and they’ll just eat it. They don’t mind if other small fish are swimming around, but they try to eat them thinking that it’s their food, as their eyesight is very bad. It’s not aggression. It’s just they are almost blind.

If anyone tries to pet them, they might try to bite, thinking the finger is their food. But their bite won’t harm you as they have no teeth. So it would be best if people kept their frogs and fish in different tanks.

If two African dwarf frogs show aggression to each other by crawling over one another or hugging for a long time, it doesn’t mean they’re fighting. It is just that they’re trying to mate.

Most of the time, when they try to mate, people think they’re fighting or behaving awkwardly. Sometimes people have thoughts about their odd behavior, but that’s really normal for them. It’s their natural and normal behavior.

The male African dwarf fog is thinner and skinnier. On the other hand, the female frogs are thicker and wider.

African dwarf frogs are friendly and socially active. They find comfort in staying in groups. They are almost like us as we like to have group chats and chill. They prefer groups of 3 or 4. People shouldn’t keep the place overcrowded.

African dwarf frogs should be kept in at least 1-2 gallons of water. They can be friendly with their kind as well as with the other fishes. Just make sure the fishes are the same size as the frogs. They can stay with the peace-loving fishes and other creatures like guppies, mollies, tetras, platies, nerite snails, etc.

These Frogs can be playful too, and these frogs are really fun to watch because of their unique and uncommon behavior. Sometimes they sit still in one place for a long time. Don’t worry, they’re not dead. They are playing dead and it is their kind of playing with themselves.

It’s just they are being themselves. People can train them or try to play with them by using their food. People can also try to train them to follow their owner by moving around the tank. But don’t touch them too much.

They can get hurt while handling them and they hate to be touched. If you’re looking at them, then that’s okay. But if you want to touch them quite often, then they will probably hate you for that reason.

Besides, they don’t like to stay in dry places. Because it can dehydrate them and it can kill them only after 20-25 minutes. Dry places are really dangerous for them. They have fully grown lungs and breathe air in the water. So this cute creature cannot be aggressive, it is confirmed.

The African dwarf frog is a nocturnal animal. They become most energetic after the sun goes down. Most of the time, they swim and play on their own. So people can find them doing some odd behavior at midnight. It is very normal for them. So don’t worry about your loving pet and leave them alone.

So we can say that the African Dwarf Frogs are harmless and they are not aggressive at all. There is no aggression or fighting spirit in their little bodies. The maintenance of the frogs is really low and can live very peacefully. The frogs shed their skin. They’re really interesting pets to have in your house and their unique characteristics will make you fall for them even more.

If the way they are crawling over one another looks aggressive, they are just mating. Leave them alone. If they are trying to hug for a day, they are just expressing their tension and emotions towards each other. This is natural for them. So worry less and love your African dwarf frog a little more today.